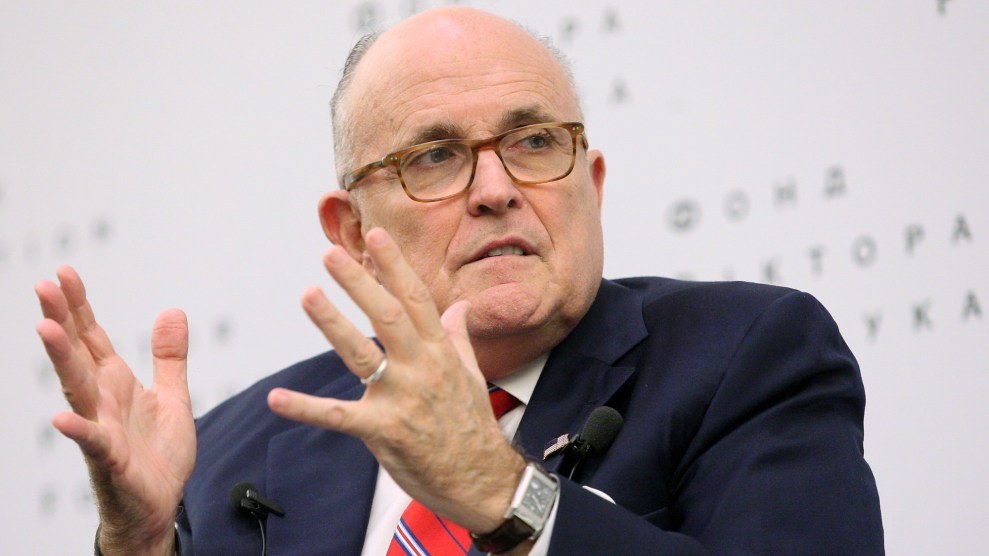 Rudy Giuliani won’t give up. Even though his crusade to manufacture dirt on Joe Biden in Ukraine led to the impeachment of his client, Donald Trump’s personal lawyer continues to use this Ukrainian non-scandal to try to undo Biden’s presidential bid. To that end, Giuliani and two associates—a Republican fundraiser and a California cannabis entrepreneur—have been trying to round up $10 million to finance the production of a Biden-Ukraine documentary that can be released this year. Documents obtained by Mother Jones indicate that Giuliani and his collaborators are recruiting investors at $1 million a pop and that they have considered the possibility of drawing in investors from overseas—though Giuliani’s lawyer denies there has been any effort to bring in foreign money. Any overseas investment in the project would raise the question of whether Giuliani, who has been looking for information from past and present Ukrainian officials for his anti-Biden work, is attempting to orchestrate foreign involvement in the current presidential election.

It’s no secret that Giuliani has been plotting to cook up a documentary focused on Hunter Biden and Ukraine that will presumably concentrate on the unfounded allegations that Joe Biden pressured the Ukrainian government to smother an investigation of Burisma, an energy company of which the younger Biden was a board member. Yahoo News reported on this effort in February, noting that the project was being led at that time by veteran California Republican fixer and fundraiser Tim Yale and that preliminary footage for the film included actors portraying Ukrainian officials and Hunter Biden. The documents obtained by Mother Jones reveal new details about this venture and its financing.

Giuliani has already produced a program promoting his Biden-Ukraine conspiracy theory for the ardently pro-Trump One America News Network. And he bangs away on this topic on his podcasts. But according to one source familiar with the documentary project, Giuliani envisions this film as the culmination of his efforts and a possible “kill shot” on Biden. “The goal is to do a documentary, get it discussed on Twitter, shown in the White House,” this source says. “It’s very propagandistic.”

According to the documents, a company named SeeView Media, which was incorporated in Delaware in February, has been set up to finance the film. Two key principals of the project are Yale and George Dickson III. In 2016, Yale was on the advisory committee of a super PAC formed to help Trump, once Trump became the likely Republican presidential nominee. Prior to that, he raised money for a separate pro-Trump super PAC established by Roger Stone, the longtime Trump adviser and political trickster who this year was convicted of lying to Congress related to the Trump-Russia scandal.

According to one source familiar with the documentary project, Giuliani envisions this film as the culmination of his efforts and a possible “kill shot” on Biden.

Dickson is the founder and CEO of Cannasortium, which is based in Scotts Valley, California. “Launching from the heart of California’s cannabis industry and with a global reach,” the firm’s website says, “the Cannasortium combines proven business models with proprietary industry expertise to create the world’s premier seed-to-consumer cannabis organization. Cannasortium represents the next-generation of cannabis companies—strategically positioned and uniquely diversified across every major sector of the industry.” Dickson has also been the CEO and president of Seismic Warning Systems, which boasted it “manufactures systems and services that provide reliable earthquake detection.” (Giuliani’s previous partners in skulduggery—Lev Parnas and Igor Fruman, who each were indicted for campaign finance violations related to Ukraine scandal-chasing—were also pursuing deals in the cannabis business. When Giuliani was mayor of New York City, he presided over a massive increase in marijuana arrests.)

The SeeView Media documents—a term sheet and draft agreements for potential investors—note that Yale and Dickson are seeking $10 million for the project, with a minimum investment of $1 million. Investors are promised a 5 percent annual return and a “profit share percentage” of 2 percent, according to the term sheet. A draft “note purchase agreement” says the money raised would be for “general working capital and other corporate purposes, with approximately 50% used for production (e.g. talent, writers, film crew, post-production activities, travel and administrative overhead) and approximately 50% used for promotion and distribution.” None of the documents mention Giuliani by name and do not state whether he will receive any of the funds that are raised. But Yale tells Mother Jones that Giuliani is the driving force of this project and that he should be contacted for any details regarding it. “The mayor is the knowledge base,” he says.

Mother Jones sent Giuliani and Dickson a list of questions about the project and repeatedly sought comments from them. Neither responded.

The draft note purchase agreement suggests that the group has considered selling shares in the project to foreigners, for it contains a clause regarding the obligations of any “Non-United States person” who signs up as an investor. According to the source familiar with the venture, the project has been seeking financial backers overseas. Giuliani did not respond to text messages asking about foreign investment in the film, but his lawyer Robert Costello says, “I’ve checked with Mr. Giuliani and you are misinformed. There are no foreign investors. There has been no money raised or solicited from any foreign citizens.” (Costello would not answer questions about other aspects of the project.) The term sheet also has a confidentiality clause: “No Investor will disclose the terms or existence of this Term Sheet to any person, other than…[those] who have a need to know.”

A project like this could run into problems with the Federal Election Commission. The documents indicate that Yale and Dickson are attempting to fashion this venture as a commercial and not a political operation. But if the movie engages in what the FEC calls “express advocacy” (urging viewers to vote for or against Biden) or “electioneering communication” (an effort clearly intended to sway voters within 60 days of a general election), the commission could regard this endeavor as no different than the work of a campaign or a super PAC. That would mean that it would be subject to campaign spending and disclosure rules. One such rule prohibits contributions from overseas. “Foreign nationals are not allowed to make political ads,” says Daniel Weiner, deputy director of the Brennan Center’s Election Reform Program.

In the case of any FEC action—which is unlikely given the FEC is barely functioning these days—Yale, Dickson, and Giuliani would probably claim the documentary is an act of journalism, not a political hit piece, and should be free of any campaign regulation. Yale insists the movie will focus on corruption in Ukraine and is not directly aimed at Biden. “I haven’t sat through a meeting [about the film] that Biden is the focus,” Yale says. “I have sat through lots of meetings that the focus is corruption.” He notes that they hope to release the movie this year but that there is no target date.

If the movie or ads for the film are overtly political, the FEC would have a case for requiring the disclosure of investors (as it does for super PACs). If there are overseas investors and any are tied to foreign governments, the project might be subject to the Foreign Agents Registration Act (FARA), and Giuliani and his crew could be compelled to register with the Justice Department as foreign agents. (In recent years, several foreign-owned media outlets, including RT, the English-language Russian media operation backed by the Kremlin, have had to register as foreign agents, even as they ostensibly produce journalism.) “If Giuliani accepts foreign funding to conduct a PR campaign aimed at influencing the US public with regard to the national policies of the US or with reference to Ukrainian national interests then there may be a FARA problem,” says Josh Rosenstein, a lawyer who specializes in FARA at Sandler, Reiff, Lamb, Rosenstein & Birkenstock

Yale, who notes that his participation in the project has decreased in recent months because he has been in Rome working on what he calls a potential COVID-19 cure, tells Mother Jones that he has been involved with production efforts for the documentary and with verifying tips that Giuliani and others have received from Ukraine. He notes that the project has collected “60 hours of video or more of people telling incredibly wild stories.” And he says, “Canceled checks and wire transfers typically don’t lie.” Yale declines, though, to explain what he means by that. He describes the film project as an effort to find “the truth” after what he says was a misleading version of events presented during Trump’s impeachment. He adds, “I’m not the producer.” As for the financing of the film, Yale says he’s not aware of any funding having yet been secured.

Last week, a Ukrainian parliamentarian named Andriy Derkach, a former member of Ukraine’s pro-Russian Party of Regions who met with Giuliani a few months ago, released edited audiotapes of conversations in 2016 between Vice President Joe Biden and then-Ukrainian President Petro Poroshenko, claiming the transcripts proved that Biden leaned on Ukraine to kill an investigation of Burisma. But the tapes proved nothing of the sort. To the contrary, they supported Biden’s account that he had pushed Poroshenko to fire a prosecutor widely seen as corrupt so the Ukrainian government could secure international loans. The release of these recordings appeared to be a continuation of the long-running Giuliani effort—cheered on by Fox News and other conservative media—to taint Biden with baseless Ukraine-related accusations. Giuliani declined to tell the Washington Post if he had known of the release of the Biden recordings in advance. But he texted to a Post reporter they are “just the tip of iceberg.”