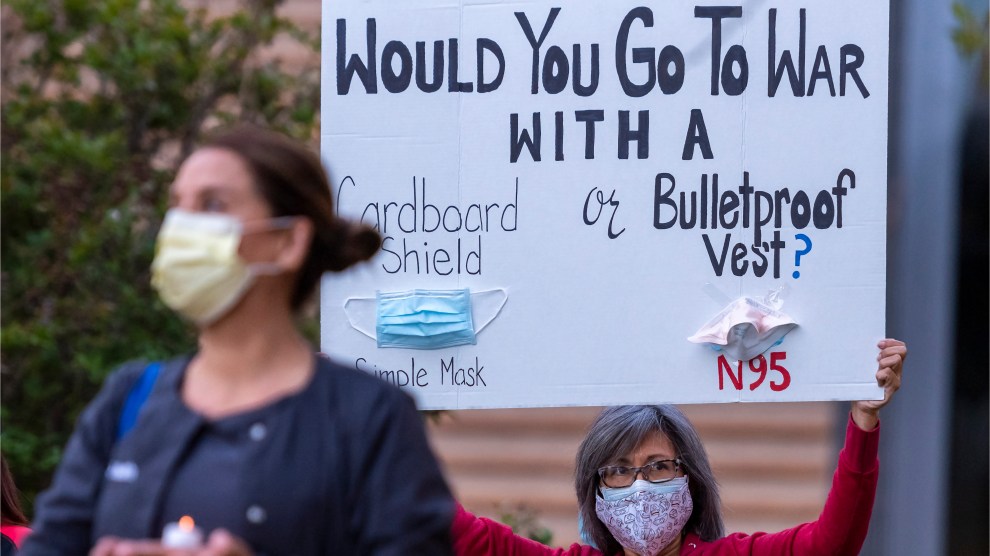 On Wednesday, President Trump held an event at the White House to salute nurses. But the gathering turned awkward when Sophia Adams, a nurse who heads the American Association of Nurse Practitioners, said that the supply of personal protective equipment for nurses during the coronavirus pandemic had been “sporadic.” Trump took issue with her statement and insisted, “I have heard we have a tremendous supply to almost all places.” But Trump was wrong—and one union that represents a large chunk of the nation’s nurses recently had to spend millions of dollars and navigate the chaotic supply-chain world to procure millions of pieces of PPE for its members. This episode shows, yet again, how the Trump administration has not adequately assisted the nation’s front-line health care workers.

In late March, Randi Weingarten, president of the American Federation of Teachers, was on a call with the heads of about 40 of her union’s locals that represent health care workers. Approximately 200,000 of the AFT’s 1.7 million members are health care workers, most of them nurses. This slice also includes physicians, technicians, and maintenance workers in medical facilities. On the call, these local leaders described how they and their members were coping with the coronavirus crisis. “It was one horror story after another about the lack of PPE and the working conditions,” Weingarten recalls. The level of fear—fear for their own lives and the well-being of their family members—was shocking for Weingarten: “These are people who are normally used to situations where they can risk their health.”

“It was one horror story after another about the lack of PPE and the working conditions.”

Following the call, Weingarten realized it was not enough for the union to organize petitions, mount protests, and hold media events to demand PPE for its members. “I said, we have to try to figure out how to procure this stuff….People are scared shitless.”

But Weingarten had no clue how to procure medical equipment. She did, however, have contacts. She knew people at Empire Global Ventures, a business development firm with experience in China, where much of the world’s PPE is manufactured. (The firm’s website boasts it “supports its clients entering China by introducing them to influential Chinese business partners, providing access to non-public Chinese deal flow, managing the Chinese governmental registration and permitting process, and supplying privileged sector-specific research on the Chinese market.”) Empire Global found for the AFT an established importer-exporter to help acquire the equipment.

What the union was looking for were face shields, surgical masks, and N95 masks. Even with help from the importer-exporter, it encountered many of the usual difficulties when seeking PPE in China. Union officials at one point believed they had a shipment of N95 masks on the way, but then they discovered the goods were likely counterfeit. “There were a lot of rabbit holes,” Weingarten says. “A couple of times, I thought this was never going to happen.”

Eventually, the importer-exporter was able to strike a deal with Chinese manufacturers to produce 50,000 face shields and more than 1 million surgical masks. “We had to pay the manufacturers before they would manufacture these supplies,” Weingarten says, noting that her union was only able to pull off these deals because it had enlisted reliable middle men who knew the ropes in China. “There were a lot of twists and turns. It sometimes costs more to have the supplies trucked from the factory to the airport than to airship it to the United States. You have to have someone escort the material through customs,” she explains. Despite the hurdles, it mostly worked out, and shipments of the face shields and surgical masks have started.

But the AFT could not swing a deal in China for the high-priority N95 masks, so the union turned to 3M. But here it also needed assistance. “If we had just called 3M and said we’d like to make an order…it was impenetrable,” Weingarten says. “But our brokers were able to do it.” 3M agreed to designate the AFT an allowable buyer—the union had to sign a letter noting it would not resell the N95 masks—and cut a deal to sell it 455,000 N95 masks. About half were to come from the United States and the rest from Sweden, where the company has several facilities. The price was $3 per unit for a line of N95 masks that had been discontinued and between $6 and $7 each for current versions. Weingarten expects to receive these shipments in the coming days.

At first, Weingarten planned to spend about $1 million in total on PPE, but that was not enough. The union ended up shelling out about $3 million.

It plans to distribute the supplies to health care providers in New York, New Jersey, Washington, Oregon, and possibly other states—that is, if none of the shipments are swiped by the US government. The Federal Emergency and Management Agency has been confiscating some PPE shipments coming into the United States. But Weingarten figures that if she publicizes the AFT’s plans, the feds will be less likely to intervene.

“There were a lot of rabbit holes. A couple of times, I thought this was never going to happen.”

The AFT considers this project a success for the union and its members. But how much of a dent does it make, given the tremendous need for PPE? “The Trump administration,” remarks Weingarten, “says that 3.5 billion respirator masks will be needed in this pandemic. But only 11.7 million have been distributed. That’s less than one-third of 1 percent. So what we’re distributing is a good percent of that. But it’s a drop in the bucket. The federal government has to do its job.”

Weingarten notes that her experience as a PPE procurer reinforces her dismay at the Trump administration’s response to the pandemic: “What the hell has the federal government been doing? How dare they not do what’s needed. It’s the entity in the best position to manage the supply chain for tests, swabs, ventilators, and PPE. And this is where they fall flat. Every time I hear Donald Trump say there are more tests and more PPE than ever, I think about my members and how it has been hard to get these things.”

And there’s another thing Weingarten is angry about. After Congress passed the $2 trillion coronavirus rescue package, Education Secretary Betsy Devos warned states not to give funds they receive from this measure to teachers unions. “We try to step up,” Weingarten complains, “and they say we are barring you.”

Weingarten doesn’t yet know if the union will continue to pursue additional PPE for its members. It depends on what its budget will allow. “Trump,” she adds, “has failed to do his job and protect the health and safety of the people who are protecting us….I didn’t know how to be a supply clerk either. But I got on the phone and figured it out, and I’m not the federal government. We are spending money for what employers, states, and the federal government should be paying for.”