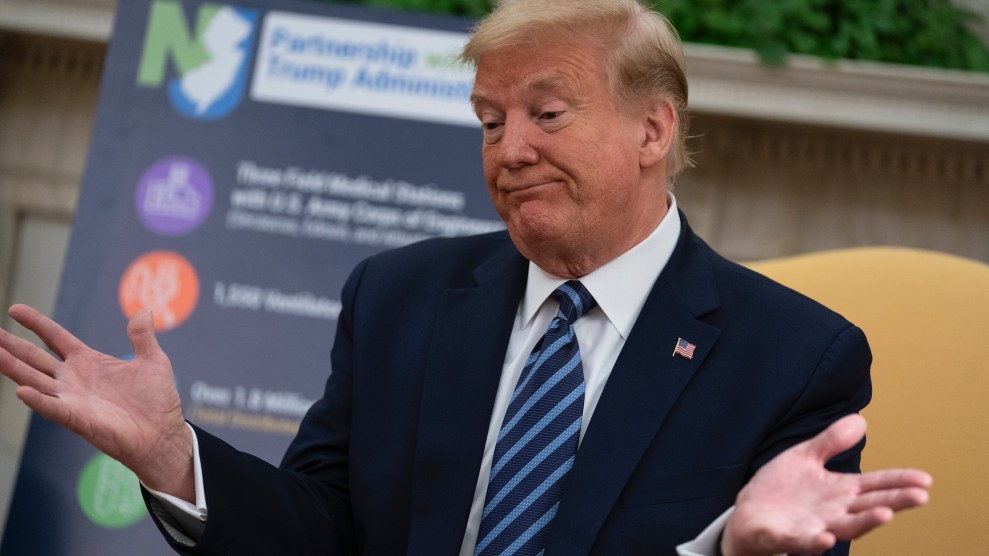 President Donald Trump speaks during a meeting about the coronavirus response with Gov. Phil Murphy, D-N.J., in the Oval Office of the White House, Thursday, April 30, 2020, in Washington. Associated Press

On Saturday morning, President Trump tweeted there would be plenty of coronavirus tests for the US senators set to return to Washington next week. His statements contradict multiple reports that there isn’t enough capacity.

There is tremendous CoronaVirus testing capacity in Washington for the Senators returning to Capital Hill on Monday. Likewise the House, which should return but isn’t because of Crazy Nancy P. The 5 minute Abbott Test will be used. Please inform Dr. Brian P. Monahan. @MarkMeadows

The tweet is a response to multiple reports that Monahan had told top Republican officials he lacked the capacity to proactively test all 100 senators, who are coming to Washington on Monday for the first time since late March. Monahan said his office had enough supplies to test senators and staffers who appear ill—but not the rest. Though Trump said that Monahan could use the “5 minute Abbott Test,” the rapid-results kit used at the White House, Monahan says he doesn’t have the equipment necessary to perform that test. Any tests he conducts won’t have results for two days.

The Capitol’s meager capacity stands in stark contrast to the resources reportedly available at the White House. Both Trump and vice president Mike Pence are tested frequently, as are the aides who work closely with them; tests are also available to anyone who meets with either Trump or Pence.

In his tweet, Trump suggested that the Capitol also had enough tests for the 435 members of the House, “which should return but isn’t because of Crazy [House Speaker] Nancy P[elosi (D-Calif.)],” he wrote. The House had initially been scheduled to return to work on Monday, as well, but a swift bipartisan backlash against traveling as pandemic conditions remain at peak pushed Pelosi to reverse course. Neither the House nor the Senate can vote on legislation remotely.

The country’s limited testing capacity has been the subject of intense criticism. Experts say that widespread testing is necessary to determine a population’s rate of exposure to the virus and whether people can safely resume normal activities. Other countries, such as Singapore and South Korea, have implemented comprehensive testing programs that have allowed them to isolate the sick and reopen their economies.