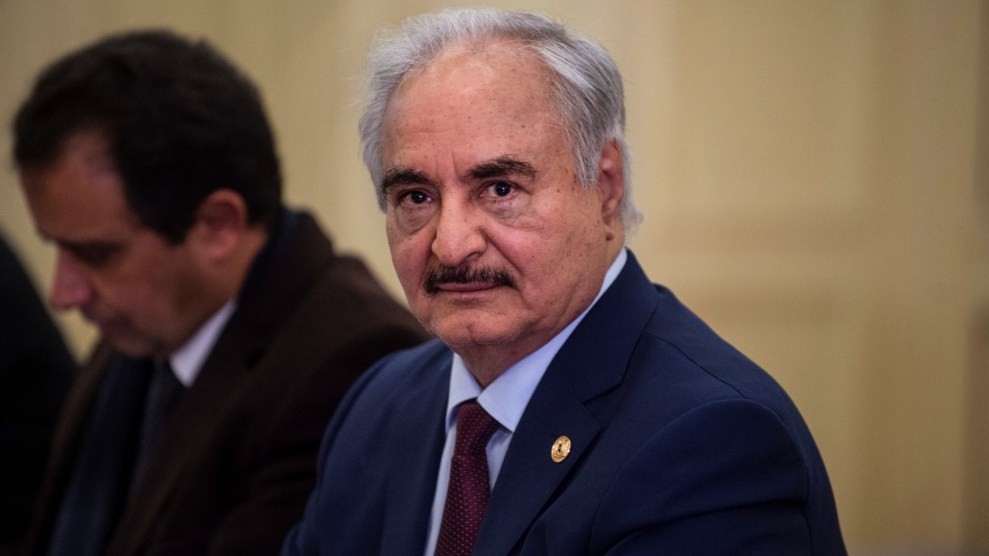 In Libya, where a civil war is raging, the official position of the United States is to support an internationally recognized government in Tripoli and to call for Khalifa Haftar, a warlord and alleged war criminal who controls the eastern part of the country, to lay down arms and negotiate peacefully. President Donald Trump, however, seems to favor Haftar, who has the backing of Russia, the United Arab Emirates, and Egypt.

In a phone call Saturday morning to Turkey’s president, Recep Erdogan, who has provided vital military assistance to the Tripoli government, Trump “reiterated concern over worsening foreign interference in Libya and the need for rapid de-escalation,” according to a White House readout. While this anodyne summary may sound noncontroversial, the lack of any record of Trump delivering similar warnings to two leaders who are arming and supporting Haftar’s forces—Russian President Vladimir Putin and the UAE’s de facto leader, Mohammed bin Zayed—suggests his concern about “foreign interference” in Libya does not apply equally.

In phone calls last year with Haftar, Trump and his then-national security adviser, John Bolton, offered backing for a surprise offensive launched against Tripoli by Haftar’s Libyan National Army. Haftar, a US citizen who previously lived in Northern Virginia as a reputed asset of the CIA, has been accused of overseeing the indiscriminate killing of civilians and the murder of prisoners during his offensive. He won some international backers, though, by highlighting the Tripoli government’s reliance on extremist militias and touting himself as an enemy of terrorism who could stabilize Libya, which has been ravaged by war since the US-led overthrow of Moammar Qaddafi in 2011.

But Haftar’s offensive stalled outside Tripoli last year. And in the last week, Turkey helped fighters aligned with the Tripoli government impose a series of setbacks on Haftar. According to a New York Times account Thursday:

A string of victories by Turkish-backed forces in western Libya this week dealt a heavy blow to the ambitions of the aspiring strongman Khalifa Hifter and signaled the arrival of Turkey as a potentially decisive force among the foreign powers battling for supremacy in the Middle East’s biggest proxy war.

Libyan fighters backed by Turkish firepower captured on Monday a major air base west of Tripoli, the capital, used drones to destroy newly arrived Russian air defense batteries, and on Thursday pressed their offensive by ousting Mr. Hifter’s forces from a key town south of Tripoli.

The triumphs marked a stunning reversal of fortunes for the United Nations-backed Tripoli government, which looked weak and badly besieged by Mr. Hifter until President Recep Tayyip Erdogan of Turkey sent troops and armed drones in January. It was Turkey’s most forceful intervention in the oil-rich North African nation since the end of the Ottoman Empire over a century ago.

“It’s Turkey’s Libya Now,” read the headline on a briefing posted by the European Council on Foreign Relations.

The timing of Trump’s call to Erdogan suggests it was a reaction to these recent battlefield results. Libya is a mess, a failed state ruptured by a deeply complicated proxy war between autocratic leaders. But the president seems to prefer one side.