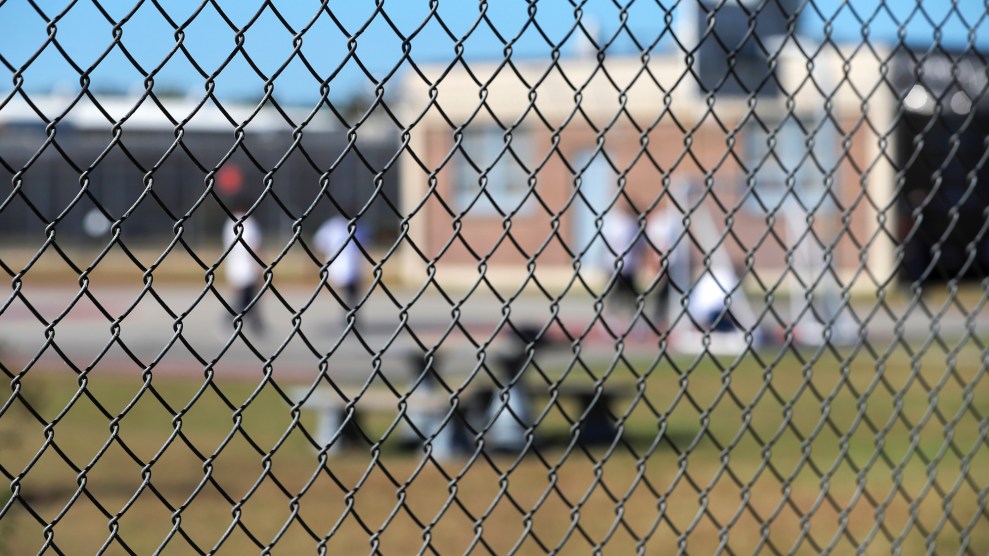 Immigration detainees sit in a yard at the Winn Correctional Center, a for-profit prison in Louisiana run by LaSalle Corrections, in September.Gerald Herbert/AP

A fourth guard at a US immigration detention facility has died as a result of COVID-19, as the virus continues to spread through the close quarters where asylum seekers and other immigrants are being held indefinitely.

On May 1, Lieutenant Lewis Dempsey was sent home from a Louisiana immigration detention center with a fever. On Wednesday morning, he passed away from complications from COVID-19.

Dempsey is the third employee of the private prison company LaSalle Corrections known to have died after contracting the new coronavirus. All three are assumed to have been infected at Immigration and Customs Enforcement detention centers in rural Louisiana where 180 people in detention have now tested positive. The first two both worked at the Richwood Correctional Center. Dempsey worked at the Winn Correctional Center. A fourth guard employed by another private company, CoreCivic, at an ICE detention center in New Jersey died in April.

Dempsey’s death is a reminder that it is not just immigrants whose lives are put at risk by ICE’s decision to keep people in crowded detention centers. Detention center employees, their families, and their communities are also threatened by the outbreaks that experts warned for months were inevitable. As of Wednesday, 115 people detained at Winn have tested positive, 45 of whom are still being monitored for COVID symptoms.

Two people died in ICE custody last month of complications from the new coronavirus. A third man died after being released from a detention center with a massive outbreak without being tested.

LaSalle spokesperson Scott Sutterfield, who previously served as ICE’s top official for Louisiana and four other Southern states, said about Dempsey, “We were saddened to learn today of the passing of our friend and colleague. Our thoughts and deepest sympathies go out to his family, friends and coworkers.” ICE did not immediately respond to a request for comment. The agency does not report when employees of the private prison companies it contracts with test positive or die.

Former Mother Jones reporter Shane Bauer worked as a guard at Winn while it was a Louisiana prison operated by CoreCivic. His award-winning investigation exposed an institution plagued by rampant violence and medical neglect. Last year, I reported that ICE had started sending immigrants and asylum seekers to the facility:

The prison, which is more than four hours from both Houston and New Orleans, is in the “middle of absolute nowhere,” [Marshall Goff, a Mississippi immigration attorney,] says. When he visited for the first time on Saturday, it was clear to him that it was designed to be a prison, not a jail that holds people serving short sentences. It was striking to Goff that immigrants, who are held in a separate area of the prison, “are being housed in the same place as people who commit felonies and who’ve been sentenced for decades.”

The GoFundMe page started by Dempsey’s sister Dochia Doughty states that he was initially unable to get non-emergency medical attention in Winnfield, the town where the detention center is located. He was later rushed to the local hospital, where he nearly died before being airlifted to Shreveport. Dempsey would go on to “code,” a term used when people go into cardiopulmonary arrest, many times there.

His family still hoped that he would survive when they started a GoFundMe page to raise money for his recovery on Tuesday. Doughty wrote about her brother:

Our family is just an ordinary, working-class American family, but we do have extraordinary work ethic.  Lewis was undeservedly struck by an extraordinarily deadly virus.  Yet he survived.  This is a long and on-going story, but what happened to Lewis could happen to any of us.   While he may be an ordinary statistic to some, he is an extraordinary brother to us.  He epitomizes a loving, kind-natured man with a childlike innocence.  I always say he’s a lover, not a fighter.  We place no blame or fault on anyone.

On Wednesday morning, Doughty updated the fundraising page to say that her brother had passed away. “My sister and I were allowed in to love on him beforehand,” she wrote. “He was alert and listening to us. His heart just stopped. He left this world knowing he was loved by so many family and friends.”