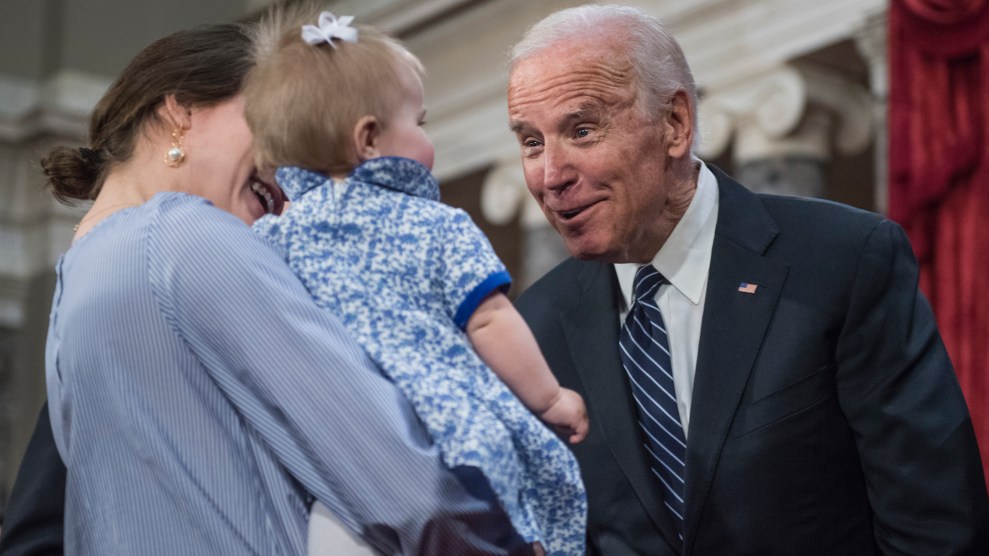 Joe Biden is planning to unveil a comprehensive child care proposal in the coming weeks—part of a broader program to resuscitate the economy that the former vice president previewed earlier this month. The precise details of the new plan are still under wraps, but it will be a part of a “caregiving workforce” initiative intended to tackle home care for the elderly and disabled, paid family leave, and fair wages for caregivers. The plan comes on the heels of a proposal from House and Senate Democratic leaders to create a $50 billion bailout fund for child care providers who, like many other small businesses, have struggled to survive the pandemic and the recession.

For a long time, child care had been a policy backwater among lawmakers in both parties. But over the past few years, a growing consciousness around economic, racial, and gender justice has brought it to the fore. And now—in the midst of a global health crisis and economic meltdown that has exacerbated inequality—Biden’s proposal could give child care policy a moment that advocates have long sought.

“It’s been decades of fighting to make child care similar to the position that health care and higher education hold,” says Mary Kay Henry, the president of the Service Employees International Union.

“What this moment is showing us is that the economy does not work without child care.”

Child care policy hasn’t gained much traction at the federal level since the early 1970s, a time when many women began to challenge traditional gender roles and enter the workplace in larger numbers. In 1971, both chambers of Congress passed a universal child care bill that would have created a network of federally funded care centers with fees based on income. President Richard Nixon had initially shown an openness to the plan, but got cold feet and vetoed the bill because of its “family-weakening” implications.

Nearly 50 years later, Sen. Elizabeth Warren (D-Mass.) used the 1971 legislation as the framework to develop her own child care plan. In early 2019, she proposed that the federal government would partner with local daycare facilities to offer care from birth until children start kindergarten. No family would pay more than 7 percent of its income, and families earning below 200 percent of the federal poverty line would pay nothing at all. Under her plan, 12 million children would get access to formal child care, more than double the number who currently receive it.

The timing, specificity, and ambition of Warren’s proposal set her apart from both her fellow 2020 contenders and pretty much every Democratic presidential candidate in history. In 2016, Hillary Clinton didn’t unveil her child care proposal—which would have capped a family’s expenses at 10 percent of household income—until she’d all but secured the Democratic nomination. Even then, it wasn’t something voters responded to. “When Hillary talked about child care and even paid leave, I don’t think there was the public response to it that you’re used to on a campaign for high-priority issues,” recalls Neera Tanden, the president of the Center for American Progress and a longtime Clinton adviser.

But what made Warren’s proposal truly unique was her framing of child care not just as a family problem, but as a broader economic concern. Child care costs more than in-state tuition at public colleges in many states, and its lack of affordability often forces parents—usually mothers—to choose between entering the workforce and staying home. Meanwhile, the median hourly wage for a child care worker is $10.72, an annual salary that’s less than 40 percent of what elementary school teachers earn. “You can’t say something’s important and pay poverty wages,” Randi Weingarten, the president of the American Federation of Teachers, which represents a number of child care workers, tells me. “We can’t keep pauperizing families and the child care providers.”

The coronavirus pandemic has worsened all of these problems, pushing an already vulnerable and inadequate system to its breaking point. A survey from the National Association for the Education of Young Children found that by mid-April, half of all US child care providers had closed down, and an additional 17 percent were closed to everyone but the children of essential personnel.

In the absence of care, the burden of watching children at home has primarily fallen back onto women. Mothers with a full-time job and a partner are spending 71 hours per week on child care, elder care, and household chores—20 hours per week more than their male counterparts, according to a survey from Lean In, a women’s organization founded by Facebook COO Sheryl Sandberg. Women of color are spending an even greater amount of time on domestic work.

Most child care centers, unlike schools, are privately owned small businesses and nonprofits for whom shutting down has been financially devastating. While many applied for the emergency loans Congress made available, few have actually received the help. And as states and local economies reopen, pressure is mounting on child care providers to do the same—even as many struggle to purchase the necessary protective equipment and cleaning supplies to keep children and employees safe. These risks will be distributed unequally: Most child care workers are women of color, and many live and work in communities that have been particularly vulnerable to COVID-19.

The crisis has given momentum to calls for change. “As a society, we’ve devalued this work, and that is why it has not been a priority,” says Julie Kashen, the senior policy director of the National Domestic Workers Alliance. “What this moment is showing us is that the economy does not work without child care.”

Economic research backs up that argument. A 2018 CAP study estimated that US gross domestic product would rise by $210.2 billion if the country adopted a universal child care plan with costs capped at 10 percent of families’ incomes. Labor unions, women’s advocacy organizations, and racial justice activists have all lent their voices to the cause. “More organizations with political power have recognized how child care is an economic issue, a women’s issue, and an inequality issue,” Tanden says. “That has made this a much more central concern.”

Until now, Biden had only proposed universal preschool for three- and four-year-olds, but the campaign has been thinking about a broader child care proposal since the former vice president entered the race, according to a source familiar with its efforts. Tanden, Henry, and Weingarten, all of whom either advise or are in regular contact with the campaign, refused to comment or give specifics on the plans. Weingarten, who serves on an education policy task force created by Biden and Bernie Sanders, says the group devoted a recent meeting to early childhood care and had “a really good conversation,” but she did not offer further details. The Biden campaign declined to comment but confirmed that child care would be a piece of the candidate’s caregiving agenda.

A number of advocates and activists say they had heard Biden initially planned to roll out a universal child care proposal—one that approached the level of ambition put forth by Warren—in March, around the time he adopted other progressive proposals pushed by his primary opponents, including Warren’s bankruptcy reform plan and modest elements of Sanders’ and Warren’s student debt cancellation plans. But that was before the coronavirus crisis hit and turned the industry’s long-term problems into a present-day catastrophe.

The interceding time has given Biden a chance to reframe what might otherwise have been seen as a pie-in-the-sky liberal wish-list item. In recent statements, he’s linked the urgent need for better child care infrastructure to both the immediate crises the country faces and the systemic inequality the current system is founded upon. “Think of the millions of people out there, particularly women who are home taking care of daughters, taking care of their elderly parents, people who are there taking care of the young and the elderly with special needs,” Biden told attendees at a virtual fundraiser Tuesday night. “We can make sure that we have a civilian force that is able to take care of those people and get paid to do it.” On Thursday, his campaign pledged that, under a Biden administration, federal funds would be allocated to help child care centers cover the cost of making their facilities safe for children, families, and workers during the pandemic.

A candidate’s platform is just a value statement, and should Biden assume the White House, the moonshots in his economic plan might amount to little more than that. But just as the times—and an army of activists—have pushed Democrats to embrace the issue, so too have Republicans. Sens. Kelly Loeffler (R-Ga.) and Joni Ernst (R-Iowa), both of whom face tough reelection fights this fall, introduced their own $25 billion bailout of the child care industry last month. Biden won’t find willing partners across the aisle for most of his priorities, but child care might be the exception to that rule.