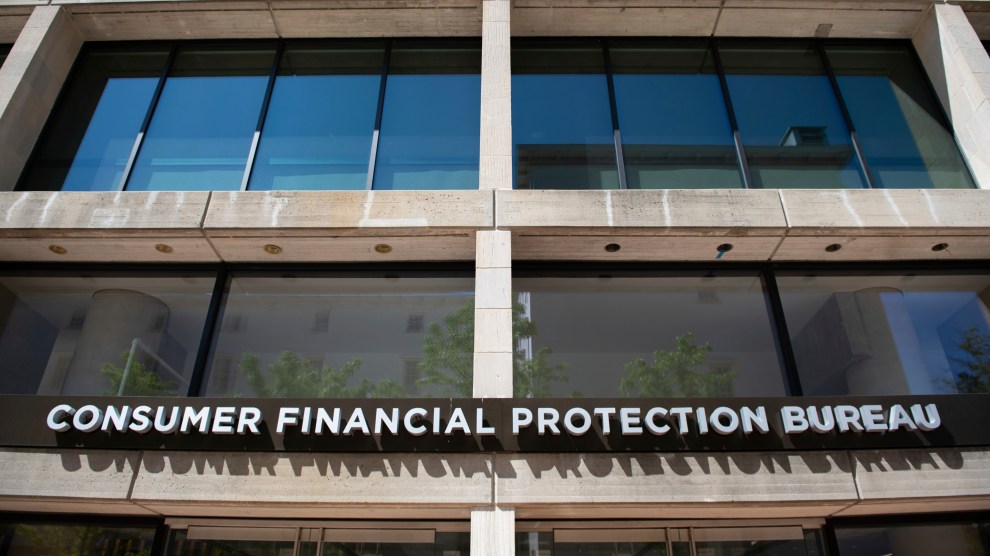 In October 2019, the Consumer Financial Protection Bureau—tasked with enforcing federal regulations on financial institutions—announced the creation of a new task force to conduct an “objective and independent evaluation” of current financial regulations. On Tuesday, the watchdog group Democracy Forward filed a lawsuit against the CFPB, alleging that the bureau has intentionally stacked the task force with supporters of Wall Street deregulation.

The lawsuit—filed on behalf of the National Association of Consumer Advocates, US Public Interest Research Group, and a consumer finance professor who applied for a position on the task force and was rejected—alleges that the skewed membership is a violation of a federal law designed to prevent special interest groups from swaying federal agencies by way of advisory boards.

During the Trump administration, consumer watchdogs say, the agency has been focused more on deregulating financial institutions than on keeping them in check. President Trump’s first appointee to run the CFPB, Mick Mulvaney, is a longtime foe of the agency. While in charge, he shelved investigations, weakened regulation of payday lenders, and dismissed advisory boards stacked with consumer finance experts. Since Kathy Kraninger took over in 2018, the bureau has moved away from enforcement actions and instead prioritized supervision and prevention—a shift that critics worry will keep companies’ bad behavior from coming to light.

Within three months of announcing the task force’s creation, the CFPB settled on its five members. The chairman it appointed, lawyer Todd Zywicki, often criticized the CFPB under President Obama, called it a “train wreck,” and defended a company under investigation by the agency for an illegal debt relief scam. Other members include a former Federal Reserve economist who has written articles calling for the rollback of financial regulations, a lawyer for several payday lenders sued or investigated by the CFPB, and a business professor who in expert testimony had argued that payday loans with high interest rates are beneficial to consumers.

The task force membership earned criticism from Sen. Elizabeth Warren (D-Mass.)—who proposed and helped build the CFPB after the 2008 financial crisis—and her Senate colleague Sherrod Brown (D-Ohio). The pair sent a letter to the Kraninger in February, expressing “significant concerns” over the makeup of the task force and calling on her to suspend the task force and to answer a detailed list of questions about how it was constructed.

“The members you selected make clear that the Taskforce is just a pretext to gut regulations and protections for consumers,” the senators wrote. “The pro-industry, deregulatory makeup of the Taskforce is no accident.”

They also wrote that they’d heard of at least five consumer finance experts who had applied for membership on the task force and been rejected. They asked whether the task force was subject to the Federal Advisory Commission Act (FACA), which requires that federal advisory boards include a fair balance of views.

The Democracy Forward lawsuit picks up where Warren and Brown left off. The lawsuit alleges that the CFPB’s actions in forming the task force are a violation of FACA.

According to the suit, Kathleen Engel, a mortgage finance expert and law professor at Suffolk University, interviewed to join the task force after submitting an application through the CFPB’s open process. She had previously sat on the CFPB’s Consumer Advisory Board, a group of prominent consumer finance experts that Mulvaney dismissed in 2018. In her interview with a political appointee, the suit states, she was asked questions aimed at determining her stance on deregulation, instead of questions about her qualifications.

“The Federal Consumer Financial Law Taskforce is the latest effort by a Trump appointee to outsource policymaking to private interests while excluding other voices,” said Democracy Forward Executive Director Anne Harkavy in an emailed statement. “In the midst of an economic downturn, the CFPB should not be excluding consumer advocates from key policymaking conversations about how to protect American families.”