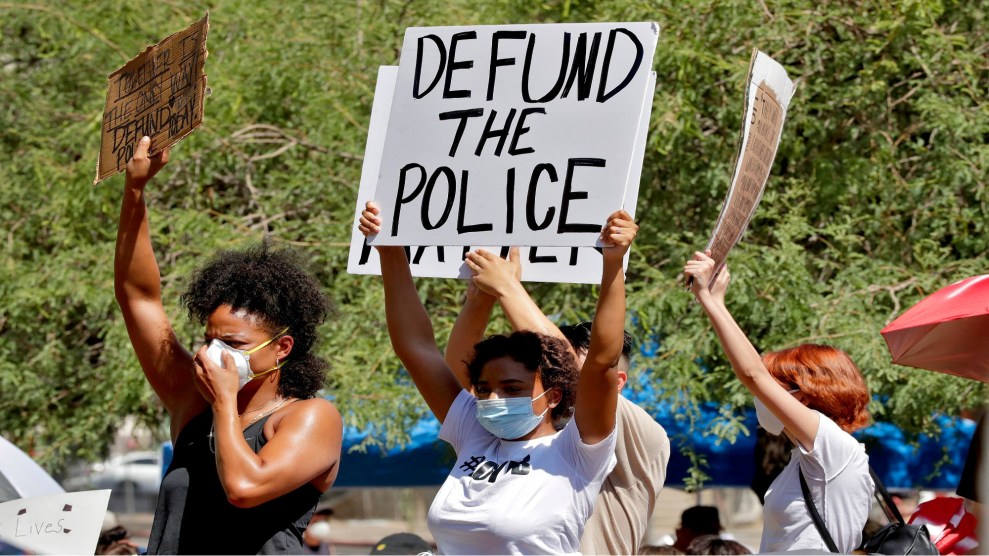 In Nashville, Tennessee, on Tuesday, resident after masked resident lined up outside a public hearing on the city’s budget. They waited, in some cases for hours, for their turn to share the same message with the City Council: It was time to defund the police. The hearing began at 6:30 p.m. and didn’t conclude until nearly 5 a.m. the following day.

Nashville is far from alone. As twin crises consume cities across the country—protests against police brutality and a pandemic that has battered the economy and wiped out municipal revenues—many social justice advocates say there’s an obvious response: cut funding to police departments and reinvest the money in other urgently needed public services.

This idea is not new but is gaining unprecedented momentum around the country as police violence against Black people has become the focus of nationwide protests following the May 25 killing of George Floyd by a Minneapolis police officer.

“We need to shift resources out of these harmful punitive systems that we spend incredible amounts of money on—namely, police at the local level—and shift that to the types of resources that will actually allow communities to be safe and to thrive,” says Kumar Rao, director of the Justice Transformation program at the Center for Popular Democracy, a progressive advocacy group.

With an eye toward this type of redistribution of police funds, activist groups and lawmakers across the county have taken aim at local budgets. In many municipalities, the fiscal year ends on June 30, meaning that next year’s budgets are being finalized this month and will take effect in July.

In Minneapolis, groups such as Reclaim the Block and Black Visions Collective are urging the city to cut the police department’s budget by $45 million. “Our city is on fire, our people are hurting, and Black communities are crying out for health and safety in the midst of pandemic,” notes a petition from Reclaim the Block. “Now is the time to invest in a safe, liberated future for our city. We can’t afford to keep funding MPD’s attacks on Black lives.”

In New York City, lawmakers and policing reform advocates have called on Mayor Bill de Blasio to slash millions in police funding as the state budget faces what one official called “economic devastation not seen since the Great Depression.” In Los Angeles, four City Council members have introduced a proposal to reverse the mayor’s planned 7 percent police funding increase. In Durham, North Carolina, protesters gathered at a local theater this week for a “Defund the Police” protest. In Milwaukee, Wisconsin, the African American Roundtable—backed by more than 65 organizations—called on the city to divest $75 million from the police department and to reinvest $50 million into public health, with the rest going to housing cooperatives. In Philadelphia, where the mayor has proposed a $14 million increase in police funds, activists have been signing up in droves to testify virtually at a city budget hearing next week in protest.

Celebrities have also joined in the chorus of voices calling to reallocate police budgets. An open letter reportedly signed by Lizzo and John Legend, among other notables, highlighted the disproportionate rate of COVID-19 deaths in the Black population in its call to defund the police and invest in health care instead.

“The COVID-19 deaths and the deaths caused by police terror are connected and consequential to each other,” the letter states. “The United States does not have a national healthcare system. Instead, we have the largest military budget in the world, and some of the most well-funded and militarized police departments in the world, too.”

Racial justice and police reform advocates, including the Movement 4 Black Lives, have for years called for “invest/divest” campaigns aimed at pulling money from police budgets and reinvesting it in community initiatives that stand to improve daily life and safety, from housing to infrastructure, and from health care to education. Advocates note that these sorts of public investments are themselves tools for reducing crime—an idea supported by many studies.

“We spend too much on an institution that fails to advance and often undermines safety and security in the community. And we spend too little on structures that actually cultivate community safety and economic success,” says Rao.

Rao co-authored a 2017 CPD report that examined police funding in 12 jurisdictions across the country. Oakland spent 21.1 percent of its total operating budget on police—more than housing, parks, workforce development, and human services combined; Floyd’s adopted hometown of Minneapolis spent more than 11 percent of its budget on policing—1.5 percent went to the health department.

These sorts of budgeting imbalances could get worse in light of the economic crisis wrought by COVID-19. Following huge losses of tax revenue due to coronavirus shutdowns, cities and states are facing multibillion-dollar deficits. (Analysts estimate a shortfall of anywhere between $500 billion and $899 billion.)

Some proposals to reinvest police funds are making legislative headway. In New York City, where a $9 billion budget deficit is projected for fiscal year 2021, the City Council’s 21-member progressive caucus has set a meeting with criminal justice reform advocates to discuss their police funding proposals, after several months of advocacy for large cuts; a coalition of dozens of criminal justice reform advocates sent a letter in April to Mayor de Blasio and City Council Speaker Corey Johnson, urging them to make “significant reductions to the NYPD’s bloated budget.” In 2019, the letter noted, the city allocated $6 billion to the NYPD, more than “on health, homeless services, youth development, and workforce development combined.”

In their own letter to de Blasio last week, Johnson and two other City Council members noted that the cuts the mayor’s office has proposed so far are skewed in favor of the police; they include a proposed 32 percent cut to the Department of Youth and Community Development compared to a 0.4 percent reduction ($23.8 million) to the NYPD budget.

A coalition of 48 candidates for New York City office this week called on the City Council to reduce the NYPD’s budget by $1 billion over the next four years, institute a temporary police hiring freeze, and halve the department’s $800 million in annual overtime spending. Their proposal echoed the $1 billion in NYPD cuts suggested by the Policing and Social Justice Project at Brooklyn College, which also calls for reducing funds for body cameras and a New York City surveillance program run by the NYPD.

Council Member Ben Kallos, the progressive caucus’s co-chair, told the New York Post that many members of the group “have already come out in favor of #Defund NYPD and we will be taking a formal position as a caucus shortly,”

In Los Angeles, proponents of police funding cuts won a tangible victory. On Wednesday, city council president Nury Martinez and three of her colleagues released a proposal to cut between $100 to $150 million from the LAPD’s budget and allocate those funds to communities of color. Their proposal came after a coalition of community groups, led by Black Lives Matter–Los Angeles, launched a “People’s Budget” campaign focused on slashing and reallocating much of next year’s LAPD budget, in the face of proposals by the city’s mayor to increase it by $120 million.

These calls for funding reductions made an impression. Hours after council members released their proposal to slash LAPD funding, Los Angeles Mayor Eric Garcetti called a press conference, where he announced the city would drop its plans to increase the police budget. Instead, he said he would cut $250 million from the budget overall, redirecting those funds to public health, youth development, damages for those who’ve suffered discrimination, and “peace centers” to heal trauma. At least $100 million of the cuts to fund these efforts are expected to come from the police budget.