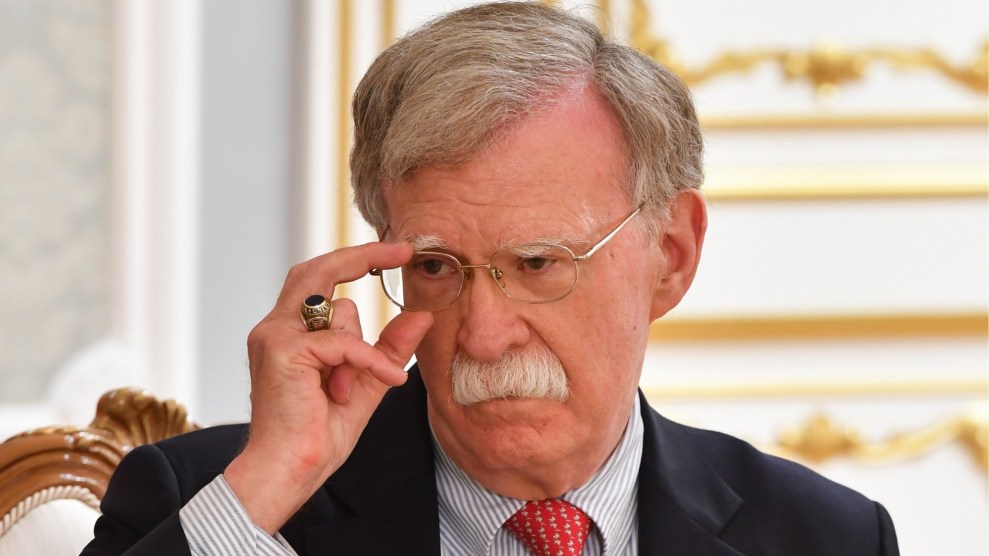 Last October, President Donald Trump said, on television, that “China should start an investigation into the Bidens” and reiterated his previously private push for Ukraine to investigate the former vice president and his son Hunter. That may have seemed to many people like a public confession to the misconduct that would lead to Trump’s impeachment: soliciting foreign interference in the 2020 election. Some of Trump’s defenders, however, said that Trump wasn’t seriously asking China for election help, or something like that.

Bolton is indeed a kind of whistleblower. But he might be the least courageous one in American history.

That, it turns out, could have been John Bolton’s moment. Bolton—who, a month earlier, either quit or was fired as Trump’s national security adviser, depending on who you believe—was invited on October 30 to give a deposition as part of the House’s impeachment inquiry. He refused. (Bolton later offered to testify as part of the Senate’s impeachment trial if subpoenaed, but only after it was fairly evident that Senate Republicans would refuse to call any witnesses. Some damning details from his book leaked during the trial.)

On Wednesday, Bolton, who is hawking a memoir about his time in “The Room Where it Happened,” told the world that he knows something about Trump’s efforts to seek assistance from the Chinese government for his reelection campaign. According to reports in the New York Times and the Washington Post, Bolton writes that in a June 29, 2019, meeting, Trump pleaded with Chinese President Xi Jinping to help Trump’s electoral prospects by purchasing US agricultural products—and thus improving Trump’s standing in rural states hurt by his trade war with China. The newspapers obtained Bolton’s book a day after the Justice Department sued Bolton to try to block its publication. The administration asserts the book reveals classified information, a claim that Bolton disputes.

Bolton also shared this information in an excerpt published by the Wall Street Journal:

In their meeting in Osaka on June 29, Xi told Trump that the U.S.-China relationship was the most important in the world. He said that some (unnamed) American political figures were making erroneous judgments by calling for a new cold war with China.

Whether Xi meant to finger the Democrats or some of us sitting on the U.S. side of the table, I don’t know, but Trump immediately assumed that Xi meant the Democrats. Trump said approvingly that there was great hostility to China among the Democrats. Trump then, stunningly, turned the conversation to the coming U.S. presidential election, alluding to China’s economic capability and pleading with Xi to ensure he’d win. He stressed the importance of farmers and increased Chinese purchases of soybeans and wheat in the electoral outcome.

Bolton added that he “would print Trump’s exact words, but the government’s prepublication review process has decided otherwise.”

Bolton also writes that Trump told Xi that China’s decision to detain Uighur Muslims in concentration camps was, in Bolton’s paraphrasing, “exactly the right thing to do.” Trump, according to Bolton, encouraged the Chinese leader “go ahead with building the camps.”

That’s not all. Bolton’s book alleges that Trump expressed a willingness to stop US criminal investigations “to, in effect, give personal favors to dictators he liked,” according to the Times. “The pattern looked like obstruction of justice as a way of life, which we couldn’t accept,” Bolton writes.

Bolton says Trump told Xi he would intervene with the Justice Department to help Chinese telecommunications firm ZTE, which agreed in 2017 to plead guilty to violating American sanctions on doing business with North Korea, Iran, and other countries. Bolton says Trump told Turkish President Recep Tayyip Erdogan in May 2018 that he would intervene to block the DOJ’s prosecution of a Turkish state-owned bank, which was accused of violating US sanctions on Iran. Trump “told Erdogan he would take care of things, explaining that the Southern District [of New York] prosecutors were not his people, but were Obama people, a problem that would be fixed when they were replaced by his people,” Bolton writes, according to the Post. CNN has reported that Attorney General William Barr, under pressure from Trump, did try to stave off Halkbank’s indictment by federal prosecutors in Manhattan.

My only request for coverage of John Bolton’s book is for news outlets to use this GIF of him in their stories. pic.twitter.com/BSUVVS7Jvq

Bolton apparently feels that the House, rather than impeaching Trump merely for pressuring Ukraine, should have investigated the president over the various other instances in which he meddled with law enforcement or sought electoral assistance from foreign powers. In this, Bolton shares the view of many liberal critics who believed the House should have impeached Trump for a broader swath of crimes and misconduct.

The House Intelligence Committee could still subpoena Bolton. So could other House committees, such as Judiciary, given his claims about DOJ investigations. Spokespersons for those panels declined to comment on whether they might do so. But it appears likely that Bolton missed his chance to tell lawmakers under oath why they should remove the president from office.

Bolton is trying to publish a book, prior to Election Day, that details why Trump is a bad president. That earns him support from Trump’s critics. Bolton is indeed a kind of whistleblower. But he might be the least courageous one in American history. The Times calls him a “complicated, controversial figure.” Not really. He’s a jerk promoting himself—one who waited far too long to tell the truth.

Last fall, patriotic civil servants—including former Bolton subordinates Fiona Hill and Alexander Vindman and former US ambassadors to Ukraine Marie Yovanovitch and William Taylor—risked their careers and endured slander to testify truthfully about Trump’s efforts to corrupt US foreign policy. The witnesses appeared in the House Ways and Means hearing room. That was “the room where it happened.” Bolton didn’t show up.