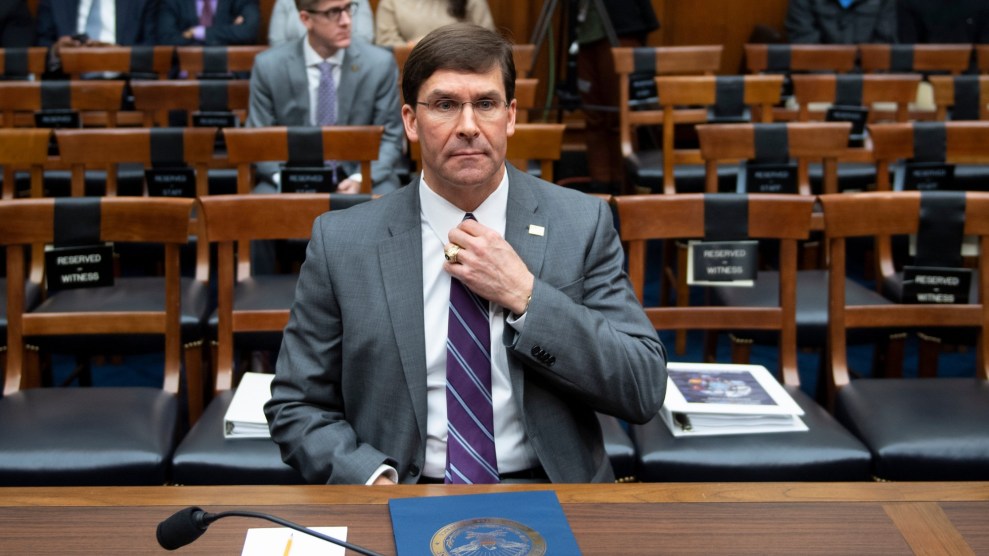 For anyone hoping to rein in the military’s excesses, this year of unrelenting crisis and outrage should have presented a rare opportunity. In lieu of the usual business of forking over billions to the Defense Department for needless submarines or nuclear weapons, Congress had a chance to craft a spending bill that reckons with the ongoing (and future) threat of pandemics, climate change, and global migration.

Instead, the Republican-controlled Senate just doubled down on the type of spending lawmakers from both parties love best. In its markup of the annual defense policy bill, the Senate Armed Services Committee approved a $740.5 billion proposal that includes the purchase of 95 stealth fighter jets, 14 more than the Trump administration requested, to the tune of $9.1 billion. To support the Navy’s quixotic goal of assembling 355 battle-ready ships, the Senate committee approved $21.3 billion toward shipbuilding, nearly $1.5 billion more than the Department of Defense requested. The Pentagon has never been shy about asking for money, but in a year where the coronavirus has reset priorities across the federal government and Republicans in Congress have been hesitant to fund more stimulus to help people suffering during the massive job losses following the pandemic, it’s unusual, even baffling, to see the same old issues reign supreme for lawmakers when it comes to defense spending.

Since 2000, the defense budget has more than doubled and, despite a series of budget caps during the Obama administration that limited overall spending, lawmakers have maintained an annual commitment to defense that exceeds what the next seven countries combined pay. A bipartisan budget deal crafted last year to stave off another government shutdown has ensured defense spending will increase by $24 billion within two years.

The Senate committee’s bill is still only one small piece of the puzzle when it comes to finalizing next year’s defense policy bill, which is formally known as the National Defense Authorization Act. Other senators might be able to amend the bill once it comes for a vote on the Senate floor, though, as I reported earlier this month, Majority Leader Mitch McConnell (R-Ky.), is not expected to permit any controversial votes. The House, which is controlled by Democrats, will also pass a more liberal, if not necessarily progressive, bill that must be squared with the Senate’s version before reaching Donald Trump’s desk. The problem for progressives, who have already renewed an annual fight to cut overall defense spending, is that lining the Pentagon’s coffers has never been a traditional left-right issue. Only two senators voted against the committee’s bill last week; twenty-five others supported it.

Last year, the progressive flank of the new Democratic majority in the House fought to lower overall defense spending and inserted several policy provisions into the draft bill, including limits on Trump’s war powers and a reversal of his administration’s transgender military ban, but none of those wishlist items made the final law. The resulting legislation was so favorable to Republicans that Sen. James Inhofe (R-Okla.), chair of the Armed Services Committee, flouted a list of rejected Democratic proposals with the title, “Progressive Agenda Halted,” at a GOP caucus lunch in December.

Democrats were able to secure a few significant victories in the Senate bill this year. The Republican-controlled committee voted to require the Pentagon to rename military bases that were named for Confederate generals, a break with Trump, who vowed on Twitter to never “consider” changing the names of these “Magnificent and Fabled Military Installations.” A widely-criticized lobbying provision, which would have made it easier for ex-Pentagon officials to secure lucrative jobs in the defense industry, was struck from the bill. The overall defense spending figure, which encompasses the Pentagon and related agencies, was $740.5 billion, nearly $10 billion fewer than what Inhofe’s committee approved last year, but still in line with what the Pentagon requested and what congressional leaders agreed to in last year’s budget deal.

William Hartung, director of the Arms and Security program at the Center for International Policy, told me the committee approving “$740 billion is politically and strategically tone deaf,” given that the major national security challenges facing the United States are not military in nature, but fueled by climate change, pandemics, and rampant inequality due to race and income. “None of these challenges will be solved by spending more on the Pentagon,” he said.

Since the coronavirus pandemic started, lawmakers have given the Pentagon more than $10 billion as part of the CARES Act, which the department has only just begun to spend. According to spending plans provided to Congress, the Pentagon intends to use the bulk of its emergency funding on programs with only the thinnest connection to the virus, including hundreds of millions for hypersonic missiles, body armor, and shipbuilders. More coronavirus relief money will almost certainly be on its way. Ellen Lord, the Pentagon’s acquisition chief, told lawmakers earlier this month that the department still needed “billions” to cover defense companies hurt by the virus, and Rep. Adam Smith (D-Wash.), chair of the House Armed Services panel, is reportedly planning to include a $1 billion pandemic preparation plan in his committee’s own markup of the NDAA, Defense News reported last week, which would boost production of medical equipment needed as part of the response to the pandemic.

But during such a unique period of crisis, Congress still seems unable to reckon with changing landscape of defense priorities. The F-35 fighter jet program, easily the most expensive and troubled weapons program in history, received another endorsement from legislators when Inhofe’s panel authorized the Pentagon to produce 14 more jets than the department requested. Lockheed Martin, the program’s key contractor, has already halted production of the jets and expects delivery to slow in future months. “One thing our experience with COVID-19 has shown us is that nothing will get in the way of business as usual in the military industrial congressional complex,” Dan Grazier, who has discovered systemic flaws in the F-35 program as a fellow at the Project on Government Oversight, told me. “Authorizing more weapons beyond the Pentagon’s request is what members of Congress do. They want to make sure tax dollars flow into their districts so they can show they did their part to shore up the industrial base and please their constituents.” Not even a pandemic can stop that.