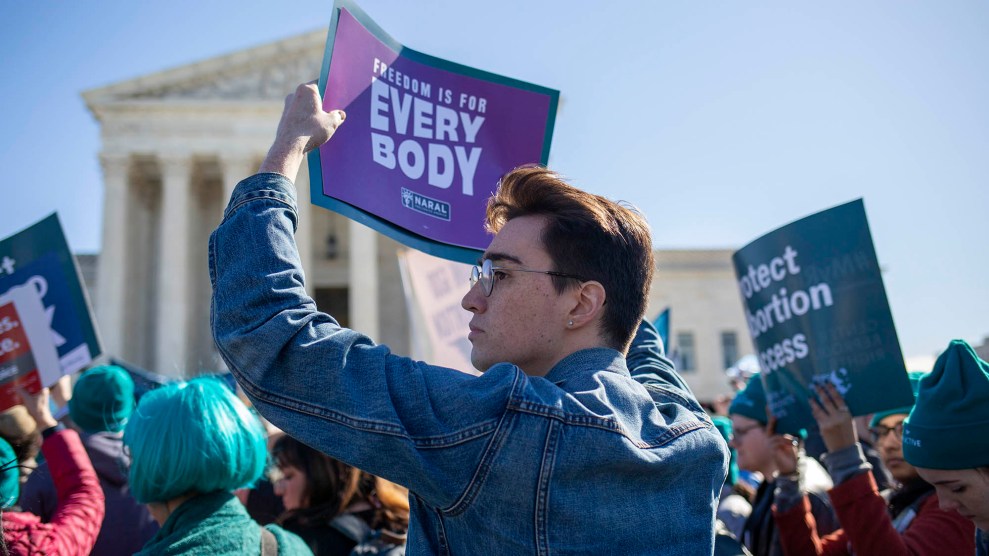 The Supreme Court decision today to protect abortion rights is undoubtedly a win for reproductive rights advocates. But by no means should it be a signal for them to rest easy; Chief Justice John Roberts, who joined the liberal wing in the 5-4 decision, pointedly left the door ajar for future challenges over the right to abortion in the United States.

The key takeaway from today is that Roberts didn’t rule on the merits of a constitutionally protected right to abortion—rather he deferred to the power of the court itself. “If you read Roberts’ concurrence, it means that we have a new swing justice on abortion, which is significant, and that new swing justice cares a lot about precedent or at least the appearance of respect for precedent,” explains Mary Ziegler, a professor at the Florida State University College of Law and the author of Abortion and the Law in America. “But Roberts was pretty clear that he still is very skeptical about abortion rights.”

“That new swing justice cares a lot about precedent or at least the appearance of respect for precedent.”

This means that the status quo was preserved today; nothing about the new ruling means the legal right to an abortion is safer today than it was yesterday. “It’s critical for people to continue to be vigilant about access to abortion, the vote was just five to four, even for this case that was identical to the Texas case,” says Julie Rikkelman, who argued at the Supreme Court in the spring against the Louisiana law at the heart of June Medical. “And we know the opposition is relentless, so we’re going to have to continue to fight, law by law and state by state.”

It was always likely to come down to Roberts. Abortion rights advocates and abortion practitioners had been preparing for the worst-case scenario in June Medical Services v. Russo since the Supreme Court flipped to a conservative majority. But the complicating factor for anti-abortion justices was that the case was a near carbon copy of the Whole Woman’s Health v. Hellerstedt Supreme Court case from 2016. June Medical dealt with a TRAP law that required abortion providers to have admitting privileges at a nearby hospital, which is precisely the same regulation that the court took up—and ruled against—six years ago in Whole Woman’s Health. (In theory, while this sort of regulation sounds reasonable, in practice, it has served as a way of whittling down eligible abortion providers despite the low-risk nature of the procedure, especially in states where religious hospital affiliations have flourished.) The only differences were that this time, the litigation involved Louisiana, not Texas, and, of course, that the dynamics of the bench shifted when Brett Kavanaugh took over Anthony Kennedy’s seat in 2018.

Back in May, Ziegler told me, “For Roberts, I think the case is probably a lot about what you mean when you talk about precedent—when you respect precedent, what constitutes a precedent…. I think the question of what we even mean by ‘precedent’ is probably going to be one of the questions at the heart of the case.” So in the end, Roberts decided to make the safest play possible. Yes, he sided with liberals in striking down the abortion restriction—but he didn’t exactly abandon the conservatives. He explicitly notes his concern with precedent. Roberts’ opinion, in fact, makes it quite clear that he remains anti-abortion; he ruled against Whole Woman’s Health in 2016, and he specifies that his stance has not changed: “I joined the dissent in Whole Woman’s Health and continue to believe that the case was wrongly decided. The question today however is not whether Whole Woman’s Health was right or wrong, but whether to adhere to it in deciding the present case.”

Yes, Roberts sided with liberals in striking down the abortion restriction—but he didn’t exactly abandon the conservatives.

Ziegler adds that it shows that “if you want [Roberts] to go along with something, you can’t ask him to look as if he doesn’t care about the law or about precedent—you can’t ask him not to save face.”

It’s also worth noting that the precedent established in Whole Woman’s Health isn’t the only one Roberts is paying careful attention to. “One line that really caught my attention,” Ziegler explains. “He said that the Casey court only struck down one abortion restriction; in his view, that’s the undue burden test. The undue burden test is a test that lets legislators do most of what they want”—in other words, it’s an ill-defined, subjective provision that unleashed a rat race in conservative legislatures to see who could get the closest to the line of creating an “undue burden” on women seeking abortions, without courting an expensive lawsuit that would ultimately kill the law in question. Even so, it follows that attempts to pass all-out bans on abortion—like the so-called heartbeat bans that make abortion illegal before many women even realize they’re pregnant—would clearly be unable to withstand such a test.

Today’s outcome—and Roberts’ posturing—means we should expect the backlash to be strong. The Whole Woman’s Health decision arguably energized the conservative voting base that elected Trump later that year; it’s hard to imagine this won’t yield a similar effect in this year’s election. Inevitably, abortion foes will wonder what would happen when another anti-abortion law makes it to the Supreme Court—one that doesn’t question the judgment and tradition of the very institution on which the justices serve. And it doesn’t even have to be one that explicitly overturns Roe to do the work they want it to. Anti-abortion legislators at the state level aren’t really falling short in finding new and creative ways to limit abortion access. Tennessee, after all, made headlines recently for passing draconian anti-abortion legislation in the dead of night that is known colloquially as a “heartbeat ban.” But what’s so insidious about this law is that it has a “ladder” provision that adds two weeks of gestation time to the ban each time the law is struck down by the courts. So, for instance, if a court strikes down the law as it stands now, banning abortion after six weeks, it will then revert to being a law that bans abortion after eight weeks, then 10, 12, 15, 18, 20, 21, 22, 23, and 24 weeks of gestation.

“This [legislative attack] is what the opposition is doing,” says Oriaku Njoku, co-founder and executive director of Access Reproductive Care-Southeast. “Of course, they’re waiting for a case to come through to the Supreme Court—it’s one of those like, ‘throw the spaghetti on the wall and see what sticks’ situations. And in the meantime, they’re causing an immense amount of harm and perpetuating ideas and narratives of shame and stigma and fear when it comes to abortion in this country.”

“We still have work to do, because we should not be here in another two to four years,” she concludes.

The Whole Woman’s Health decision arguably energized the conservative voting base that elected Trump later that year; it’s hard to imagine this won’t yield a similar effect in this year’s election.

Case in point: ARC-Southeast is based in Georgia, where a federal judge recently heard oral arguments on HB 481, the state’s six-week ban that passed in 2019 but has been suspended in the courts ever since. The judge said just two weeks ago that he would wait to rule on this case until after the Supreme Court issued its opinion in June Medical. Given that the June Medical decision cites the Casey court and the standard of “undue burden,” it’s pretty unlikely that the Georgia ban will survive the federal court challenge. That too should be a relief for women. But it still drives home the fact that the very content and detail of these judicial decisions matters immensely.

Either way, I think it’s fair to say we can expect more bans, constitutionality be damned.