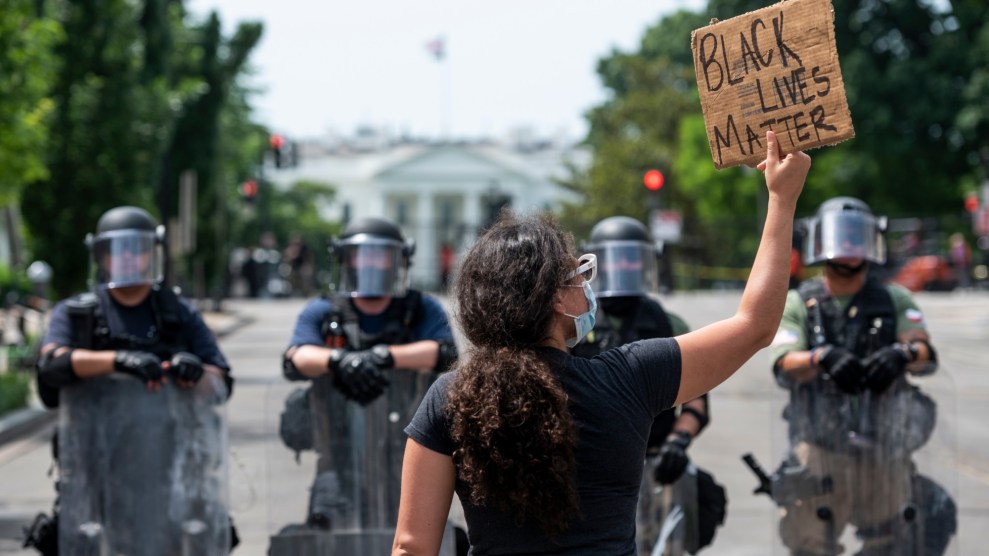 A protester in front of federal security forces on 16th St NW in front of the White House on June 3, 2020.Bill Clark/CQ Roll Call via AP Images

On Tuesday, while walking alongside hundreds of protesters giving the finger to the Trump International Hotel as they marched toward Congress, I spotted armed men in quasi-military gear standing on the other side of Pennsylvania Avenue in front of the FBI’s headquarters.

I approached, noticing they had no obvious insignias, unlike the DC Police and some of the other law enforcement out tracking protesters and guarding DC buildings this week.

I asked two men who they were with. “We’re with the Department of Justice,” one answered. “Are you with a specific agency?” I asked. “Are you regular DOJ employees or just detailed there?” He responded: “We’re with the Department of Justice” to all my questions. He asked me who I was with, which I was happy to share, and why I wanted to know, which I’d hoped was obvious. This is America. We are supposed to know who’s policing us.

These guys said they’re with “the federal government.” pic.twitter.com/qOWdj23zJw

But things are changing. The Trump administration, in the name of order, is claiming the power to use unidentified federal law enforcement personnel to police protests. On top of the dizzying array of federal law enforcement already out in force this week, these are some of the “federal assets” that Donald Trump said he was deploying in DC in the wake of large protests and substantial looting and property damage on Sunday night. These officers, if that’s what they are, have not only declined to identify themselves, but appear to be actively taking steps to hide their affiliation.

As the march Tuesday continued east, I saw dozens more men dressed similarly—green fatigues, black undershirts, helmets, shoes not boots, and no masks. A group of them were spread out around the Navy Memorial between 8th and 9th St. on Pennsylvania. One told me he was with the “federal government.” He said, a little apologetically, that this was all he was allowed to say.

Another said that he and his colleagues were “Justice Department assets.” When I asked if they always wore those uniforms, he said no: “We put on what they tell us to.”

Later, Justice Department spokesperson Kerri Kupec, in response to my inquiry, said in an email that these personnel were from “BOP,” or the Bureau of Prisons. NPR, citing a “senior Justice Department official,” reported Monday that Attorney General Bill Barr “directed the Federal Bureau of Prisons to dispatch riot teams” to Miami and DC to help local authorities respond to protests. Kupec didn’t answer additional questions, including whether these security forces have been specifically instructed to hide their affiliation.

But it seems that amid curfews and a stay-at-home order, DC residents are being confronted by people normally used to guard federal prisoners, under a Congress we have no say in electing.

Back outside the White House. Today the perimeter has been pushed back another half block. Federal law enforcement of some kind, but they won’t identify themselves, and all insignias and name plates have been removed. pic.twitter.com/q5dmdMgkLV

The badge on the left shoulder of one officer appears to be from a “Disturbance Control Team” at the Bureau of Prisons, my colleague Russ Choma found. Again, federal riot police.

Who can identify this logo on "federal government" riot control who are refusing to identify themselves in DC? pic.twitter.com/0YiaoGH0wd

My Tuesday tweets about the officials who would only say they worked for DOJ drew extensive speculation that the men were private contractors, possibly affiliated with Erik Prince, the brother of Education Secretary Betsy DeVos and founder of the former private military contractor Blackwater. There was so much speculation that Blackwater, which no longer exists, trended on Twitter for hours. There is no evidence these guys are private contractors or connected to Prince. But that so many people suspected this link highlights an obvious risk of what Barr and Trump are doing. People are trying to puzzle out the identity of armed forces facing us because the government won’t say.

American citizens are left confronting unidentified apparent paramilitary police with no way of knowing what legal authority, if any, these forces vested with the power to kill us possess. That is not occurring in Ukraine, where Russia’s “little green men” occupy parts of Donbass, or in dystopian fiction. It’s happening today, a few feet from the White House.