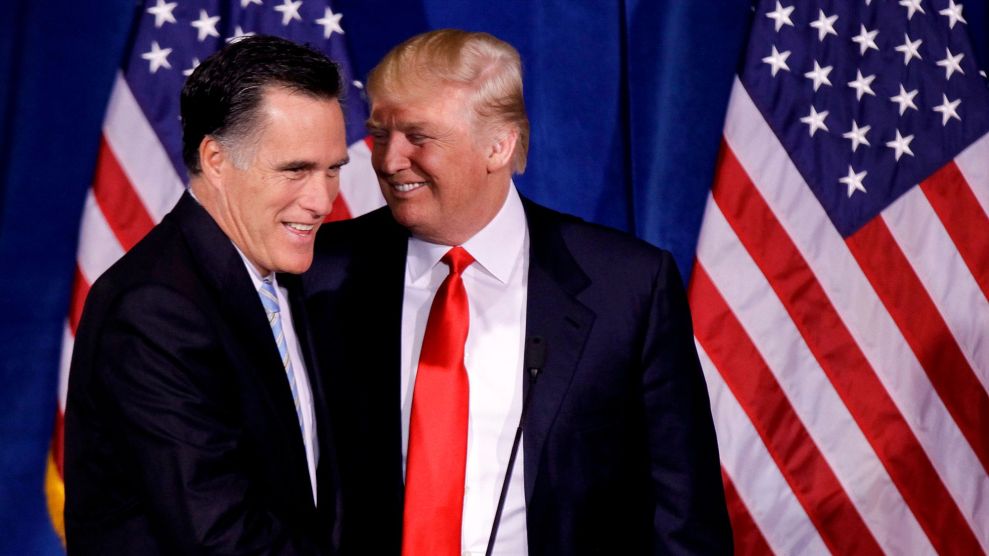 Mitt Romney appears to have gotten under Donald Trump’s skin—and, as so often happens, the Trump White House is reacting by lying, this time about Romney’s most infamous quote.

On Sunday, Romney, the GOP’s 2012 presidential nominee who is now a senator from Utah, joined a Black Lives Matter protest in Washington, DC. A video of him trekking along with other demonstrators has drawn more than 10 million views.

.@MittRomney is marching with a group of nearly 1,000 Christians to the White House. Here he is on video saying why he’s walking: “… to make sure that people understand that Black Lives Matter” https://t.co/KCxJNchCMs pic.twitter.com/Za0Am2WL8g

Naturally, the next day, White House mouthpiece Kayleigh McEnany was asked about Romney’s moment of resistance and whether Trump agreed with Romney’s support of “the core message of Black Lives Matter.” She was well prepped for the question and quickly pounced. President Trump, she said, “won 8 percent of the black vote; Mitt Romney won 2 percent of the black vote.” And she pivoted to Romney’s 47-percent quote, a story broken by Mother Jones in 2012. She declared that “Mitt Romney has a lot of words,” and, reading from her notes, she reminded people that Romney had said that 47 percent of Americans are “dependent upon government, believe they are victims, believe the government has a responsibility to care for them.” She continued, “The president takes great offense to those words.”

But that was false. Trump did not take offense. And he has even endorsed the message that half of Americans are ne’er-do-well free-riders.

During the 47-percent controversy, Trump adopted a clear stand: Romney had said nothing wrong. In an interview with CNN, Trump defended Romney and said it was an issue that deserved debate. “I don’t think he should be apologizing,” Trump said, adding that “it’s a point of view, and it’s probably something that they have to have out.” He also criticized the media for making “a big deal out of it.”

Trump tweeted the same, telling Romney to “stay on offense” and not apologize.

With 49 days until the election, @MittRomney needs to stay on offense. He should not be apologizing. Deflect onto Obama's record.

Fast forward three years: Trump, now a presidential candidate, picked up this Romney torch. During a 2015 interview on Fox News, Sean Hannity asked Trump if he could lift low-income Americans out of poverty. Of course, he could, Trump replied. He then remarked:

In a briefer and more direct fashion, Trump had reiterated what Romney said. He even added three more percentage points. Half of Americans, according to Trump, were freeloaders who expected to be carried by the other half. Trump’s comment at the time did not cause a fuss. It was just one of the gazillions of outrageous and false statements he was tossing out on the campaign trail. But it was fully in sync with the conservative talking point (expressed by Romney in 2012) that the world is divided into makers and takers and that many Americans are social parasites.

It’s no shocker, but McEnany, who not long ago promised never to lie to the media and the public, lied about all this. Trump was not offended by Romney’s 47-percent comment. He advised Romney to stand his ground and not apologize. (Romney, whose campaign book was titled No Apology, did apologize.) And Trump even expressed the same haughty and elitist view of the American people. The only difference is that his estimate of number of Americans he considered irresponsible free-riders was higher.