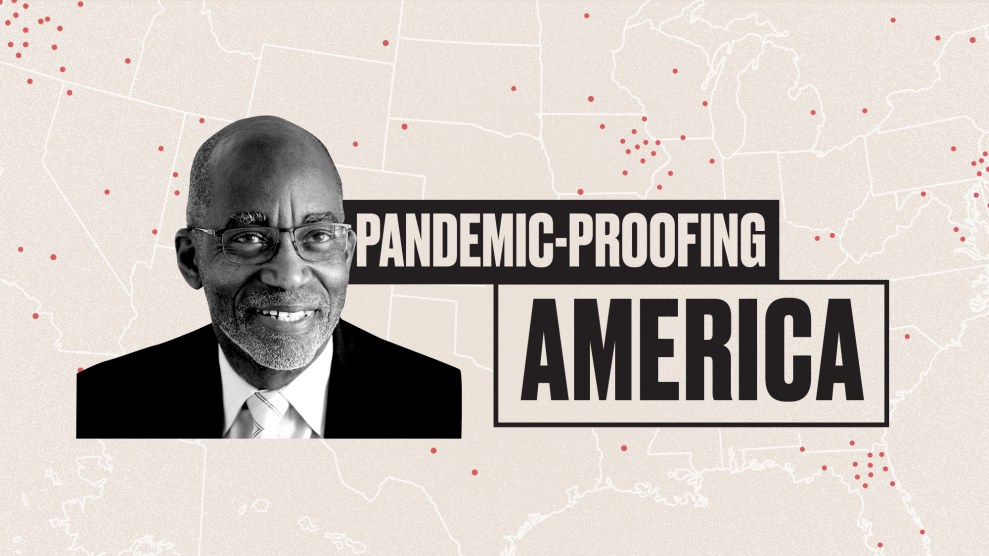 David R. Williams has dedicated his career to studying how racial and economic inequality makes societies sicker. The chair of the department of social and behavioral sciences at the Harvard T.H. Chan School of Public Health, he was among the first to study how the stress that Black people experience from racial discrimination makes them more vulnerable to chronic conditions such as heart disease, diabetes, and high blood pressure—all of which are thought to be part of the reason that COVID-19 has disproportionately impacted communities of color. In addition to his academic work, Williams has served as a director for Robert Wood Johnson Foundation’s Commission to Build a Healthier America, which aims to eliminate racial and socioeconomic gaps in health.

On why COVID-19 is ravaging Black communities: COVID-19 has not created racial disparities in health. It has just been a magnifying glass, highlighting racial disparities that have existed for 100 years. The pattern we observe for COVID-19 exists for most of the leading causes of death in the United States. The same pattern is true for heart disease, for cancer, for stroke, for diabetes, for obesity. So for those of us who work in the field, we don’t see anything surprising about COVID-19. The question becomes why: Why has COVID-19 hurt African American communities so badly?

The first point I will make is that the African American community is being hurt badly because the African American community is markedly disadvantaged economically. Most Americans think that we have achieved greater equality in economic status in the United States by race than we actually have. If I look at a 2019 report from the US Census Bureau, which provides median household income by race in the United States for the year 2018, for every dollar of household income white households receive, Black households received 59 cents. What says a ton about that 59 cents figure is that is identical to the Black-white gap in income in 1978, which was the peak year of the narrowing of the Black-white gap in income as a result of the civil rights movement and policies against the war and poverty of the 60s and 70s. I’m saying in 2018, we are exactly where we were in 1978. Most of my students think we have made much more economic progress in the United States than that.

But the income gap understates the real gap in economic circumstances and economic resources for the African American community. The latest Federal Reserve Board data on race and wealth says that for every dollar of wealth that white households have, Black households have 10 pennies and Latino households have 12 pennies. That means that many people of color are one paycheck away from being homeless. When you have no wealth, you have no economic reserves, and you cannot cushion shortfalls of income.

Because many people of color are working low-income, non-salaried jobs with unpredictable, unstable hours, they have higher levels of exposure. Many communities of color are overrepresented in what we’re calling the essential workers—transit workers, building maintenance staff, grocery store employees—they have to keep working. They can’t take the preventive actions that have been recommended to us by the state and others.

Dolores Acevedo-Garcia is a public health colleague at Brandeis who has created a child neighborhood opportunity index for the United States. She’s looking at the degree of opportunity, the quality of schools, the quality of early childhood centers, the percent of residents with high skilled jobs or high school education, the level of homeownership level, of public assistance, air quality, water quality, hazardous waste sites. Then she looks at other resources like green space, healthy food outlets, and walkability. She found that two-thirds of all Black kids and about 60 percent of all Latino kids are growing up in low-opportunity neighborhoods, compared to about one in five white and Asian kids. If you look at the flip side, two-thirds of white and Asian kids reside in high opportunity neighborhoods. The stark economic differences we see are not acts of God are not random events that didn’t just happen. They reflect the successful implementation of social policy.

The stark economic differences we see are not acts of God are not random events that didn’t just happen. They reflect the successful implementation of social policy.

On why Black people need herd immunity against chronic conditions: The most vulnerable are people who have what we call co-morbidities. People who have high blood pressure. People who are obese. People who have diabetes. For all of these conditions, African Americans get them at markedly younger ages. And the question is why? My colleague Lisa Cooper and I published an editorial in the Journal of the American Medical Association where we talked about creating a new kind of herd immunity. We have to look at disadvantaged populations and change the social and economic conditions that put them at high risk for disease—so when the next infectious disease comes, they are stronger because they are no longer exposed to the conditions that drive illness in the first place.

They also experience higher levels of physiochemical stressors. It hasn’t gotten a lot of attention, but at least one study by colleagues at Harvard found that people who live in areas have high air pollution in the United States at higher risk of getting COVID-19. And if they get COVID-19, it’s more severe.

Then, there is the added layer of stress from discrimination. Over the years, I have developed something called the everyday discrimination scale. It doesn’t capture the big things, like being stopped, physically threatened, and abused by the police—I have another measure that captures that—but the everyday discrimination scale just captures little indignities. You receive poor service at restaurants and stores. People act as if they think you are not smart. They are afraid of you, or they think you are dishonest. Little indignities. People who score high on that scale have higher rates of heart disease, early onset of diabetes, higher blood pressure. They have higher rates of mental disorders, early onset of breast cancer, higher levels of obesity.

Some researchers argue because of all of this cumulative level of stress, African Americans are literally aging physiologically biologically more rapidly than whites.

Some researchers argue because of all of this cumulative level of stress, African Americans are literally aging physiologically, biologically, more rapidly than whites. So you can look at a Black and white person, both age 50. Physiologically, the African American in some studies is seven and a half to 10 years older than his white counterpart. Why? Because your age not only captures how long you have lived. When you live in bad environmental conditions, your age is also capturing how long you’ve been exposed to those conditions, and how physiologically compromised and dysregulated the biological systems of your body have become as a result of those exposures. And that’s why Blacks have high blood pressure and heart disease and diabetes and kidney disease at younger ages. You go across the major chronic conditions, they have them all at younger ages.

On why we need a Marshall Plan for disadvantaged communities. I sometimes talk about the need for a Marshall Plan for disadvantaged communities in the United States. We can make investments to create healthier homes and healthier neighborhoods. We can provide ladders of opportunity in terms of high quality, preschool education, high quality education, access to job skills that can make you competitive in the labor market so you can take care of your family. Public Health people use the fancy language of the social determinants of health. If we change the underlying conditions, we will, in fact, dramatically improve health. I’ll give you one example, the Abecedarian Project in Chapel Hill, North Carolina, took poor children, 80 percent African American, and randomized them in an early childhood program. They went to this program birth through age five, and they received high quality, nutrition, medical care, intellectual stimulation. They’ve now been followed to their mid 30s. Those who got the program compared to the control group had markedly lower cardiometabolic risk. Looking at their blood pressure looking at the obesity levels, looking at other markers of heart disease, they’re doing a whole lot better.

An earlier study like this in Ypsilanti, Michigan, looked at an African American public housing project. Teachers intervened with them at age three and four, before they went to school. They’ve now been followed for 40 years. Those who got the intervention controls compared to a control group had higher education, higher income, higher savings in their 40s. Higher rates of marriage, less involvement with the criminal justice system over the lifetime, less involvement in the social service system over the lifetime. For every dollar invested is a $17 return to society. We have randomized controlled trials, the gold standard of scientific research that tells us these kinds of initiatives work to produce greater economic productivity. They work to produce better health, they are good for the economy, they save society money. Why aren’t we doing more of it?

Public health researchers Thomas LaVeist and Darrell Gaskin at Hopkins calculated that racial inequalities and health cost the US economy over $300 million a year. Part of that is the extra cost of the higher rates of illness. But the biggest part of that is a loss of productivity. We are wasting the productive capacity of the United States by allowing these disparities to persist and leaving these communities without access to economic opportunity.