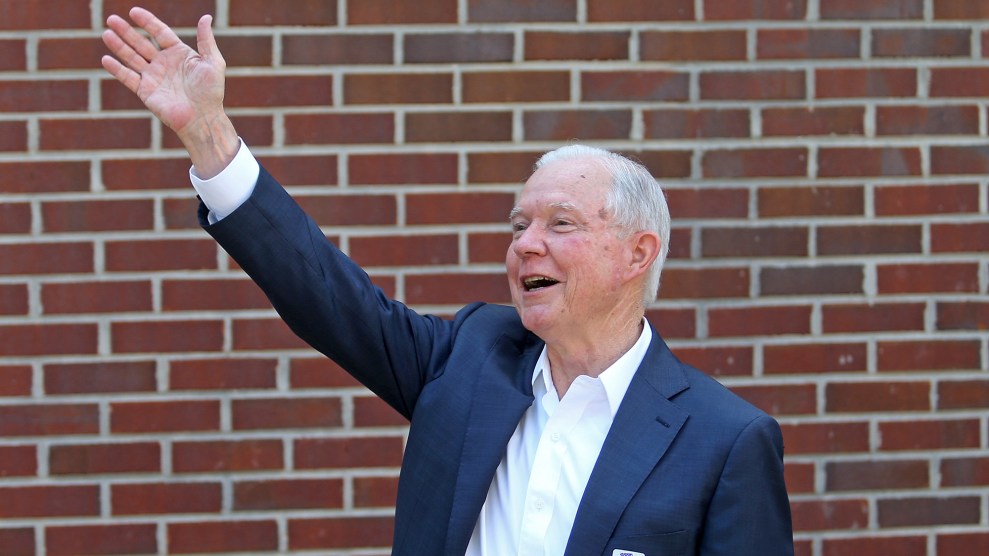 Jeff Sessions waves to supporters after voting in the Alabama Republican primary runoff for the U.S. Senate on July 14, 2020 in Mobile, Alabama. Michael DeMocker/Getty Images

Jeff Sessions’ political career came to an end on Tuesday. Sessions had sought to recapture the Senate seat he held for 20 years before becoming President Donald Trump’s attorney general. In his stead, Alabama Republicans nominated Tommy Tuberville, a former college football coach. The former prosecutor, senator, and attorney general went out the same way he entered the national stage more than three decades ago: in a blaze of racism.

Racism defined Sessions’ entire career, but racism is not what ended it. In fact, it was Trump’s patronage that put Sessions and the white grievance he long embodied at the center of American politics. Sessions’ political career is over now because he realized too late that Trumpism isn’t just about the worldview; it’s also about Trump himself, a cult of loyalty that Sessions ran afoul of before it was clear how easily Trump cast people aside.

Sessions was the first senator to endorse Trump in 2016, and he served as a trusted campaign adviser. The attorney general position was his reward—the zenith of his career where he could finally make his reactionary fever dreams a reality. Sessions got to work rolling back federal oversight of police departments, orchestrating Trump’s family separation policy at the border, targeting sanctuary cities, deporting asylum seekers, and supporting voter suppression schemes. Though Sessions faithfully and effectively enacted Trumpism as attorney general, he recused himself from the investigation into Russian interference in the 2016 election. Trump was furious at the decision, which ultimately led to the appointment of special counsel Robert Mueller.

Sessions was loyal to Trumpism as an idea, but Trump wanted someone loyal to him above all. Sessions had caved, for once, to the calls of the mainstream to abide by recusal rules before he realized just how brazenly Trump would defy norms, rules, and laws. The day after the 2018 midterms, Trump fired him. How hard it must’ve been for Sessions to see his own project of white restoration taken away from him just as he was accomplishing so much. When Sessions decided to try for his old job in the Senate, Trump endorsed Tuberville, whose campaign message can be summed up as God sent us Donald Trump.

Sessions’ worldview and his politics were uncouth even as he crusaded for them as a young prosecutor. He began his career in Mobile, on the southern coast of Alabama, where old-money aristocracy met white grievance populism. The business-minded Republicans in the state found both the white grievance and the conservative populism unbecoming, even if they were Republicans for the same reason he was: The Democratic Party had embraced civil rights. “In North Alabama, where the knowledge economy is centered, that’s the Republican establishment,” Alabama historian Wayne Flynt told me shortly after Sessions became attorney general in 2017. “They never liked Jeff Sessions very much. Too many connections to race, to right-wing conservatism, to the white evangelical rabble-rousers.” But he wasn’t too extreme to climb the political ladder.

Reagan appointed him US attorney there in 1981, and Sessions took up the racist drug war with zeal, meting out the harshest sentences possible. He also went out of his way to take on voting rights activists. One of his earlier cases, his prosecution of the Marion Three, became a seminal moment in his career. Despite the Voting Rights Act, Black people in Alabama’s rural counties lacked political power. As Mother Jones previously reported:

So community organizers, led by Albert Turner, a former aide to Martin Luther King Jr., started teaching African Americans to vote absentee in order to boost turnout, particularly among elderly voters struggling to make it to the polls, which in some places were open for only four hours. In 1982, local candidates backed by Turner and his allies finally won. Two years later, Sessions began investigating absentee ballot use by African Americans in five rural counties where black voters’ influence was ascendant. He charged Turner, Turner’s wife, and another organizer—known as the Marion Three—with mail and voter fraud for allegedly tampering with ballots. During the trial, his case fell apart, and the jury found the three activists not guilty.

Soon after, in 1986, Reagan nominated Sessions for a federal judgeship. His prosecution of the activists was part of why the Senate rejected his nomination. It didn’t help that witnesses also testified that he had called a Black colleague “boy,” a white civil rights lawyer a disgrace to his race, and the ACLU and NAACP “un-American.” This was how the nation first met Sessions.

Sessions bristled at being labeled a racist, but he never changed. When the Senate confirmed him as attorney general in 2017, his Republican colleagues tried to scrub the stench of racism off him by relitigating the racism charges from 1986, which Sessions denied. In 2020, Sessions’ own campaign couldn’t be bothered to keep up the charade. In an interview with the New York Times Magazine recently, he seemed to refer to the renowned Black scholar Henry Louis Gates Jr. as “some criminal” in a factually muddled recollection of the Obama “beer summit.” The Times asked the campaign if Sessions had indeed been referring to Gates. A spokesperson didn’t even try to correct the statement.

In 1994, Sessions was elected attorney general of Alabama, a perch from which he supported lifetime prison sentences for children under 14 and the use of chain gangs for prison labor before embarking on his 20-year Senate career. In the Senate, he was known as a back-bencher, too extreme to be a leader but skilled enough to repeatedly help kill immigration reform efforts. He also played a role in keeping Black judges off of the federal bench in Alabama, denying them the seat he had been denied in 1986. His office struck up a productive relationship with Steve Bannon’s Breitbart News and nurtured aides who would go on to be anti-immigrant footsoldiers, including Trump acolyte and white supremacist Stephen Miller.

When Trump descended his golden escalator calling Mexicans rapists, Sessions had found his man. Even now, however fractious the dissolution of their working relationship, there is little actual daylight between the two. Sessions rarely defends himself against Trump’s public floggings, but he’s quick to defend Trump. It’s ironic that Sessions’ loss on Tuesday comes as Trump himself has launched a broadside against voting by mail, alleging incorrectly—in a move right out of the Marion Three playbook—that they are a source of fraud. Over the last few months, their 2020 campaigns were neoconfederate twins, including anti-immigrant policies and nostalgia for white supremacy. When a Senate committee voted to rename military bases named for confederate generals, Sessions called it an attack on confederate soldiers.

Here lies the political career of Jefferson Beauregard Sessions III, named for two confederate heroes like his father and grandfather before him—the only monument to the Confederacy that Trump was eager to remove.