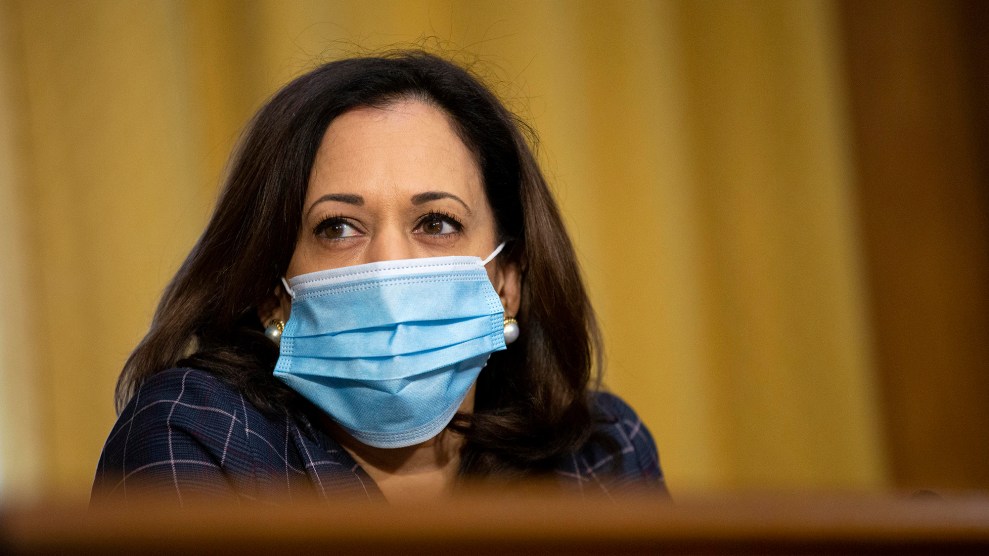 When Joe Biden announced in March that he would select a woman as his running mate, it was hailed as a milestone. At 77, Biden might not run for reelection or even finish his first term, but he could play an instrumental role in breaking the highest glass ceiling by making a woman his most likely successor. “I view myself as a transition candidate,” Biden told donors this spring: “You got to get more people on the bench that are ready to go in—‘Put me in coach, I’m ready to play.’ Well, there’s a lot of people that are ready to play, women and men.” Good for him.

Stories about Biden’s choice have put a longstanding sexist narrative back in the news: Ambitious women cannot be trusted.

But with the vice presidential selection finally around the corner, the conversation no longer sounds anything like progress. Instead, reporting on deliberations inside the campaign suggests their decision-making is being shaped by the same sexist concerns about women in leadership that helped keep Hillary Clinton out of the White House four years ago. While it’s unclear if the accounts are accurate or present a complete picture, the story they tell is deflating, familiar, and harmful—that the campaign is distrustful of women who are ambitious or who otherwise display leadership traits that somehow don’t seem to bother people when exhibited by men. They want a woman, just not that kind of woman. Sound familiar?

The issue seems to mainly come up in talk of Kamala Harris, the California senator and former presidential contender. Harris has been the most obvious choice for months because she checks so many boxes; she has plenty of experience, she’s endured the national spotlight, and she’s a woman of color just like the base of the Democratic Party. But this spring’s protests against police brutality changed the political landscape, suddenly giving wider salience to standing progressive criticism of Harris’s record as a former prosecutor and California attorney general. The Biden campaign widened its search.

But today, Harris remains a top contender, and the hesitation, according to anonymous sources quoted in Politico, is not Harris’s criminal justice record. The real issue is her ambition. Ambition, campaign insiders fret, might drive her somehow to be disloyal to Biden, meaning she can’t be trusted. In one Politico article, someone described as a “close Biden ally” explained that the problem with Harris (and, for that matter, Sen. Elizabeth Warren) is that she is not a team player. The story does not attempt to explain why she isn’t a team player, and instead just takes for granted that the junior senator from California, who has co-sponsored lots of legislation alongside other senators, is somehow not a team player. This designation, without any explanation, sounds a lot like a euphemism for female ambition and the fears tied up in it.

According to Politico‘s sources, Biden has decided he doesn’t want an ambitious vice president, despite previously stating that he needs someone who will be ready to jump into the job. An ambitious woman sounds good on paper, but in reality is somehow not. Here’s how one Biden adviser put it in the same Politico story: “If you assume Biden isn’t going to run for reelection you don’t want someone who is only paying attention to 2024…The decisions that need to be made are not going to be easy. Biden’s vice president might want to dodge a lot of tough issues if they only have an eye on 2024.” Biden is one of the most ambitious politicians alive; he served in the Senate for decades, ran for president twice, served as vice president, and then in his seventh decade decided to run for president again. Now, somehow, he reportedly thinks that an ambitious woman won’t support him even as he desires—as his confidants whisper to the press—a vice president like he was to President Barack Obama.

Some of the distrust of Harris appears to be coming from former Sen. Chris Dodd, a Democrat from Connecticut whom Biden tapped to assist the vice presidential search process. According to another Politico story on Monday, Dodd cannot get over the fact that Harris attacked Biden during a presidential primary debate last summer for his stance on school busing in the 1970s and isn’t sorry about it. “She laughed and said, ‘That’s politics.’ She had no remorse,” Dodd reportedly told a donor. Dodd, a veteran politician, apparently so dislikes Harris that he has pushed instead for Rep. Karen Bass of California, who, though a powerful lawmaker, has not sought the national spotlight nor the vice presidential nod. A Dodd confidant told Politico that Dodd is pushing Bass because “she’s a loyal No. 2. And that’s what Biden really wants.”

Bass is a progressive stalwart and impressive legislator who does not deserve to be trumpeted as the non-threatening Black woman alternative to Harris’ scary ambition. But apparently that’s how she is seen by some. Meanwhile, Harris allies are busy trying to convince Biden’s team and the press that Harris is trustworthy. It seems like the ultimate insult to a woman vice presidential pick that in order to clinch the post she has to convince the campaign that she possesses just the right amount of ambition—enough to rise to the top tier of American politics but not so much that she cannot be trusted to actually do the vice president’s job of putting the president first.

Whether such accounts of Biden’s decision-making are an accurate portrayal of his worries about Harris and other potential picks or a projection of other people’s biases against women, they’ve ensured a longstanding sexist narrative is again part of the news cycle: Ambitious women cannot be trusted.

There are legitimate reasons why Harris may not be the best choice for vice president. There are also legitimate reasons to question whether the constant worrying about loyalty, ambition, and trustworthiness are actually more about the biases of the people carrying out this process and talking to the press about it. It’s hard, for example, to think about Dodd’s objections to Harris and not flash to his own treatment of women decades ago as the drinking buddy of the late Sen. Ted Kennedy.

Picking and electing a woman as vice president would help demonstrate that the biggest barrier to putting a woman in the White House has long been our own collective sexist hangups about ambitious women—and not any actual problem with a woman president or vice president. That progress is significant, but the selection process is a reminder that it is still being shaped by the same hangups that hold women back.