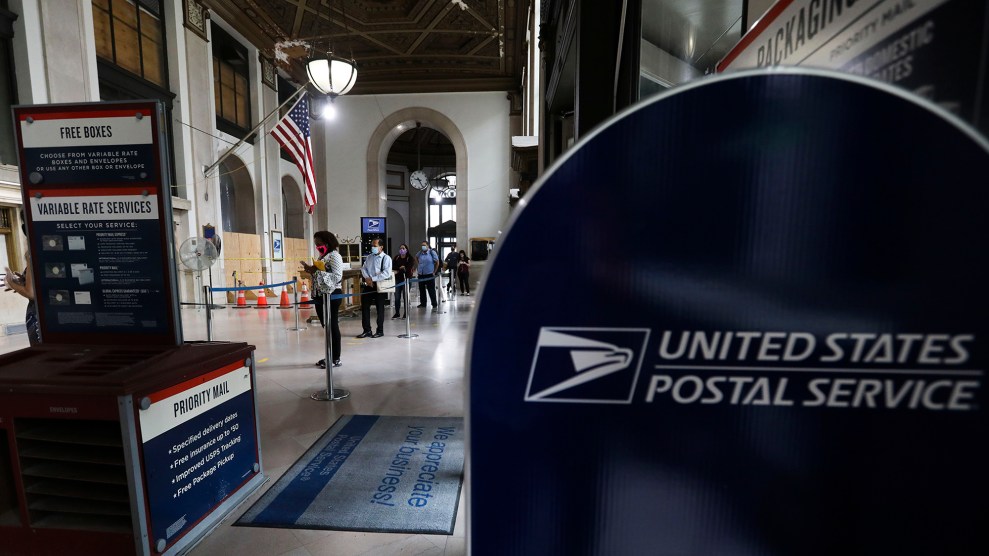 People wait for service at a post office in New York on Wednesday.Wang Ying/Xinhua via ZUMA

As Democrats made their final plea for Americans’ votes on the last night of their party convention, their central message was about preserving the right to vote itself.

Voting rights took center stage on Thursday evening as party leaders and allies sought to overcome the barriers to voting the Trump administration has erected. The party offered viewers practical advice about how to successfully cast a ballot by mail and framed the current partisan divide over ballot access as the modern extension of the civil rights battle for a fair and inclusive democracy.

President Trump has spent his entire presidency trying to delegitimize the election process with claims of fraud. Today, afraid of losing, his administration is dismantling the US Postal Service one sorting machine and overtime hour at a time, threatening the ability of voters to cast their ballots through the mail during a pandemic. Democrats used their last night of the convention to rebut him head on.

Host Julia Louis-Dreyfus kicked it off by saying she would vote by mail, just like Trump and his family members and staff, who have also cast absentee ballots even as they try to make it harder for others to do the same.

"Personally, I plan to follow the example of six current cabinet members, vice president Pence, and president Trump himself, and vote by mail." – @OfficialJLD #DemConvention pic.twitter.com/unoHUyE8jr

Comedian Sarah Cooper, who gained TikTok fame by lip-syncing Trump’s own words, picked up the theme, mocking Trump’s attempt to insert doubt and confusion into the process of voting by mail:

The convention also featured two Democratic secretaries of state, Alex Padilla of California and Jocelyn Benson of Michigan, who gave serious advice to viewers on how to cast a ballot and make it count. “There is absolutely no difference between voting by mail and voting absentee,” Benson explained, rebutting Trump’s fallacy that absentee voting is safe and voting by mail is somehow subject to fraud. “Republicans and Democrats agree it is safe” to vote by mail, she said. “If you’re planning to vote from home, request and return your ballot early.” Trump has warned that ballots counted after Election Day may be fraudulent. Padilla explained that was not true. “Election results may take a little longer this year,” he said. “But Democrats will fight to make sure your ballot is counted.”

The Biden campaign and the Democratic Party also sought to situate this current struggle as the latest chapter in the long battle for voting rights. Atlanta Mayor Keisha Lance Bottoms spoke from her home state of Georgia, which has gained national headlines for its long lines at the polls and assault on voting rights in recent years, urging Americans to use their right to vote that the late Rep. John Lewis of Atlanta fought to secure. “Congressman Lewis would not be silenced,” she said. “And neither can we. Our votes can be our voice.”

In a documentary-style video, the convention then paid tribute to Lewis and his fight for voting rights. Finally, Rep. Deb Haaland (D-N.M.), a Puebla Indian, reminded viewers that Native Americans were not guaranteed the right to vote until 1962.

Democrats are taking access to the ballot seriously this year because Republicans are too. As the Democrats urged voters not just to vote but to take precautions to make sure their votes are counted on Thursday night, Trump promised to do everything he could to scare voters away. Appearing on Hannity on Fox News during the convention, Trump pledged to have law enforcement monitoring the polls. “We’re going to have sheriffs and we’re gonna have law enforcement and we’re going to have hopefully US attorneys,” he said.