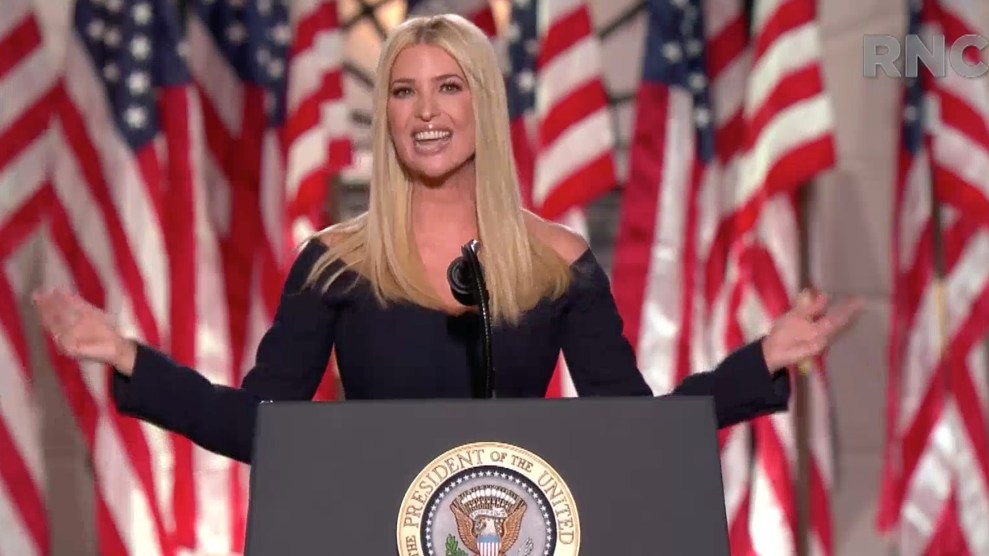 Toward the end of her Thursday night address to the Republican National Convention, Ivanka Trump, the president’s daughter and senior advisor, looked out on the crowd on the White House lawn and took one more swing at the piñata of the week: Joe Biden and the “political elite” who backed him.

“Dad, people attack you for being unconventional, but I love you for being real, and I respect you for being effective,” she said. “Our President refuses to surrender his beliefs to score points with the political elite.”

“To my father, you are the elite,” she continued. “He only cares about scoring points with you.”

Considering how many Republican bigwigs, donors, and cabinet officials (but enough about Wilbur Ross!) were in the crowd, sitting uncomfortably close in front of the stage, it might have been the truest thing she said all night.

But it wasn’t just the explicit message of Ivanka Trump’s speech that stood out—a reprise of her 2016 effort to recast a racist and misogynist grifter as a champion of working women. It was what she symbolized by being there. It’s not just the nepotism and corruption that has in large part defined the last four years. More than anything, she represents the future.

Her father was hardly the only person who cares about scoring points with the Republican elites in the audience. Political conventions are showcases not just for the candidate being nominated, but for everyone who wants to follow in their footsteps. In that respect, the 2020 RNC wasn’t just a preview of this fall’s campaign, it was foreshadowing many, many Republicans campaigns in the years to come. And the politicians, and wannabe politicians, who spoke this week aren’t going away any time soon.

So you could tell a lot about the direction of the party by who was in attendance and who wasn’t. There was no George W. Bush, the only other living Republican president. (No Dick Cheney either.) There was no Mitt Romney, the last Republican presidential nominee before Trump. There was no Paul Ryan or John Boehner. The two most popular governors in America, Larry Hogan of Maryland and Charlie Baker of Massachusetts, had other things on their plates. With the exception of Ben Carson (now a loyal member of the cabinet) and Sen. Rand Paul, none of the candidates who ran against Trump in 2016 spoke.

Instead, over the course of the convention, we heard from the kinds of figures who actually are in good standing with the party these days—people like Missouri Sen. Josh Hawley; Florida Rep. Matt Gaetz; Texas Rep. Dan Crenshaw; Arkansas Sen. Tom Cotton; future North Carolina Rep. Madison Cawthorn; Secretary of State Mike Pompeo (in taped remarks from Jerusalem); and former UN Ambassador Nikki Haley. Some of those figures are certain to run for president in 2024. The president’s daughters, eldest sons, and wife all spoke. With the marquee billing given to Ivanka and Donald Trump Jr., this led to natural, although certainly not new, speculation about what the future might hold for both of them.

Really looking forward to the Ivanka vs Eric debates in the 2024 primaries.

My new theory is that Ivanka and Don Jr. are both running in 2024 and it’s gonna get VICIOUS.

It’s a little early to start polling Iowa or get too into the weeds about the family dynamics (though I wouldn’t bet against intra-family intrigue where the Trumps are concerned), but a clear lesson of the last four days is that Trump’s political ethos won’t end with Trump. A whole generation of ambitious Republican officeholders now own this, and they’ll run on it too for as long as it works. The 2020 RNC was the future of the GOP for at least, well, the near future.