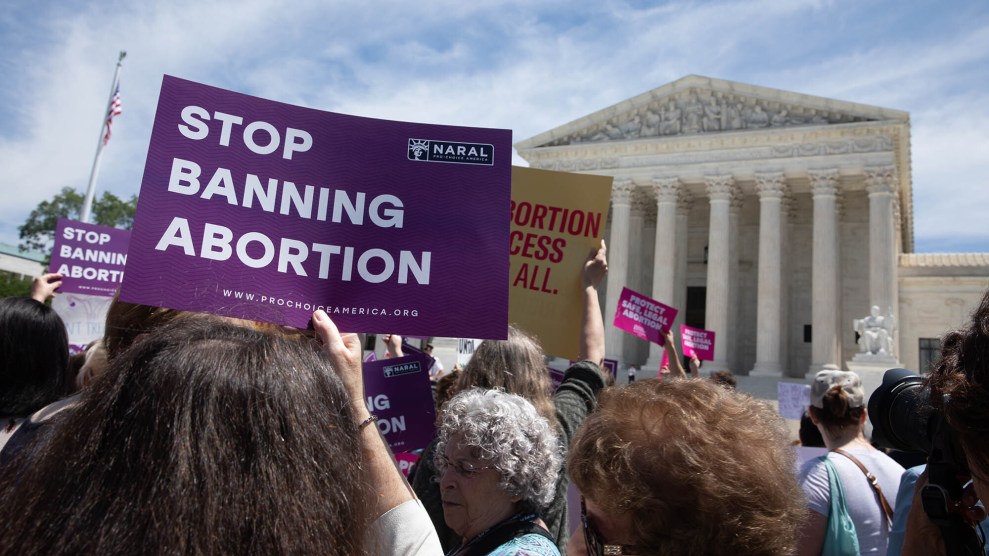 Abortion rights activist gathered outside the Supreme Court to protest against abortion laws in May 2019.Aurora Samperio/NurPhoto via Getty Images

A court ruled on Friday that a strict abortion ban in Arkansas can move forward—and it used the recent Supreme Court decision regarding abortion rights, the one so many celebrated as a victory, to do it.

A panel of three judges—one of whom was appointed by President Donald Trump, the other two by previous Republican presidents—on the Eighth Circuit Court of Appeals reversed a lower court’s decision that would have blocked a law banning the most common procedure for second-trimester abortions, dilation and evacuation. Citing Chief Justice John Roberts’ concurrent opinion in the recent June Medical Services v. Russo case, they wrote that a package of anti-abortion laws that passed through Arkansas’ legislature in 2017—one of which is inflammatorily dubbed the “Arkansas Unborn Child Protection from Dismemberment Act”—is allowed to stand because there is no established balancing test between the “undue burden” protection famously set in 1992’s Planned Parenthood v. Casey and the Chief Justice’s contention that “nothing according to Casey suggested that weighing of costs and benefits of an abortion regulation was a job for the courts,” as Roberts wrote in his opinion earlier this summer. “Pretending that we could pull that off would require us to act as legislators, not judges,” the Eighth Circuit opinion says, quoting Roberts in the June Medical decision.

Roberts did NOT join the liberal bloc wholesale. He concurred, writing a very carefully crafted opinion recognizing that the Louisiana law in question was blatantly unconstitutional because of the court's 2016 ruling in Whole Women's Health.

This decision a huge blow to the people of Arkansas—and to anyone across the country who supports the right to an abortion. At the time the decision came down, I wrote that June Medical was not exactly the clear-cut win some people celebrated it as, and that Roberts’ opinion made it much more complicated:

It’s also worth noting that the precedent established in Whole Woman’s Health isn’t the only one Roberts is paying careful attention to. “One line that really caught my attention,” [Mary] Ziegler, [a professor at the Florida State University College of Law and the author of Abortion and the Law in America] explains. “He said that the Casey court only struck down one abortion restriction; in his view, that’s the undue burden test. The undue burden test is a test that lets legislators do most of what they want”—in other words, it’s an ill-defined, subjective provision that unleashed a rat race in conservative legislatures to see who could get the closest to the line of creating an “undue burden” on women seeking abortions, without courting an expensive lawsuit that would ultimately kill the law in question.

Barely more than a month later, we’re already seeing how these complications can screw over women. And this almost certainly won’t be the last time Roberts’ opinion is used to justify such anti-abortion shenanigans; clearly, anti-abortion legal minds are paying attention to his signals.

The four laws in questions would have the power to inflict significant harm by banning dilation and evacuation, which is the most common (and safe) procedure for pregnant people who are past 14 weeks’ gestation and make it a class D felony to perform; there is no exception for rape or incest. Another law in the package would also enable spouses, parents, or legal guardians to sue physicians who perform abortions for damages and obtain injunctions preventing the abortion to begin with. The last two laws would regulate the disposal of fetal tissue and require physicians to obtain medical records before an abortion to somehow determine that the abortion isn’t motivated by sex selection.

“All four of these laws severely interfere with access to abortion in Arkansas,” says Ruth Harlow, the senior staff attorney at the ACLU’s Reproductive Freedom Project who argued the Arkansas case. “We are doing everything we can to make sure that they continue to be enjoined, and that they don’t interfere with access to that essential health care, particularly during the COVID emergency.”

The ACLU also contends that the way the Eighth Circuit has so explicitly hung its decision on Roberts’ opinion isn’t even legal. “One justice can’t overrule the Supreme Court, the majority,” Harlow tells Mother Jones. “Instead of paying attention to just what the majority rule in June Medical...they considered the dissents, along with Roberts, and that is something you can’t do.”

The ACLU and the Center for Reproductive Rights, which are arguing the case, now have 14 days to decide how they wish to proceed and file accordingly; if they do nothing (which is highly unlikely), the laws could take effect seven days after that at the earliest, on August 28.