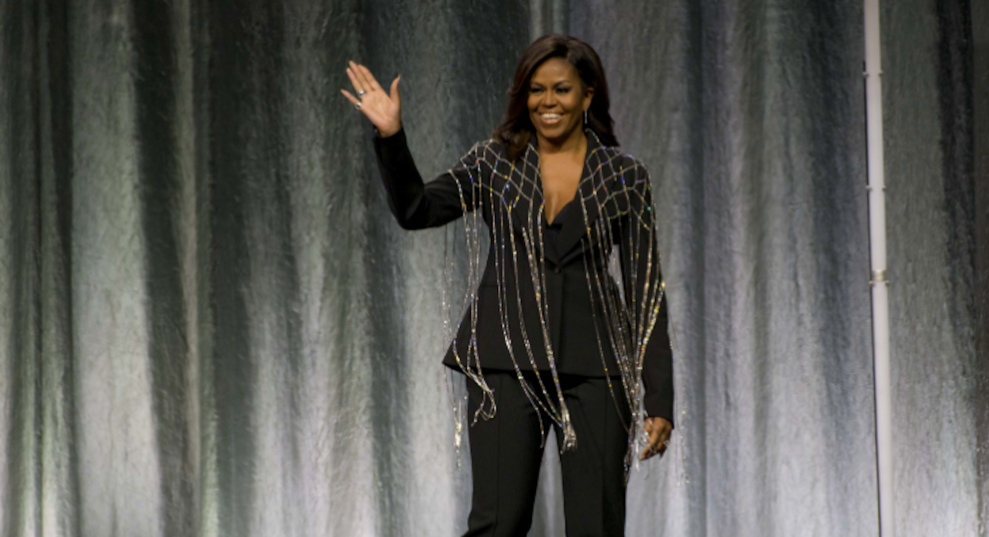 It’s become a familiar story. The outbreak of the coronavirus in the United States, a public health disaster now responsible for more than 160,000 deaths, has left quite a few of us feeling unmoored. A third of Americans, trapped in an endless loop created by a disastrous president apparently eager to sacrifice huge swaths of the country’s population when he believes it’ll serve his interests, are showing signs of clinical anxiety or depression, with even more experiencing a plummeting, if not already demolished, sense of control.

Yes, we all feel like garbage. Now, in this hellish cycle of doom former first lady Michelle Obama shared some news this week.

“I know that I am dealing with some form of low-grade depression,” Obama told her friend and former host of NPR’s All Things Considered Michele Norris in the second episode of The Michelle Obama Podcast. “Not just because of the quarantine, but because of the racial strife, and just seeing this administration, watching the hypocrisy of it, day in and day out, is dispiriting.”

“I’m waking up in the middle of the night, ’cause I’m worrying about something, or there’s a heaviness,” she continued, further building a sense of relatability. Her energy depleted during darker stretches of time, Obama revealed, she’s had to “surrender” to the guilt of not exercising.

The remarks were at once familiar and striking. After all, it’s no small thing for one of the most admired people in the world, a woman commonly associated with strength and grace, to come out and say that she too isn’t feeling so great these days. And this is coming from a public figure who, during the pandemic, has seen the release of Becoming, a critically acclaimed Netflix documentary of her life, as well as a major deal with Spotify to launch the aforementioned podcast. For many of us who feel like boring disasters on good days, Obama’s revelation felt like the refreshing equivalent of the Instagram vs. Reality meme. With just a few brief moments of honest reflection, the former first lady managed to puncture a sense of profound grief and alienation simply by sharing some of our collective human vulnerability.

In her conversation, Obama was also performing a kind of public service. Since the start of the pandemic, countless news stories have emphasized the importance of being open about one’s mental health struggles in order to reduce the sense of isolation that is so much a part of anxiety and depression. Not to mention remove the stigma that is so often attached to mental health issues.

But of course, it didn’t take long for some on the right to weaponize Obama’s candor since it included a slight dig at President Donald Trump.

.@MichelleObama says "quarantine," the "racial strife" and the "hypocrisy" of the Trump Administration are "dispiriting," giving her "some form of low grade depression." The Obamas have good health, daughters in good schools, net worth $130mil, $12mil pad in Martha's Vineyard… pic.twitter.com/GxS6rzJc0Q

Michelle Obama revealed today that she is suffering from depression. Maybe it was the $80 million Netflix deal and the $25 million dollar book deal that pushed her over the edge. Or, maybe she’s faking it just to get off that Joe Biden possible VP list. #MAGA #KAG

And then there were others who offered their own sage advice, like Jenna Ellis, a Trump legal adviser who appeared on Fox News Thursday. “Conservatives tend to be more joyful and more happy overall with their lives because we still believe in the pillars of society, which is the church and the family,” she said. “So I would encourage Michelle Obama to go to church and find joy and meaning in the Lord Jesus Christ as her own personal savior.”

The breathtaking sanctimony at play here conveniently omits the fact that the former first lady has often credited her faith with helping sustain her in the White House. But that’s beside the point. It was typical of the conservative reception to Obama’s personal revelations: She was insulting, attention-seeking, a spoiled Democrat—a Black woman no less—who should shut up and pray.

They can point their outrage at a spoiled Democrat—a Black woman no less—who should shut up and pray.

Such attacks aren’t surprising. They’re from the same kind of people who have long hurled racist and downright absurd attacks against the Obamas. But they’re incredibly revealing about this current moment, as we stare down the barrel of what’s all but certain to be an even more depressing autumn marked by the approaching election, the flu, a chaotic patchwork of school reopening plans, and a disintegrating President Donald Trump. In a moment that only reinforces our sense of feeling powerless, the right has nothing of value to add, no effort of solidarity or empathy to offer. For them, Obama’s willingness to show vulnerability is an invitation to pummel, or as she might call it, go low, with the same recycled attacks.

Things are going to get worse before they get better—and that sense of doom you’re experiencing is likely here to stay, perhaps long after the coronavirus leaves. Their scorn for Obama is a reminder that they don’t care about your mental health, even when it feels like utter shit right now.