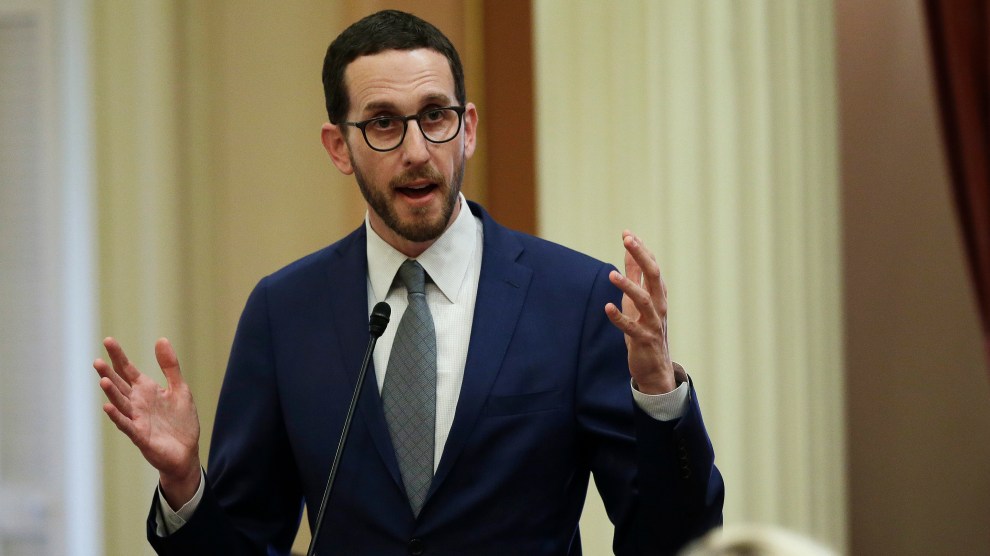 Scott Wiener is used to being targeted for his legislation. The California State Senator represents San Francisco, and has long championed the kind of progressive reforms that have attracted the ire of right-wing culture warriors and their online trolling.

Over the past few days, the harassment Sen. Wiener has endured has gotten much worse. QAnon troll accounts have sicced their rabid followers on him, latching on to a bill he’s introduced to reform California’s sex offender registry.

More people than ever are jumping on the QAnon bandwagon, and the conspiracy’s biggest influencers enjoy rapt audiences and ready troll armies.

LGBTQ advocates argue the situation unfairly penalizes people who do not engage in penile-vaginal intercourse, a problem that Sen. Wiener’s legislation aims to fix. But low-level conservative blogs have written up misleading and exaggerated stories about the legislation saying that it would protect pedophiles and falsely claiming that it would mean a 22-year-old found to have sexual contact with a 12-year-old would not be placed on the registry. The existing law does not automatically keep people off the registry. It only allows judges additional discretion in making such decisions, and it does not apply to anyone found to have had sexual contact with someone younger than 14. Wiener’s proposed legislation wouldn’t change anything regarding ages, but would allow judges to treat different sexual acts equally.

Since Friday, Weiner has received thousands of messages targeting him for the bill, according to Catie Stewart, his communications director. While some have come via email, most of the harassing messages are being sent through Instagram, both as private direct messages and as public-facing comments posted to his own Instagram account.

“It’s a noticeable uptick,” Sen. Wiener said in a phone interview, noting that about a month ago he had gone through a slightly less involved harassment campaign over the same legislation. “The comments are gross. There’s a ton of them. They’re much, much nastier than what I’ve received before.”

The private messages he shared are indeed gross. “You’re dead. Dead. Dead. Dead. I’ll publicly execute you. I’m gonna embarrass you. Pedophile,” wrote one Instagram user. “I’ll come cut your head off and deliver it to your mom if you even considering introducing your ‘bill.’ Got it?” another read.

Many others posted publicly on Instagram are a little milder but still libelous and often anti-Semitic. Users frequently accuse Sen. Wiener of being a “pedophile” and have lobbed other insults referencing his Jewish heritage.

Sen. Wiener said that he feels frustrated that Facebook, which owns Intsagram, is letting this happen.

“Social media platforms need to do a lot more to deal with toxicity that is so damaging to society. I know it’s hard. I get that they don’t want to be thought police. Not everything is clear cut, but some things are. What’s happening here is clear cut, when you have all these comments calling me a pedophile, when you have all these homophobic, anti-Semitic remarks,” Wiener said, adding that he feels like he’s at a disadvantage as it is illegal to block people on social media as a public official.

“Social media platforms need to do a lot more to deal with toxicity that is so damaging to society.”

A Facebook spokesperson declined to comment for attribution on the incident or the company’s response, citing their potential personal risk of QAnon harassment.

The specific sources inciting harassment against Sen. Wiener are mostly unclear, but the patterns and characteristics of the harassment indicate that it’s being driven by conspiracists, including supporters of QAnon, the sprawling theory that holds that a cabal of liberal elites has been running a massive pedophile ring that Donald Trump is working to take down.

One of the telltale signs of QAnon related harassment is a focus on child-trafficking and pedophilia—usually in the absence of any evidence. At least one account with over 50,000 followers that Sen. Wiener’s campaign identified as attacking his account is run by a woman who lists her name as Denise Marie, and regularly shares posts indicating she is an ardent supporter of Pizzagate and other QAnon-styled pedophile conspiracy theories, along with other conspiracy theories about the coronavirus and 5G.

One of her posts attacking Sen. Wiener has shown up in other smaller conspiracy-posting accounts’ stories, including accounts run by people backing QAnon. It’s likely that other well-followed QAnon accounts posted about Sen. Wiener as well, but the splintered, image-based structure of Instagram makes it hard to track how information flows across the platform.

Another potential source of harassment against Sen. Wiener is an article that appeared on a website called The California Globe, which purports to be a news site but posts conservative-slanted headlines like “Sacramento: Typical Of Poorly Run Blue-Mayor Cities.” A February 2019 article from the site with the headline “CA Democrats Author Bill To Protect Sex Offenders Who Lure Minors” has recently been making the rounds of right-wing Facebook pages and groups, according to CrowdTangle, a Facebook-owned social media analytics tool. Facebook pages like “Republicans Take Back California” and “Recall Gavin Newsome” started posting about it to their tens of thousands of followers towards the end of July. A QAnon Facebook group with almost 23,000 followers also posted about it on July 24, just about a week before QAnon supporters started targeting Sen. Wiener.

“Targeted harassment has been a core feature of QAnon almost since its inception.”

Another factor could be that more people than ever appear to be jumping on the QAnon bandwagon. Under the coronavirus, by every metric, there has been a marked increase in interest around QAnon. Twitter mentions of the conspiracy, Google searches related to it, and Wikipedia page views for QAnon topics have all seen massive spikes since mid-March when coronavirus lockdowns started in the U.S. And different types of people, using different tech platforms, are jumping in too. Wellness influencers and anti-vaxxers have glommed onto QAnon child trafficking conspiracies, giving it an even wider base. (Stewart said she had noticed many anti-vaxxers joining in the harassment against her boss.)

With more eyes on Q than ever before, the conspiracy’s biggest influencers enjoy a rapt audience and have a ready troll army to unleash on their enemies. Correspondingly, more and more people in the public eye and businesses have found themselves on the receiving end of QAnon harassment campaigns. The contemporary moral panic has recently incited waves of harassment against Oprah, the online furniture seller, Wayfair, and even Chrissy Teigen. Each has been baselessly accused of being wrapped up in different child trafficking schemes, and Teigen’s case falsely linked to Jeffery Epstein.

But QAnon’s history of doing these sorts of things stretches back further. Travis View, an independent conspiracy theory researcher who co-hosts the podcast QAnon Anyonymous, explained that while what Wiener is going through is extreme, “targeted harassment has been a core feature of QAnon almost since its inception.” View recalled 2018’s “Operation Mayflower,” in which Q followers regularly organized on Facebook to run coordinated harassment campaigns against perceived adversaries.

“A consequence of the fact that there are more QAnon followers than two years ago is the intensity of the targeted harassment is even greater now then back then,” View added.

Sen. Wiener thinks it’s a serious problem that the technology companies have given conspiracy theorists and anyone willing to abuse their platforms a weapon, particularly when it is targeted to influence democracy.

“Whether its QAnon or Russian troll farms, these are factories of false info designed to undermine democracy and public discourse. And also to send a message to elected officials that if you pursue unpopular progressive change to help marginalized groups like queer kids, ‘We’re going to target you,'” he said.