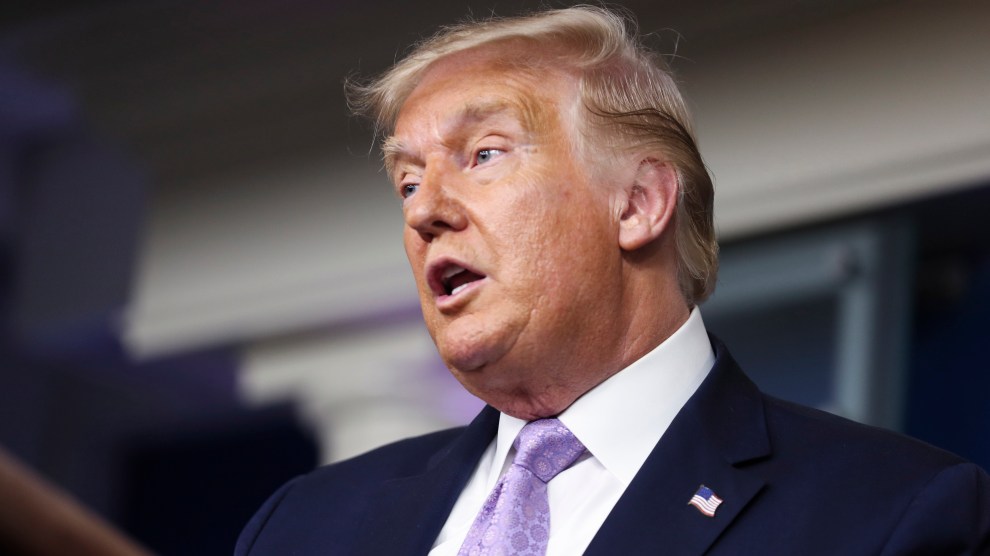 President Trump is back on his birtherism bullshit.

At his Thursday afternoon press conference, a reporter asked if he thought Sen. Kamala Harris met the legal requirements to run for vice president. “I heard today that she doesn’t meet the requirements,” Trump responded, adding that he’d look into it.

Holy shit. Trump pushes a baseless, birther-style theory about Kamala Harris that holds she's not a citizen because birthright citizenship isn't a thing.

"I just heard it today that she doesn't meet the requirements … I have no idea if that's right." pic.twitter.com/ZIXYrleuVf

Before we get into this, let’s be clear: Harris was born in Oakland, California.

But an opinion article in Newsweek written by the law professor John Eastman spurred the social media frenzy leading to this moment. In the article, Eastman uses discredited theories to suggest that Harris would be ineligible for the vice presidency because her parents were not naturalized citizens at the time of her birth.

Trump could have simply shot this down. Keep in mind that in 2008, when a woman at a campaign event called Barack Obama an “Arab”—a notion Trump helped spread— John McCain snatched the microphone from the woman’s hand and said, “No ma’am. He’s a decent family man, citizen, that I just happen to have disagreements with on fundamental issues, and that’s what this campaign is all about.”

But, Trump being Trump, the president opted to fan the conspiratorial flames.

“The lawyer that wrote that piece is a very highly qualified, very talented lawyer,” he began, never confirming the theory explicitly but not discounting it, either.

Eastman is not, in fact, the man Trump describes. As my colleague Pema Levy wrote in 2018, he is a member of a group of extreme theorists about citizenship:

Scholars on both sides of the aisle have pushed back against this idea. Garrett Epps, a liberal constitutional scholar, wrote in The Atlantic in July, “Erler’s work is, at best, scholarly malpractice. Anton’s reliance on this work is the constitutional equivalent of flat-earthism.” The congressional record, Epps argues, clearly shows that the members of Congress who wrote the 14th Amendment intended for it to include anyone born in the United States, with only narrow exceptions including the children of diplomats.

In Eastman’s hands, a faux nitpicking of legal theory provides a decoy for racism.

White supremacy is a belief system based on the idea that ppl of color, esp Black ppl, are fundamentally illegitimate as equal citizens or human beings.

Calling into question the citizenship of elected officials of color, esp when the answer is obvious, is one way it manifests.

The man who jumpstarted his political career by claiming President Obama was not born in the United States couldn’t resist. “You’re saying that she doesn’t qualify because she wasn’t born in this country?” Trump said.

“She was born in this country,” the reporter clarified, “but the claims say that her parents did not receive their permanent residence at that time.”

It’s not that hard to simply not engage in conspiracy theories—for anyone other than Trump.