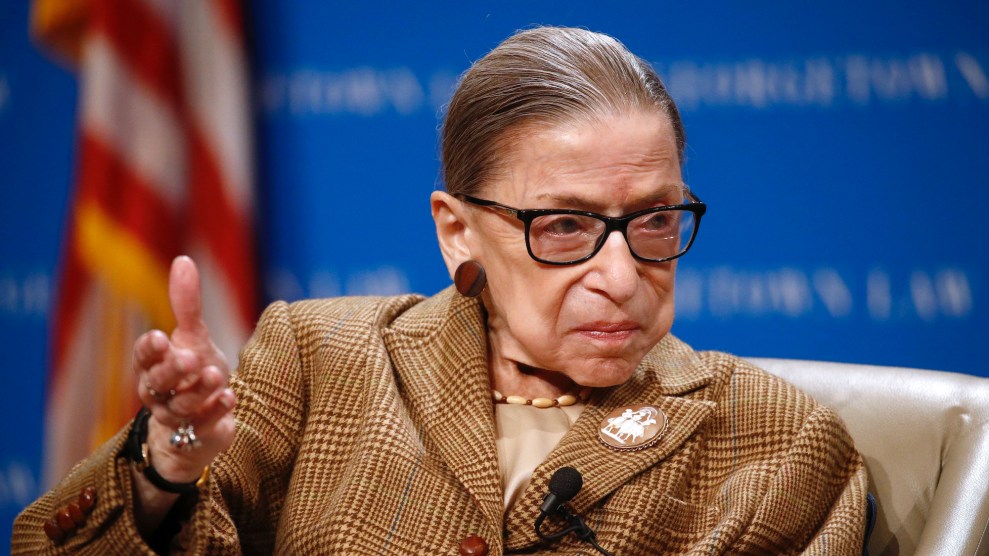 When news broke that Ruth Bader Ginsburg had died, the first instinct of many Democratic donors was to open their wallets—in the first hour after her death became public, Democratic fundraising outfit ActBlue said it raised $6.2 million, and the following hour $6.3 million. The blistering pace continued overnight and through Saturday afternoon had raised a total of $56 million.

NEW: ActBlue has taken in $56 million and counting for Democratic candidates and causes since Ginsburg’s death was announced last night. https://t.co/k9fmwRt8Ga

ActBlue raises money for campaigns and PACs, so it will be a while before it shakes out exactly which groups or candidates are benefitting from the surge in donor interest, but the Get Mitch or Die Trying, a campaign organized by the Pod Save America hosts, claimed it had raised $13 million through ActBlue by early afternoon on Saturday.

The group notably does not actually target Senate majority leader Mitch McConnell in his reelection bid against Democrat Amy McGrath, but rather sends money to 13 key races where Democrats have the best chance of flipping a seat.

For some context, in 2018, the average winning Senate campaign cost about $15.7 million, so $13 million in 18 hours is a tremendous haul for Senate Democrats.

While the money may not stop McConnell from pushing through a floor vote on a Trump nominee for the Senate before the election, that hasn’t stopped Democrats (and some Republicans) from quickly jumping on Ginsburg’s death as a fundraising opportunity. In fact, Republican Sen. Joni Ernst (Iowa), launched her first appeal even before Trump was informed of Ginsburg’s death.

“BREAKING: the future of the Supreme Court is on the line,” Joni Ernst’s campaign blasted out in a fundraising email about a half hour after RGB’s death was announced #IASenhttps://t.co/0POXARp5CH

Notably, all of this fundraising focuses on relatively small dollar amounts—campaigns and regular PACs are limited to donations of just $2,800. As the fight in the Senate develops over the next few weeks, a large part of the battle will be the television ad war, which will likely be funded by dark money groups, on both sides, who can rely on deep-pocketed donors who have no limits on how much they can give. Already, by Saturday morning, the sense that the fight would hinge largely on money was striking, with public statements over preparations for the fight sounding more like a high-stakes auction: Demand Justice, a progressive dark money group founded by a former Biden aide, pledged to spend $10 million to block any Trump nomination, and a spokesperson for Judicial Watch, a conservative dark money group, told the New York Times, “We will match their $10 million and whatever it takes.”