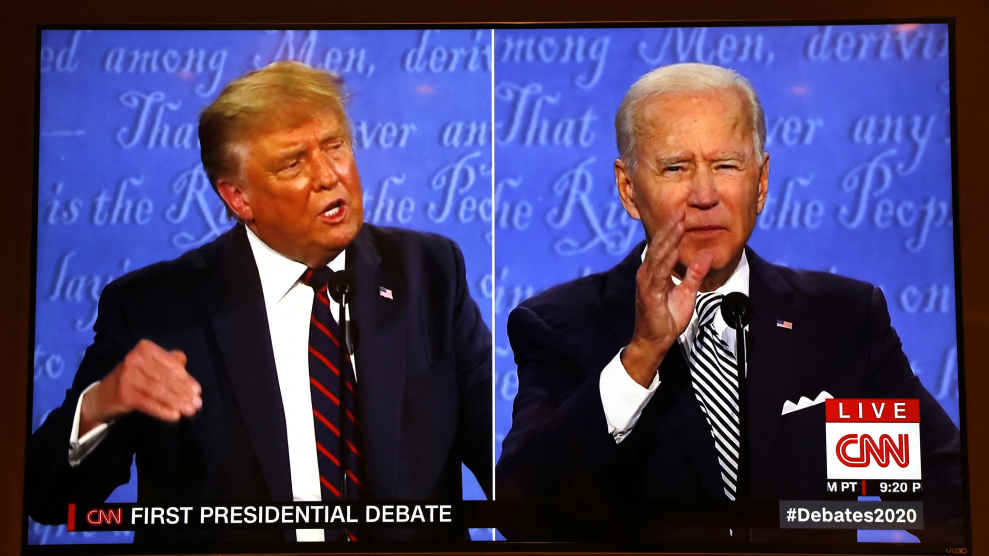 That’s what happened Tuesday night during the first presidential debate of 2020. Trump was focused on smearing his opponent, and Biden was trying to connect with voters. Throughout the evening, Trump kept his sneering look fixed upon Biden, as he heaped abuse on Biden (and Biden’s son, Hunter). Trump rarely addressed voters. It was as if he was only bent on creating content for Sean Hannity. Biden, in a stark comparison, often peered into the camera and attempted to speak directly with viewers. At one point, Biden, while responding to yet another Trump assault on Hunter Biden, brought the debate straight to those watching: “This is not about my family or his family. It’s about your family.”

It was clear that the two men viewed their tasks rather differently. Trump’s goal was to bully and soil Biden. He constantly interrupted and talked over Biden, insulting him as much as he could (“there’s nothing smart about you, Joe”) and practically turning moderator Chris Wallace, the Fox News host, into road kill. He acted like a pathetic narcissist: Biden is the threat to his existence, destroying Biden is his only priority. He could not imagine a strategy beyond a DEFCON-1 personal attack. Reaching voters who were not already die-hard Trump devotees was not on his to-do list. Trump doesn’t give a damn about that. He only cares about the Fox-watching cultists who are already in his pocket.

The Trump campaign obviously needs to expand his vote count beyond FoxWorld. He needs some of those suburban “housewives” he has been trying to scare with his racist demagoguery. But many of those voters are not with Trump or have left him because of his divisiveness, his lack of decency, and his penchant for chaos. Trump’s historic (in not a good way) performance is likely to alienate these folks further. He did absolutely nothing to change minds, to persuade, to coax, to win over. And that set up one of Biden’s best lines of the night, when the former veep slammed Trump’s callous remark about the COVID-19 deaths and said to him, “‘It is what it is’ because you are who you are.” This was Biden’s main attack on Trump; he’s a self-obsessed jerk who cannot act as a responsible adult during a national crisis. At the debate, Trump proved him right.

But Biden did all he could to pull out of the black hole created by Trump’s cray-cray. He often refrained from taking the bait. And when he could, he tried to escape the vortex and tell voters what he would do to help them. On health care. The economy. Climate change. Systemic racism. Sure, he got in his licks against Trump, calling him a “clown” and a “racist”—telling Trump to “shush” and “shut up,” as Trump repeatedly violated the debate rules he had agreed to. But Biden saw his primary objective as selling himself as a normal, caring guy who would go to work for you. He was aiming to appeal to voters, especially those not decided. He is an old-fashioned pol who does believe that trope that success in politics is about addition—adding voters to your coalition.

More than once, Biden sought to forge a heartfelt bond with voters. “Millionaires and billionaires” like Trump have done very well during the pandemic, he said. “But you folks at home…how well are you doing?” In another moment, he spoke empathetically to those Americans who have lost loved ones during the pandemic and shared their pain. Trump not once referred to the devastating losses caused by the pandemic.

Trump was given plenty of chances to act…well, like not an asshole. When asked to condemn white supremacists and right-wing militias, he could not do it. “Stand back and stand by,” he eventually muttered. That was no ringing denouncement. (One of these groups, the Proud Boys, immediately adopted Trump’s words as its new slogan.) Trump demonstrated that he is a human being without an iota of grace when he refused to acknowledge Beau Biden’s military service and his tragic death. Asked about racial inequity, Trump ranted about the support he gets from cops.

With this horrible performance—full of lies and bluster—Trump reaffirmed that he doesn’t give a damn about norms and that all that matters for him is the turmoil that he can create. He encouraged his followers to flood into voting places (to challenge voting they deem unfair), and he signaled he would contest results that don’t favor him. That is, he vowed to instigate more chaos. It is tough to see all this as a productive course for Trump. He is throwing red meat to his loyal carnivores, and his chops-lickers will relish the raw flesh. But others will view this meal as a disgusting mess and ask, “Do we really want four more years of this?” (Side note: Any commentary about how awful these 90 minutes were is incomplete if it doesn’t pin all the blame on Trump.)

In the end, though, this debate was a success. It provided voters accurate impressions of these two men. Trump was about as Trumpy as he could be. He did not take responsibility for a pandemic response that has led to tens of thousands of preventable deaths. He could not rise above his egotistical pettiness and brutal psychopathy. Yet again, he proved he has no capacity to heal or help a nation experiencing a horrific plague and other crises. Though Biden stumbled through some answers and muffed a few opportunities to lay Trump low, he came across as a competent fellow who  generally wanted to talk about issues in a productive manner. Nothing too exciting. Nothing too wild. But if Biden is correct, if the election this year is about the soul of the nation, then this debate highlighted that the choice is a damn clear one between a conventional, normy soul and one that is dark and ugly. And that’s a win for Biden.