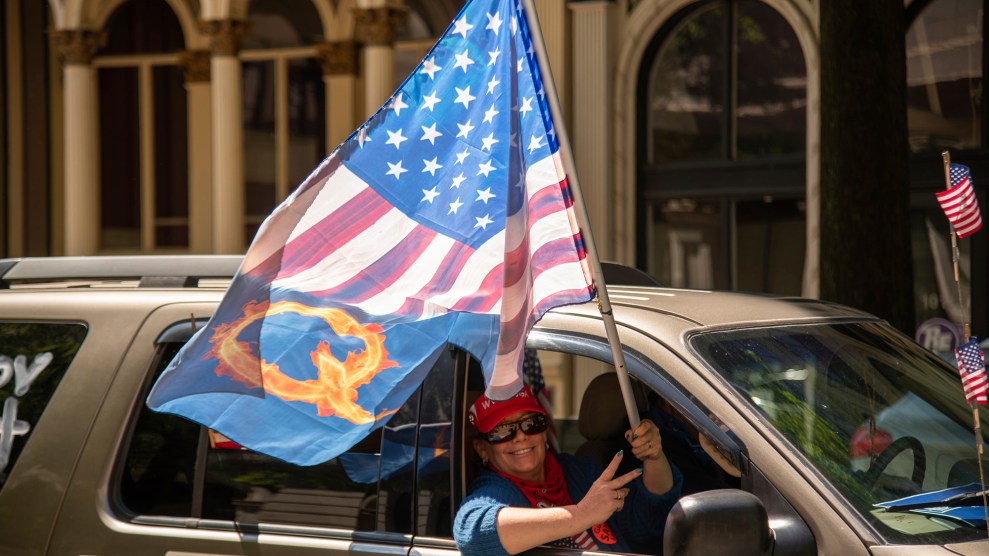 Since she retired last year, my mom has spent a good deal of her free time knocking on doors and making phone calls for political candidates. During the pandemic, she’s turned to text-banking as a way to stay involved politically at a time when social distancing and travel restrictions have made it difficult to canvass in person. But when she started sending texts last month on behalf of Democratic presidential nominee Joe Biden, the responses she got back from the occasional Trump voters on her list surprised her.

“They immediately start calling Biden a pedophile,” she told me. “I send out 500 texts in a pop and maybe it’ll come up five to seven times.”

When you consider that not every text is going to yield a reply and only a fraction of the recipients are Trump voters, that’s a pretty high response rate. Sometimes, the Trump supporters go into “really filthy detail about what kinds of things he’s doing or likes to do,” she added, though she never takes the bait and engages.

It is always disconcerting to hear that complete strangers are (digitally) shouting at your mom about pedophilia. But it turns out this is happening to many Biden text-bankers.

“I have been doing a lot of text banking and the number of people who think Biden is a pedophile is astounding,” one volunteer tweeted last week.

Another volunteer in Pennsylvania ranked it as the second most common response from Trump voters in her text-banking conversations.

What on Earth is going on? This smear appears to be an outgrowth of several years of right-wing disinformation and conspiracy-mongering. During the 2016 election, proponents of the “Pizzagate” conspiracy, including Trump’s disgraced first National Security Adviser Michael Flynn, came to believe—or pretended to believe—that prominent Democrats were involved in a child sex-trafficking ring located in the basement of a pizza parlor in Northwest Washington, DC. (They were not.)

In the Trump era, Pizzagate was superseded by QAnon, an almost-too-absurd-to-explain mind-warp of a conspiracy which, in the words of my colleague Ali Breland, “postulates that President Donald Trump is on the verge of arresting a throng of liberal elites for facilitating and participating in a sprawling child sex ring.” (He is not.)

Biden, meanwhile, has been the subject of his own form of disinformation on the subject. Even before Q became a fixture on t-shirts at Trump rallies and an article of faith among some Trump-backed candidates for Congress, the “Creepy Joe” meme, in which clips of Biden interacting with women and children are mashed together to suggest inappropriate or lascivious behavior, began circulating in right-wing circles. A YouTube video titled “Creepy Joe Biden Hair Sniffing Compilation” has nearly a million views. Over time, the implication of these images has gone from not respecting personal space—a charge for which Biden apologized—to, in the words of a meme shared by Donald Trump Jr. in May, that the Democrat is a “pedophile.” (Junior later said he was joking. LOL?)

The purveyors of Biden memes and conspiracy theories are not necessarily Q believers (though there’s certainly some overlap). But they end up in a similar place, often with the sanction of influential figures on the right. These Trump diehards reflexively view the president’s political opponents as not just ideological opposites, but as enablers of something far more sinister. Woe unto the poor Biden text-banker who encounters them.

Bradd Silver, a Biden volunteer from California, recalled a recent text exchange with a voter who told him that “Biden never goes by a young girl without smelling her hair or touching her on the back.”

After we spoke, Silver checked the Slack channel he’s in for Biden text-bankers to see if this had happened to anyone else. “Looks like 72 or so texters reported getting replies about Joe being a pedophile,” he wrote to me.

Another volunteer I spoke with, who said she gets at least one pedophile comment during every text-banking shift, sent along a smattering of screenshots of responses her fellow volunteers had received. One voter said, “I personally believe that pedophiles should be fed feet first in to a woodchipper.” Another said that they could not support a candidate who would “associate with know [sic] pedophiles while being accused by the public to be a pedophile.”

“I’d rather catch COVID-19 then [sic] vote for that pedophile…Trump 2020 bitch,” responded yet another.

Election season is a heated time and canvassers learn to deal with plenty of abuse (and a whole lot of rejection). But the pedophile attack is something different, at once something old and very new. As Ali wrote last summer, pedophilia has been the grist for conservative conspiracies for decades—an “outgrowth of the normal workings of reactionary politics,” part of the language of resistance to social change. What’s new is the extent to which it has been normalized in the context of the campaign, including at the highest levels.

What started on message boards is now hard to escape in real life. It’s winning primaries and permeating the president’s own campaign. Marjorie Taylor Greene, a near lock to win an open congressional seat in Georgia, has said that Trump is fighting a “global cabal of Satan-worshiping pedophiles.” Another Q acolyte, Lauren Boebert of Colorado, unseated a five-term incumbent Republican congressman in a primary in June. She, too, is a favorite to win a congressional seat.

A recent survey by Daily Kos and Civiqs found that 33 percent of Republican voters agreed that “the QAnon theory about a conspiracy among deep state elites is true”—a broadly worded and perhaps leading question that nonetheless suggests that the theory has moved out of the shadows. When Crooked Media and Change Research asked undecided and infrequent voters for a one-word description of Biden, 46 different people said “pedophile.” A New York Times story last week noted the surge in interest in the conspiracy among white women. “Nobody is appropriately gauging how quickly QAnon (and Q by other names) has taken over among suburban and rural white women,” observed NBC News reporter Ben Collins recently. “It is everywhere.”

“I heard these are people that love our country,” the president said in August of QAnon supporters. By Tuesday, with 49 days to go until Election Day, he himself was sharing the pedophile meme, promoting a tweet with the hastag “#PedoBiden,” next to a .gif of Biden whispering in a woman’s ear. (That woman, Stephanie Carter, the wife of former defense secretary Ash Carter, has in fact written an entire Medium post about the harassment she’s faced from Biden critics over an image that was “misleadingly extracted from what was a longer moment between close friends.”)

It’s not just Trump supporters who are now dishing out these gross and debunked tropes. The disinformation is coming from the campaign itself.