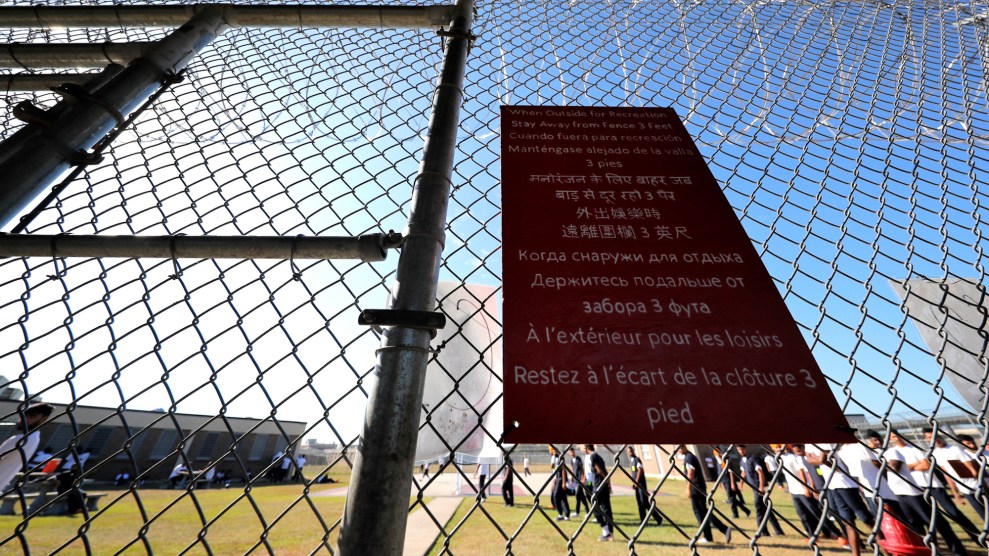 A fence at the Winn Correctional Center, a for-profit immigration detention center in Louisiana run by LaSalle Corrections.Gerald Herbert/AP

Hurricane Laura’s trail of destruction left several immigration detention centers in Louisiana without power or water, creating such dire conditions at one facility that detainees reported relieving themselves on their dishes, covering up their waste with torn-up pieces of plastic bags to control odors, and sleeping near toilets filled with feces and menstrual blood.

After the Jackson Parish Correctional Center lost power and water last Thursday, temperatures soared without air conditioning and people spent days without working bathrooms, according to six people detained there by Immigration and Customs Enforcement. The detainees said on Monday that the toilets still weren’t working and that guards let them sleep outside on Friday because the heat inside was unbearable.

On Saturday, the detainees protested, leading to a disturbance that prompted officers to use force against detainees, according to Jackson Parish Sheriff Andy Brown. “The show of force and the less lethal tools we used squashed this event,” Brown wrote on Facebook. He said water and power had been restored to the facility.

Starting last year, Immigration and Customs Enforcement started sending asylum seekers to eight additional for-profit jails and prisons in the Deep South. Even before Laura struck, detention was hard to endure for the immigrants and asylum seekers being held there. ICE denied nearly all of their applications to be released on parole. Then COVID-19 began to spread through the facilities, but again ICE declined most requests for release. Now people at several of those detention centers are dealing with the fallout from a Category 4 hurricane.

Despite Brown’s Facebook post and reporting from the Associated Press and New Orleans Public Radio on the protest, Scott Sutterfield, an executive with LaSalle Corrections, which runs the Jackson Parish facility, said “there was no use of force reported at the facility.” ICE spokesman Bryan Cox did not provide details about the use of force. Brown did not respond to multiple requests for comment.

Cox did say on Monday that power was back on at Jackson Parish and that water was being pumped in via a tanker. He added that “due to extensive planning and preparation, backup systems were promptly put into use and precluded any extended absence of power or potable water at ICE facilities.” Sutterfield’s response included the same wording. But four detainees said Monday that they still couldn’t use the toilets in their units. (Cox did not respond to a follow-up question about reports that the bathrooms remained out of service.)

A Cameroonian asylum seeker who asked to remain anonymous told me that feces and blood from women’s menstrual cycles had accumulated in the toilets. “We cannot sleep because the whole dorm is smelly,” she said. “We eat in this smell.”

The Cameroonian detainee added that another woman in the unit went to the infirmary over the weekend with a fever. “They took her back to the dorm,” said another Cameroonian woman in the unit. “She stayed with us for the whole day.” The two Cameroonian women said their unit is now being quarantined from the rest of the jail. They reported that guards only sometimes wear masks. (LaSalle Corrections previously barred some employees from wearing masks to prevent detainees from panicking about COVID-19.)

A Cameroonian said feces and blood from women’s menstrual cycles accumulated in the toilets. “We cannot sleep because the whole dorm is smelly.”

A Cuban man at Jackson said detainees were relieving themselves on the disposable dishes food is delivered on. To keep the odor at bay, he and other men in the unit described covering their waste with torn up pieces of plastic bags before putting it in a trash can. Immigration lawyer Dario Elizondo said a Honduran client of his in a third unit told him that feces was overflowing from a toilet.

Elizondo’s client said he was being quarantined with dozens of people who, like the client, had recently tested positive for COVID-19. ICE lists only nine active coronavirus cases at Jackson on its website, although the agency’s public data is often several days out of date. (Cox did not respond to a question about whether there had recently been a spike in cases at the facility.)

Three women detained about an hour away at an immigration detention center in Jena, Louisiana, run by the private prison company GEO Group, said Monday that they had running water but not light or air conditioning. Kerlys, a Colombian woman who was part of a group that got pepper-sprayed by guards in April during a confrontation over COVID protections, said the heat was suffocating. María García, a 63-year-old from Mexico whose age makes her more vulnerable to COVID at the jail, described similar conditions.

Jorge Sarat, a Guatemalan man detained at another LaSalle detention center in Louisiana, said on Tuesday that his facility didn’t have electricity or running water for three nights. It was so hot that the detainees couldn’t sleep, he added. “It was horrible,” Sarat said. “I thought we were going to die.”