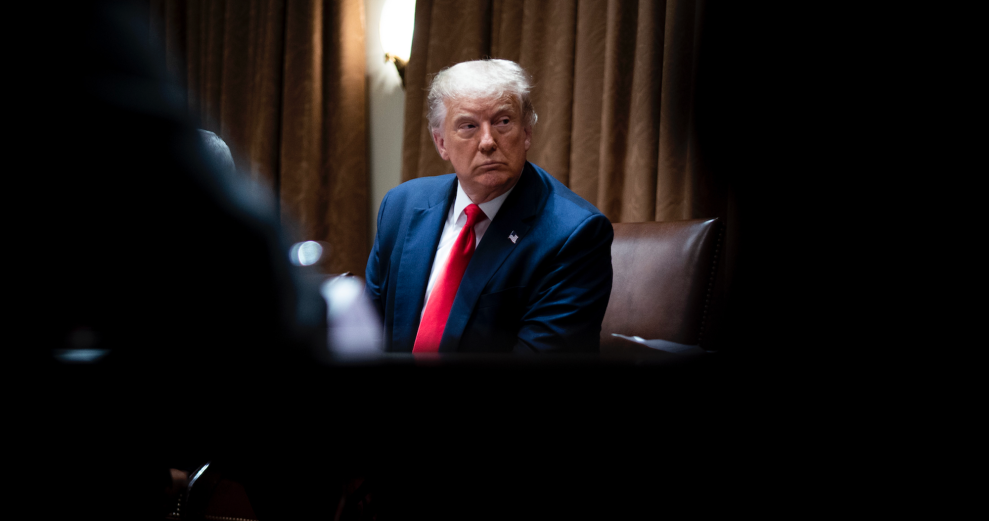 In her forthcoming memoir, Speaking for Myself: Faith, Freedom, and the Fight of Our Lives Inside the Trump White House, former White House press secretary Sarah Huckabee Sanders shares a surreal moment. President Trump, upon catching the North Korean dictator Kim Jong-Un flashing a flirtatious wink at Sanders during the 2018 summit between the two countries, jokingly instructed her to “take one for the team.”

“Kim Jong Un hit on you! He did!” Sanders quotes the president exclaiming. “He fucking hit on you!”

“Well, Sarah, that settles it. You’re going to North Korea and taking one for the team! Your husband and kids will miss you, but you’ll be a hero to your country!”

The episode is among a string of revelations in the latest insider account from an ever-expanding cast of characters, who after enjoying prominent roles in serving the president, have turned their access into becoming best-selling authors. They include the former FBI director James Comey, former National Security Adviser John Bolton, former White House Chief of Staff John Kelly, and Omarosa Manigault-Newman, the former “Apprentice” contestant who parlayed her reality-star roots into a brief yet highly tumultuous career as a White House political aide.

A relatively new phenomenon in the annals of presidential administrations, so-called Trump books are consistent commercial triumphs, and it’s unsurprising that publishers are keen to keep riding the wave. “However you feel about the president in political terms or existential terms for what he might do for or to the country, he makes great copy,” Eamon Dolan, an executive editor of Simon & Schuster, told the New York Times. But when the subject is Trump, a man who often appears physically incapable of exercising any restraint, the insatiable appetite hits strangely. After all, what more can be evinced from insider accounts about a man who doesn’t keep anything close to the chest, whose horrifying nature is routinely up for public consumption anyway? The appeal reflects a deeper emptiness among an audience hyper-vigilant to the unprecedented nature of these times but who apparently depend on these books for further saturation. Sure, such accounts might make for a good headline, but is a perverse boredom behind their overwhelming popularity? Why not just surrender to an almost-algorithmic release of artless literary offerings to choose what you do with your spare time?

Consider this week’s winking anecdote. Sanders’ account from the 2018 summit generated a slew of headlines, as well as remarks on social media over Trump’s oafish behavior. But while cringe-inducing, the revelation was still shockingly staid for a man who stands accused of sexual misconduct by dozens of women. The frat boy call to “take one for the team,” while wholly inappropriate, is a mild version of the 2005 recording that captured Trump bragging about groping women without their consent. But for Sanders, who is reportedly contemplating a run for Arkansas governor, it was the perfect attention-grabbing nugget: salaciously wrapped to create a splash, yet yawn-inducing enough to avoid Trump’s vengeance. (In fact, he probably reveled in the disclosure.) A book like this with an anecdote like that is merely a self-serving mechanism for a woman who’s all in for Trump, and voracious readers are happy to literally buy into the project. Meanwhile, the sexual assault allegations feel increasingly like an addendum pushed to the margins of the Trump discourse.

Then there’s the tell-all about Melania Trump, written by a former friend and former “trusted adviser” to the first lady, Stephanie Winston Wolkoff. Here, the attraction to Winston Wolkoff’s book is easy to grasp; It pries open the first lady’s notoriously tight-lipped efforts to seal her private life from the public. Does Melania truly desire to be freed, is often the reigning question, and perhaps Winston Wolkoff’s insider account will provide enough clues to reach a conclusion. While I suppose it’s good fodder for gossip, I can’t help but question what kind of person is spending money to find out. Like her husband’s rampant sexism, the answer seems pretty clear, even without a former confidante’s participation and subsequent writing about such palace intrigue.

The desire to wring sense out of these chaotic times is near-universal. But books by former Trump officials—some of them unreliable narrators with a prolific record of lies, others attempting self-rehabilitation—hawking insider knowledge just don’t feel like the answer. Of course, not everyone reads for the same purpose; you might enjoy this chaos. But for those seeking some respite, may I recommend, Luster, by Raven Leilani?