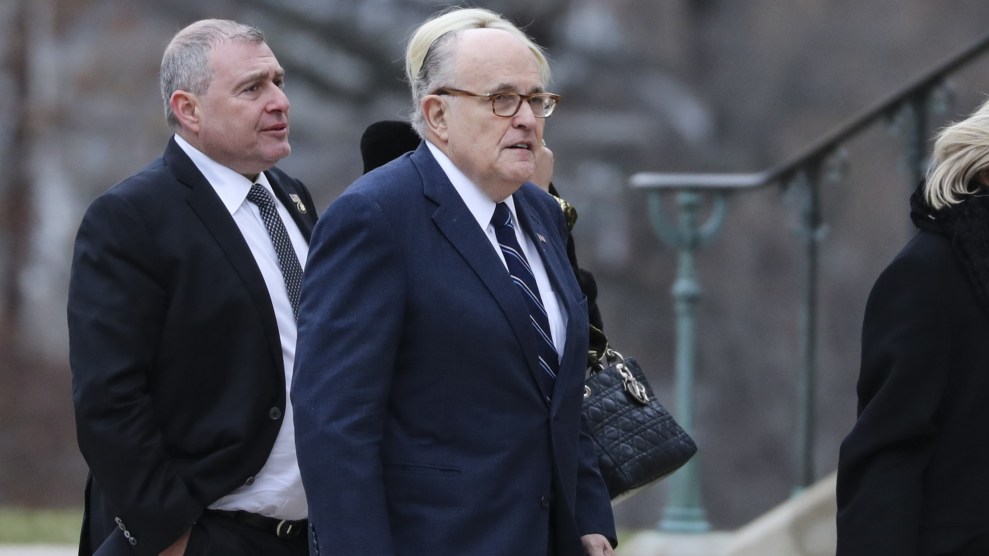 On Thursday, prosecutors in New York leveled new charges against Lev Parnas, who played a central role in helping Giuliani’s attempt to push Ukrainian officials to boost phony charges against former Vice President Joe Biden. In an indictment against Parnas and his business partner David Correia, prosecutors assert that starting in 2012 the pair solicited investments in a company called Fraud Guarantee, which they claimed would protect consumers. But the business was never launched. Instead the men used the investments for personal expenses, while lying to investors about the business, the indictment says.

“The funds were largely withdrawn as cash, transferred to accounts in the name of Parnas or Correia or their family members, or spent on various apparently personal expenditures, including hundreds of thousands of dollars in rent for Parnas’ personal residence and tens of thousands of dollars at luxury car leasing companies” and on “political donations,” prosecutors said in a press release Thursday.

Last year, Parnas, Correia, and two other colleagues were charged with campaign finance violations, mostly unrelated to the Ukraine scheme. On Thursday, prosecutors also added new campaign finance charges to that full group. Parnas’ lawyer, Joseph Bondy, said Thursday that the new superseding indictment “contained no surprises” and that Parnas is pleased the case, scheduled to go to trial in February, is moving forward.

According to the New York Times, in 2018 Parnas and Correia agreed to pay Giuliani’s consulting firm $500,000 in exchange for his public endorsement of Fraud Guarantee. The men had hoped to replicate Giuliani’s work as a pitchman for LifeLock, an identity theft protection company. (Giuliani has disputed this characterization, claiming he provided legal services to Fraud Guarantee, though he has not specified what he did.) After struggling to come up with that payment, Parnas and Correia reportedly persuaded Charles Gucciardo, a Long Island lawyer and Trump backer, to pay Giuliani directly in what they told Gucciardo was an investment in Fraud Guarantee.

The indictment includes an apparent oblique reference to this transaction, describing an unnamed fraud victim “who invested a total of approximately $500,000 in Fraud Guarantee by transmitting the funds to an account held by a consulting firm” that Parnas and Correia “had retained.”

Robert Costello, a lawyer representing Giuliani, said it is unclear if this was the payment Guiliani received. “We have no way of knowing what the reference means,” Costello said in an email Thursday. “Mayor Giuliani did not do anything improper or illegal. There is no reference to Mayor Giuliani or any of his associated companies. We have no reason to suspect that the SDNY is investigating Mayor Giuliani for anything.”

An attorney for Gucciardo did not respond to a requests for comment.

The same federal prosecutors who brought the new charges against Parnas and Correia have also investigated whether Giuliani illegally lobbied the Trump administration on behalf of a former Ukrainian prosecutor, according to several reports. On Thursday, prosecutors said in a footnote in a letter to the judge in the Parnas and Correia case that he had agreed to keep some information secret because of “an ongoing investigation.”

Costello and Giuliani have questioned if prosecutors are really looking into the former mayor. “I don’t know that there was ever a Rudy Giuliani investigation,” Costello told the Times.