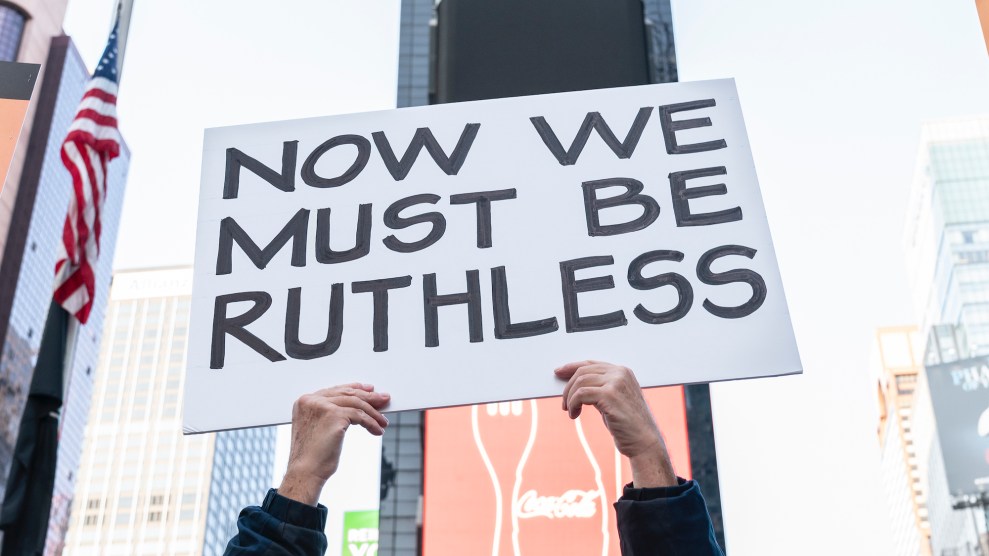 Almost two years ago to the day, Ana Maria Archila wedged herself between the doors of an elevator in the bowels of the US Senate’s serpentine basement corridors and forced Sen. Jeff Flake (R-Ariz.) to listen as she detailed her sexual assault experience and criticism of his support for Brett Kavanaugh’s confirmation to the Supreme Court. CNN captured her upbraiding on camera, and the encounter went viral—a series of events after which Flake called for an additional FBI investigation into the sexual assault allegations made against Kavanaugh.

Archila had spent two decades as an organizer, first on behalf of immigration rights and now as the co-executive director of the Center for Popular Democracy, a New York-based progressive advocacy group. But her encounter with Flake marked the first time she and CPD had mobilized around a Supreme Court nomination. The group hadn’t gotten involved when President Donald Trump nominated Justice Neil Gorsuch to the court, Archila explains, channeling its energies instead to mass disruptions to defend the Affordable Care Act against the GOP-held Congress’ efforts to dismantle it. But in April 2018, Texas and 19 other states filed a lawsuit that threatened to undermine the constitutionality of the ACA—a lawsuit that would be settled by the Supreme Court. “We came to protect our health care, save our families from deportation, and protect our right to abortion,” Archila says of CPD’s decision to engage in the Kavanaugh fight.

Over the last few months, CPD has teamed up with Demand Justice, a liberal group focused on judicial advocacy and reform, to hold a series of webinars about how a Supreme Court stacked with GOP appointees could railroad a progressive agenda. As part of the series, Archila hosted a conversation with lawyers, policy experts, and young immigrants who were plaintiffs on the DACA case before the Supreme Court last term. It was the “first time people were talking about the centrality of the Supreme Court to immigrant youth,” Archila explains. “Laying down the groundwork for embracing the fight around the [Supreme] Court is really important.”

And in the wake of Justice Ruth Bader Ginsburg’s passing, progressives are ready to capitalize on those education efforts as they embark on a mass mobilization effort to stop the Senate from confirming Trump’s third Supreme Court nominee.

The story of Kavanaugh as a galvanizing force is a one repeated across the progressive movement. The Working Families Party had focused each of its state-based organizations to electing candidates at local, state, and federal levels who would champion a progressive agenda. Indivisible had trained its more than 1 million members on congressional advocacy, touching upon the judiciary only in the context of House Democrats’ landmark democracy reform bill. Nevertheless, both mobilized during the Kavanaugh confirmation—an effort that relied on a fair degree of “spontaneity,” Maurice Mitchell, the national director of the Working Families Party, tells me. “In the past, progressives have treated these court fights as insider battles among the larger, DC-based legal institutions,” he explained. “This felt very different—it was a resistance moment.”

“When RBG passed, we had already been building a muscle, and activists were ready to go.”

It’s been the right’s base, not the left’s, that’s trained its electoral and activism focus on court appointments. “On our side, there hasn’t been that level of clear political education,” Mitchell says, but the Trump presidency has been “a crash course in our courts.” Though decisions the 5-4 conservative majority made this term on abortion, indigenous rights, and LBGTQ rights steered clear of liberals’ worst fears, much of the Democratic agenda still rests in its hands: A case on the constitutionality of the ACA, for example, will appear before the Supreme Court just a week after Election Day.

With Kavanaugh’s confirmation just before the House-flipping 2018 midterms and the 2020 Democratic presidential primary, groups like Demand Justice stepped in to formalize progressives’ education. It took the lead in pressing both progressive voters and the candidates to focus on the Supreme Court as an electoral issue. In February, Demand Justice teamed up with reproductive rights groups NARAL Pro-Choice and the Center for Reproductive Rights for the first-ever presidential forum focused exclusively on the federal judiciary. (Every Democratic candidate besides Joe Biden included a plan for the Supreme Court or federal courts as part of their policy platforms, according to a Buzzfeed News analysis from last September.)

In the spring, Demand Justice conducted focus groups and polling that found concern among progressive and moderate voters over Trump’s appointments to the Supreme Court and a perception that it had become too politicized under him. That prompted the group to launch the Supreme Court Voter project to inform liberals about how the Supreme Court interacts with issues near and dear to them. So far, the project has trained 600 activists on the history of the right’s focus on court appointments and how the rulings from the Roberts Court have railroaded the progressive agenda. The end goal is to have Supreme Court “evangelists” who are equipped to energize their fellow progressives on the issue, says Tamara Brummer, a senior advisor and director of outreach and engagement with Demand Justice. “When RBG passed, we had already been building a muscle, and activists were ready to go,” Brummer says. “We’re not having to tell folks ‘this is something you need to do.’”

Demand Justice, which has vowed to spend $10 million on the cause, is continuing with trainings and organizing events to mobilize against Trump’s nominee, who he says he’ll announce at the end of the week. The group teamed up with Center for Popular Democracy, Working Families Party, and five other progressive groups to host an organizing call with Democratic senators on Sunday evening to encourage supporters to ramp up both electoral outreach and pressure GOP senators to not support a confirmation before Inauguration Day. The day after Ginsburg’s death, Indivisible volunteers flooded voters with half a million phone calls and text messages, breaking the group’s single-day record for voter contact attempt. Progressives’ willingness to donate their time had been matched by those willing to open their wallets: On Friday night, donors shattered fundraising records on ActBlue, a liberal donation processing site, as they rushed to support Democratic candidates and causes, giving at a rate that topped $100,000 per minute in the hours immediately following Ginsburg’s death.

Indivisible co-founder Leah Greenberg says the outpouring is “a culmination of several trends,” an education in the Supreme Court’s importance being just one of them. With only six weeks before Election Day, volunteers had already been thinking about electoral implications—unlike 2018, the Senate map is much more favorable to Democrats, and concerns that progressives wouldn’t mobilize around Joe Biden proved to be shortsighted. The passing of a liberal icon like Ginsburg, too, is its own motivating force. “People who were thinking, ‘I want to pick up the phone bank here and there’ are now saying ‘I want to phone bank as much as possible,’” says Emily Phelps, Indivisible’s communications director.