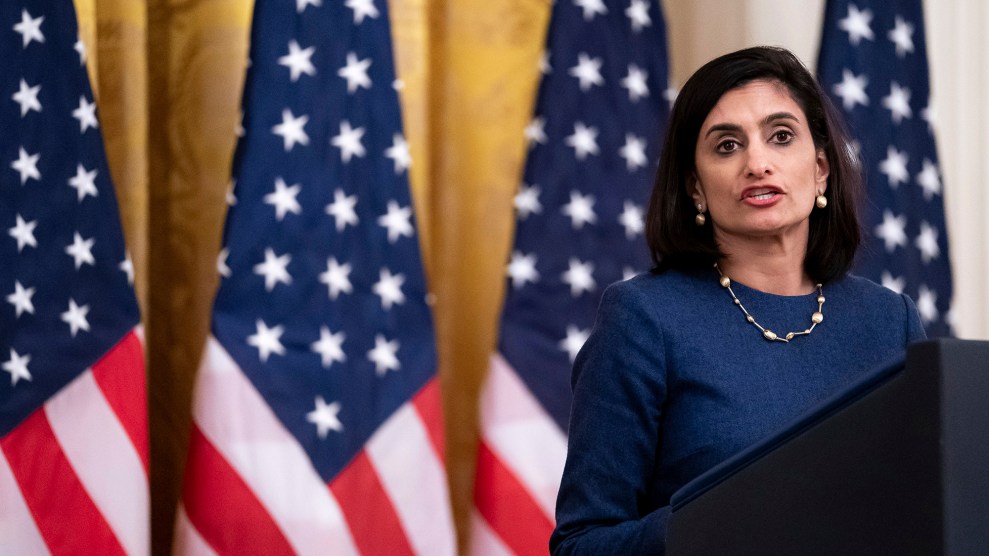 Seema Verma, administrator of the Centers for Medicare and Medicaid Services, speaks at a White House event on protecting seniors on April 30, 2020. Tia Dufour/White House/Planet Pix via ZUMA

Last week, Congressional Democrats revealed that a senior Trump administration official had spent more than $3 million of taxpayer money on highly-paid Republican consultants to bolster her public image. Seema Verma, who heads the Centers for Medicare and Medicaid Services, surrounded herself with an entourage of fixers to help sell her policies, write her speeches, and package her persona. And the team, by exploiting loopholes in today’s mass-consumption feminism, specifically set out to build her a reputation as a badass woman.

The scandal is pretty typical for the Trump administration, which has filled its ranks with officials who have acted as if the public coffer was a piggy bank for their own personal benefit. Examples range from the president’s own use of taxpayer dollars at his own properties to, inside his cabinet, flights on private jets, a $31,000 dining set, and a custom-built phone booth, among many others.

The women of the Trump administration “have benefited from the pop-feminist reflex of honoring women for achieving visibility and power, no matter how they did so.”

But Verma’s wielding of modern feminism sets her apart, and offers a clear demonstration of how Republicans have learned to promote GOP women who are also stabbing women in the back with their policies—and of how thoroughly they have succeeded.

Some ten thousand pages of documents obtained by congressional investigators show that one of Verma’s top image-makers was Pamela Stevens, a longtime GOP communications consultant who specializes in getting Republican women favorable coverage in women’s magazines and blogs. Stevens had a lot of ideas for how to penetrate the world of for-profit feminism, according to the records, proposing meetings with magazine editors from Woman’s Day, Women’s Health, and Glamour, along with representatives of People, the brand Girlboss, and the female-empowerment themed Maker’s Conference. She wanted to put Verma in touch with a Washington Post reporter who she indicated “writes a lot on Women” and suggested Verma attend the Glamour “Woman of the Year” awards event and hob nob with its editor-in-chief. Stevens collected $3,400 from taxpayers for arranging Verma’s appearance on Politico’s “Women Rule” podcast.

In the fall of 2018, Stevens organized a “Girl’s Night,” the records obtained by Congress show, in Verma’s honor at the home of USA Today journalist Susan Page. Stevens described the event as a networking opportunity for Verma, and invited media personalities and other prominent women. Taxpayers paid Stevens nearly $3,000 to organize it. Page, the host, says she was unaware of the consultant fees. She also spent $4,000 of her own money on catering the event, which, a USA Today spokesperson told Politico, was intended “to honor women on both sides of the aisle doing notable things,” describing the event as “well within the ethical standards that our journalists are expected to uphold.”

Ethically, though, hosting the event is a bad look for Page—who was just selected to moderate the vice presidential debate next month between Mike Pence and Kamala Harris—for journalism, and for women. While “Honoring women doing notable things,” is the phrase the Page-defending spokesperson deployed to explain the event, the word “notable” does a lot of work and is worth a second look. It confers status without signaling whether Verma should be praised or condemned, whether her work is doing good things or bad things. It bestows praise on women doing anything prominent even when, in Verma’s case, that work is objectively bad for women.

As the head of CMS, Verma has spent nearly four years trying to kick people off of Medicaid. A majority of Medicaid beneficiaries are women. Women rely on Medicaid for family planning, maternity care, and long-term care. Verma’s enthusiasm for eliminating the Affordable Care Act and, when that effort failed, limiting Medicaid access for the unemployed, are policies that disproportionately hurt women. But you can’t deny they are notable.

Stevens and Verma were taking advantage of a kind of modern, capitalist feminism in which individual womens’ successes are rebranded as feminist triumphs, regardless of what they are. Girlboss, one of the brands Stevens suggested Verma connect with, encapsulates this ethos. It stems from fashion entrepreneur Sophia Amoruso’s 2014 memoir #Girlboss, in which she defined her own capitalist success as the new feminism. But Amoruso, former employees alleged, was not a good boss and her company declared bankruptcy. Still, in 2017 she expanded #Girlboss into a new feminist-brand venture, hosting conferences where women network and take selfies under an ethos that foregrounds individual status as the ultimate feminist goal. It’s a feminism reoriented from women’s collective equality toward personal achievement. Verma, who was rising up the Republican ranks while pulling the social safety net out from under poor women, makes a perfect fit.

Verma rose up the Republican ranks while pulling the social safety net out from under poor women.

“Feminism that prioritizes the individual will always, at its core, be at odds with feminism that prioritizes the collective,” New Yorker writer Jia Tolentino wrote in her book Trick Mirror. In it, Tolentino traces a warping of feminism that leads straight to Verma’s PR plan and similar abuses of feminism by women close to Trump. It started as the internet democratized feminist takes, bringing cultural analysis from the ivory tower to the blogosphere. This led to a “seachange,” Tolentino writes, in which women began to understand their lives in feminist terms. Feminist writers increasingly defended certain female celebrities, standing up for so-called “difficult” women whom society deemed aesthetically imperfect, selfish, or demanding—traits that men are rarely criticized for. The assumption was that new freedoms to be difficult bestowed on famous women would trickle down, also freeing regular women from patriarchal expectations.

The urge to defend celebrity women, coupled with the capitalist vision of female success, became a savvy way for conservative women to define themselves in feminist terms. As Tolentino explains, the women of the Trump administration “have benefited from the pop-feminist reflex of honoring women for achieving visibility and power, no matter how they did so.” This reflex has led to multiple instances in which liberal feminists rush to the aid of Trump’s female enablers—Kellyanne Conway, Hope Hicks, Sarah Huckabee Sanders, Melania Trump, Ivanka Trump—because criticism targeting them triggered an automatic defense of a powerful woman, rather than a critique of how she got that power or what she does with it.

This Verma scandal is ultimately a small footnote in the record-breaking annals of Trump administration corruption. But it is a perfect illustration of how Republicans have learned to hack modern feminism. If Verma is an example of girl power, the collective wellbeing of women is taking a backseat.