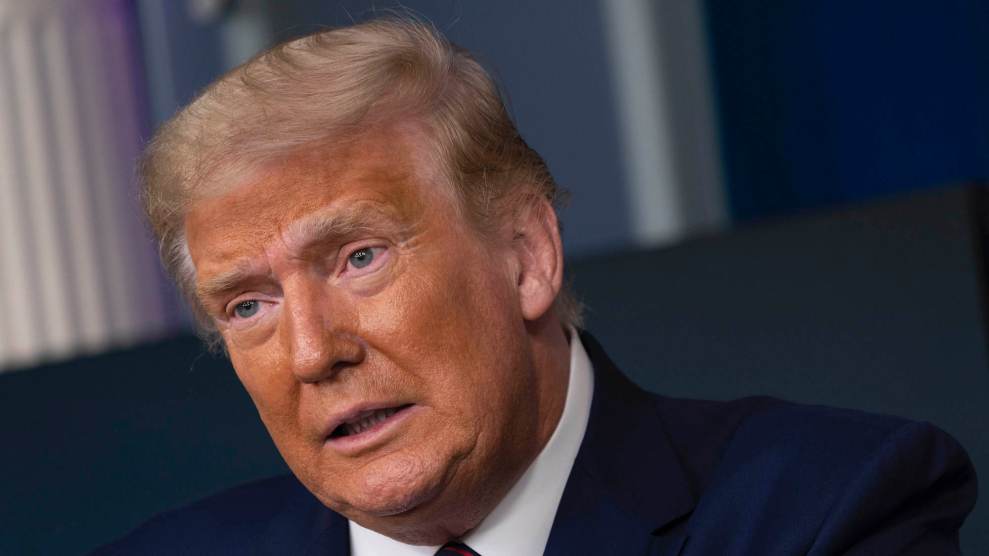 Donald Trump has hundreds of millions of dollars of debt coming due in the next few years—a cash crunch that will leave him with few good options for paying off or refinancing his loans. And the New York Times’ blockbuster story on his tax returns has revealed a new twist: Depending on the results of an IRS audit, he could also be on the hook for at least another $100 million in taxes, interest, and penalties. Together, these pending and potential liabilities suggest that Trump’s empire—with his core business already suffering from the pandemic—could face intense financial pressure in the immediate future. It’s not at all clear he has the available cash—or the ability to borrow more—to stave off disaster.

Trump entered the Oval Office with more conflicts of interest than any other president in history. Unlike previous ultra-wealthy presidents and vice-presidents, such as John F. Kennedy and Nelson Rockefeller, the question wasn’t simply what he owned. It was and remains what he owes. For years, ethics experts have raised concerns about Trump’s various debts because Trump’s creditors, including German banking giant Deutsche Bank, hold unique leverage over the president. If Trump defaults, they have the power to seize many of his most beloved properties—Trump Tower, his Doral golf course, and his luxury hotel in downtown Washington, DC. In some cases, they could even come after him personally. In June, Mother Jones reported that Trump has nearly a half-billion dollars in loans coming due during a theoretical second term. How Trump plans to handle these debts poses a very real, very serious, and very immediate dilemma.

Even before he took office, Trump’s history of corporate bankruptcies and infamous litigiousness made him radioactive to many big banks. If anything, his time in office has made him more toxic. Before he was a mere credit risk; now he is a reputational one. As one banking expert told Mother Jones, this means that Trump might be forced to rely on less traditional sources of capital:

Nancy Wallace, a real estate finance professor at University of California, Berkeley’s Haas School of Business, says the scrutiny that Deutsche Bank has faced may scare off other banks. “I think any bank I can think of in the United States would have exactly the same response: He is toxic. Exposing yourself to that kind of oversight under the current regulatory reality, for lenders who are large enough to provide capital to him, is just a nonstarter.”

“The world has changed a lot since 2012, and I think the Trump Organization is ill-suited for this new world,” Wallace says. “That’s not to say there’s not some private equity firm out there that would be very tempted if he was willing to pay a very high coupon.”

Private equity firms specialize in taking advantage of bad situations—buying proper­ties and debt that most Wall Street firms won’t touch. It’s not that they’re unaware of the risks; the terms of the deals they strike are often designed to ensure they get their money back, one way or another. And they will not hesitate to come after a delinquent borrower—perhaps even a president.

There are plenty of other people with money—foreign oligarchs, state-owned banks around the globe, or just wealthy conservative billionaires—who could probably help Trump refinance. But what would they want in return? As far as reputable lenders go, the US president has very few options. If he can’t refinance, he needs to pay off the loans, and it’s not clear whether he has anywhere near the amount of cash needed to settle his debts. An analysis of Trump’s most recent financial disclosure (which covered through the end of 2019) found that he had anywhere between $46.7 million and $156.6 million available in checking or money-market accounts.

If Trump can’t pay, he could face the prospect of losing his properties. Having a president face foreclosure is obviously completely uncharted territory.

To make matters worse, the New York Times story reports that Trump is confronting another looming threat to his cash situation—the possibility that he could be forced to pay a whopping $100 million in federal taxes, interest, and penalties. According to the Times:

[C]onfidential records show that starting in 2010 he claimed, and received, an income tax refund totaling $72.9 million — all the federal income tax he had paid for 2005 through 2008, plus interest.

The legitimacy of that refund is at the center of the audit battle that he has long been waging, out of public view, with the I.R.S…

The dispute may center on a single claim that jumps off the page of Mr. Trump’s 2009 tax return: a declaration of more than $700 million in business losses that he had not been allowed to use in prior years. Unleashing that giant tax-avoidance coupon enabled him to receive some or all of his refund…

A partner who walks away from a business with nothing — what tax laws refer to as abandonment — can suddenly declare all the losses on the business that could not be used in prior years. But there are a few catches, including this: Abandonment is essentially an all-or-nothing proposition. If the I.R.S. learns that the owner received anything of value, the allowable losses are reduced to just $3,000 a year.

And Mr. Trump does appear to have received something. When the casino bankruptcy concluded, he got 5 percent of the stock in the new company. The materials reviewed by The Times do not make clear whether Mr. Trump’s refund application reflected his public declaration of abandonment. If it did, that 5 percent could place his entire refund in question.

If the auditors ultimately disallow Mr. Trump’s $72.9 million federal refund, he will be forced to return that money with interest, and possibly penalties, a total that could exceed $100 million.

And that doesn’t appear to include money he would owe the state or city of New York. Nor does it factor in fines, back taxes, or other financial penalties that could result from the ongoing investigations by New York Attorney General Letitia James and Manhattan District Attorney Cy Vance related to the Trump Organization.

Taxes aside, 2020 is likely going to be a historically bad year for Trump’s businesses. According to Trump’s most recent personal financial disclosure, nearly three-quarters of Trump’s revenue (which, as the Times piece reminds us, is not the same as profit) comes from the hospitality industry—his golf courses, hotels, and resorts. And that’s a sector that all but ground to a halt this year, due to the coronavirus pandemic. Many of Trump’s properties have reopened, but at nowhere near their previous capacity. In just one example of how the pandemic is afflicting Trump’s bottom line, his Scottish golf resorts, already big money-losers, lost virtually all of their international clientele this summer.

A few weeks ago, it was reported that Trump was seriously trailing Democratic nominee Joe Biden in the fundraising game and was considering pouring as much as $100 million into his own presidential campaign. It’s becoming increasingly difficult to see how he could afford to do that.