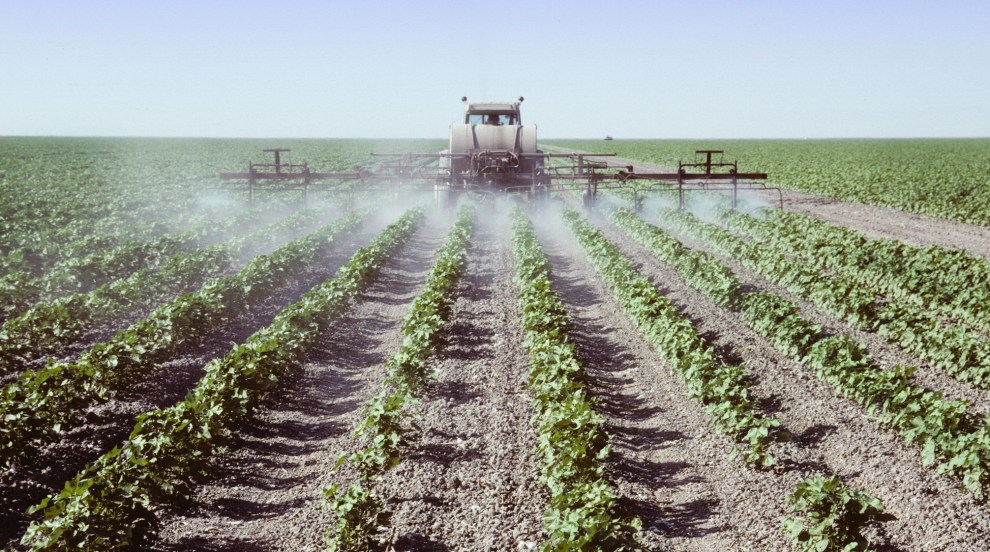 Young cotton plants get a dose of pesticide. Balefire9/iStock / Getty Images Plus

The Georgia electorate has swung to Republican candidates in every presidential election since 1996; but this year, Democratic presidential nominee Joe Biden has edged ahead  of President Donald Trump in polls there. Sen. David Perdue (R.-GA)—first cousin of USDA chief Sonny Perdue—also faces a fierce Democratic challenge for his seat. On Oct. 27, a week before the final day of voting, Andrew Wheeler, administrator of the US Environmental Protection Agency, alighted upon this unexpectedly contested electoral territory to to deliver the agency’s much-awaited verdict of a controversial herbicide widely used by the nation’s cotton and soybean farmers, including Georgia’s.

At an outdoor presentation at cotton farm in Bulloch County, Georgia (video here), with cotton ripening in the sun behind him, the chief US environmental regulator and former coal lobbyist delighted a socially distanced crowd by announcing he had decided to greenlight, for five years, two versions of a weed killer called dicamba that have been tweaked by chemical giants Bayer (formerly Monsanto) and BASF. These products are specially designed to be sprayed on patented cotton and soybean strains genetically engineered by Bayer to withstand them, leaving crops pristine but slaying weeds. The seed-and-herbicide combo, known as Roundup Ready Xtend, has emerged as a major profit center for Bayer and now dominates the vast US soybean and cotton plantings.

Of Wheeler’s 52 trips from Washington, DC, in 2020 to attend events, 40 have been to hotly contested swing states.

But there’s a problem, noted by the 9th Circuit Court of Appeals in San Francisco back in June, ruling on a lawsuit filed by environmental and progressive farm groups: dicamba has a lavishly documented tendency to drift off-target and damage crops and other foliage in neighboring fields. Bayer and BASF’s formulations, originally approved in 2017, were supposed to solve that problem, but didn’t, the court asserted. Citing the drift problem, the court vacated the EPA’s previous approval of the Bayer and BASF products, making them illegal to use going forward.

That ruling wasn’t the only legal misfortune visited upon the two chemical giants by dicamba’s wayward ways this year. In February 2020, a federal jury awarded a Missouri peach farm $265 million for damage incurred on its orchard. In June, weeks after the  9th Circuit Court’s rebuke of the EPA, Bayer settled another lawsuit, by agreeing to pay $400 million to farmers whose crops were damaged by the chemicals. Dicamba also suffered a setback on the public-health front. In a paper published on May 1, a team of US government scientists found that people exposed to dicamba show heightened risk of liver cancers.

Wheeler’s Georgia announcement ensures that dicamba will be back in action 2021. In the new registration, the EPA acknowledged the drift problem by requiring farmers to mix a “an approved pH-buffering agent” with their dicamba before spraying it. These additives, an agency spokeswoman said on a press call after Wheeler’s Georgia ceremony, “makes [dicamba] dramatically less volatile.” She also claimed that “many” such additives “are available on the marketplace,” and “are registered with the EPA.”

Over email, I asked the EPA press office for a list of approved additives; for research evaluating their effectiveness at keeping dicamba in place; and why, if they’re widely available and effective, neither the agency nor Bayer has promoted their use among farmers. I will update this post when I receive answers.

Bob Hartzler, a professor of agronomy at Iowa State University who works with the state’s farmers on weed control, said he was “disappointed” in the EPA’s decision. Back in July, he reported  that “dicamba injury across the Iowa landscape in 2020 is the most extensive” ever. He said he’s “not convinced” the additives are sufficient to tame dicamba’s volatility problem. He added that, in contradiction to the EPA spokesperson’s claim on the press call, he’s not aware of any such additives on the market; nor has the EPA shared any data on their effectiveness with him, despite his position as the chief public weed scientist in the leading soybean-growing state. Bayer and BASF are both working on their own volatility-reducing additives for dicamba, the trade journal AgWeb reported on Oct. 1, adding that they still “need EPA approval.”

The Center for Food Safety, one of the environmental groups that successfully sued the EPA to halt the registrations of Bayer and BASF’s dicamba products, vowed to go back to court. “Rather than evaluating the significant costs of dicamba drift as the 9th Circuit told them the law required, EPA rushed re-approval as a political prop just before the election, sentencing farmers and the environment to another five years of unacceptable damage,” George Kimbrell, the group’s legal director, said in an emailed statement. “We will most certainly challenge these unlawful approvals.”

The move marks the second time the Trump EPA has intervened on the side of gigantic global chemical company to keep a high-selling pesticide on the market over the objections of scientists. Back in March 2017, then-EPA administrator Scott Pruitt signed an order denying the agency’s own proposal to ban an insecticide chlorpyrifos. Its maker, Dow Chemical,  had contributed $1 million to the president Trump’s inaugural committee. Here’s more on the chemical from my piece at the time of the EPA reversal:

Wheeler’s dicamba ceremony in Georgia also fits into another theme of the Trump administration: officials traveling to swing states to make announcements that please local constituencies ahead of the election. An October 29  Politico analysis found that of Wheeler’s 52 trips from Washington, DC, in 2020 to attend events, 40 have been to hotly contested swing states. At the dicamba event in Georgia, Wheeler didn’t brandish campaign paraphernalia or talk directly about the campaign; be he did praise the Trump era’s EPA’s highly controversial record, boasting to the assembled that “we have done a lot in the last four years to improve the way environmental regulation and environmental laws work in this country.”

The US Office of Special Counsel is a government watchdog group that enforces the Hatch Act, a 1939 law that prohibits executive branch employees from engaging in electioneering. The OSC has cited the Trump Administration for 14 violations of the act, vs. just two violations for the entire eight years of the Obama presidency. “The scale, frequency, and seriousness of violations during the Trump administration is without comparison,” said Donald Sherman, deputy director of the non-partisan Citizens For Responsibility and Ethics in Washington (CREW).

Sherman added Wheeler seemed to avoid a direct violation of the Hatch Act at his dicamba ceremony, by not overtly campaigning. “In a vacuum, this looks like something that would be on the permissible side of the line,” he said. “But the OSC has found s that context matters—and the fact that the White House has admitted to coordinating official events to help vulnerable Republicans, and is still under investigation for that conduct, dating back to 2018, up to this election— leads me to believe that this is something that OSC should look at, and that the Trump administration shouldn’t be given the benefit of the doubt.”

On Thursday, October 29, Wheeler turned up in another swing state, North Carolina, to make another controversial announcement about pesticides that will please farm interests. At an event at a corn and soybean farm in Goldsboro, the heart of the state’s agribusiness-heavy east, Wheeler announced new rules that weaken EPA regulations designed to protect farm workers from being sprayed with pesticides.