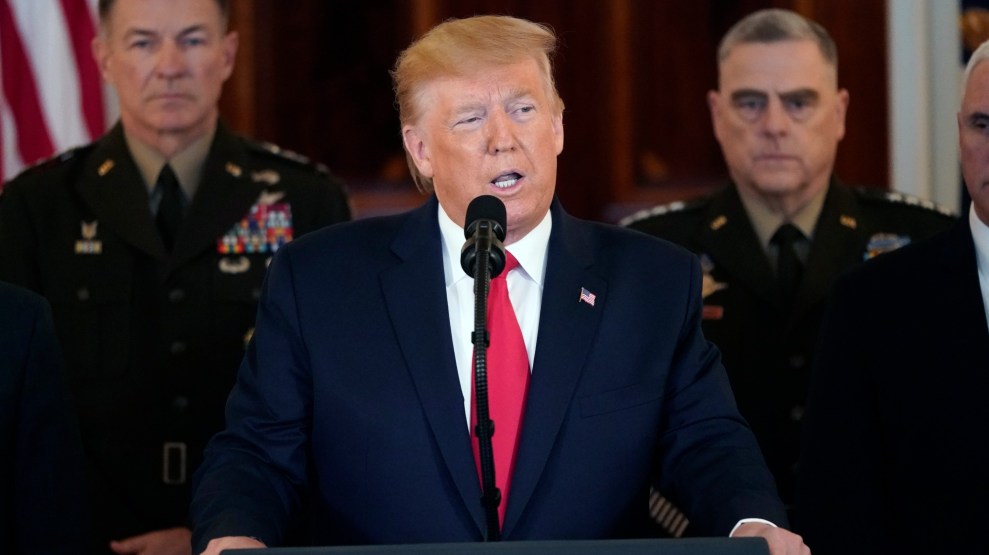 Donald Trump really seems to like hypersonic missiles, an elusive, high-speed weapon that poses problems for even the most sophisticated air defense systems. He likes them so much that the military asked for $3.2 billion from Congress this year to further research the missiles, which have become a key focus for China and Russia’s militaries, too. The only problem? He doesn’t seem quite able to pronounce their name.

"I call 'em super-dupers" — here's a supercut of Trump bragging about the military's "Hydrosonic" missiles.

("Hydrosonic" is a toothbrush brand; the word Trump is looking for is "hypersonic," but over a span of many months nobody has bothered correcting him.) pic.twitter.com/RXO3E2PHP3

When not referring to them as “super-dupers,” Trump seems to conflate the missiles with Hydrosonic, a brand of toothbrushes. An unfortunate mistake, perhaps, but a persistent one for him. Attention to detail does not appear to be a signature feature of either Trump’s arms control policy or his oversight of the Defense Department. Last month, after regularly bragging about the fat budgets he’s given the Pentagon, Trump said the top people at the department “want to do nothing but fight wars so all of those wonderful companies that make the bombs and make the planes and make everything else stay happy.” That momentary concern with special interests holding too much sway at the Pentagon hasn’t seemed to stop him from lavishing more money on the defense industry.

As I reported last month:

After the journalist Jamal Khashoggi was brutally murdered by agents of Prince Mohammed bin Salman of Saudi Arabia, Trump defended the Saudi dictator by noting that the kingdom had committed to spend $110 billion on “military equipment from Boeing, Lockheed Martin, Raytheon and many other great US defense contractors.” During a meeting with the Vietnamese prime minister, Trump pitched him on importing weapons from the United States. “We make the best military equipment in the world by far, whether it’s jet fighters or missiles or rockets or anything you want to name, we make, we’re acknowledged to have made, we make the best,” Trump said. He’s also used the White House Twitter feed to promote companies like Lockheed.

For all this investment in stockpiling weapons, the Trump administration has been far less interested in diplomacy. Under Trump, the White House has retreated from multilateral organizations like the United Nations, repeatedly tried to gut the State Department, and exited all but one major arms treaty. Despite his tough talk, the “global threat from nuclear weapons and menacing missiles has grown since President Trump entered office,” the Washington Post reported last week.

Meanwhile, that final arms control agreement, the New START treaty with Russia, is nearing its expiration date in February. Despite some high-profile negotiations last week, the two sides have not finalized a deal to extend it. If the treaty does expire, it’ll take a whole lot of “super-duper” diplomacy to rein in the ensuing arms race.