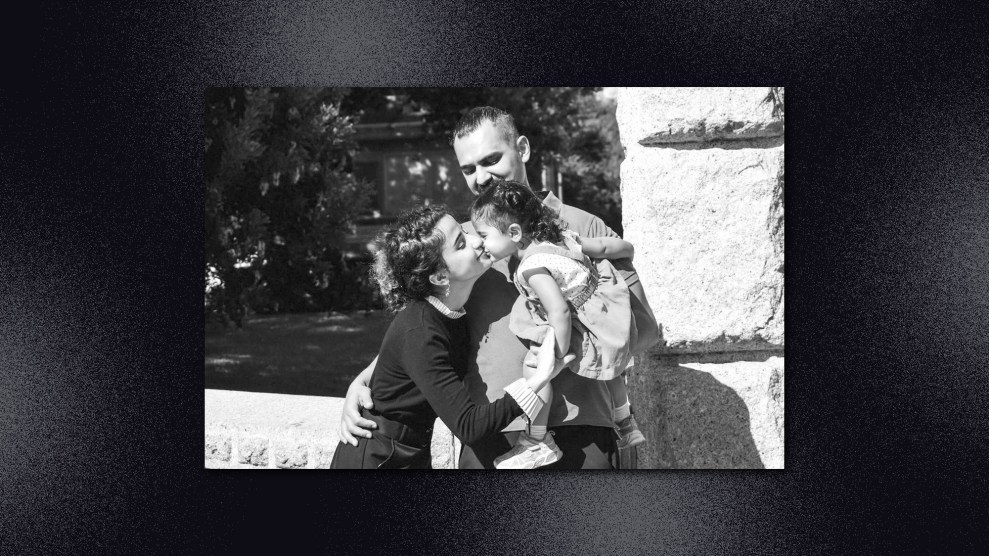 As part of an effort to keep out working-class immigrants, the Trump administration issued a rule that blocks people from getting green cards if immigration officers decide they’re likely to use public benefits in the future—to become, in antiquated parlance, “public charges.” The rule has caused many immigrants to unenroll from public benefits. Shahad Sarmad stopped getting food stamps for herself and her baby because she fears accepting them will cause her husband, whom she is sponsoring for a green card, to be labeled a public charge.

From: Iraq
Lives in: Austin, Texas

My husband and I are from Iraq. I’ve lost two of my family members since we applied for his green card in May: my father and my uncle, who was like a second father to me. He was an officer in the Iraqi military and was killed by ISIS. My father was in the army, too. He worked with the US military.

I couldn’t go back home for my uncle’s funeral because I’m the only person in my family who can work here. I work seven days a week. I went into a very bad depression after my uncle got killed. I left my full-time job and kept working as a delivery driver with Grubhub, which I need to do so that my husband won’t be considered a public charge. I barely make $1,200 a month.

My husband hasn’t been allowed to work since he moved here in December. He has a degree in biomedical engineering and used to work as a project manager in London. I got my degree in Iraq in business administration. Now I’m renewing Medicaid for my 18-month-old and me. My lawyer told me to stay on it but worries that it could make USCIS see my husband as a public charge.

After the first Gulf War, the economy in Iraq was very bad. My uncle and my father had to work for the Iraqi army so they could support their families. After 2003, they went back to serve in the army even though it was very dangerous. I felt scared my entire childhood. My father later worked in the US embassy in Baghdad and had lots of friends who were US officers. He started the process of applying to be a refugee in 2011. We thought it was going to take two years. It ended up taking seven.

I was 24 when I got here. I moved to the UK with my husband for a little while in 2018 but decided to come back to Austin when I was three months pregnant. I applied for my green card that year. I thought it would take six months. It ended up taking 17 months. I got it in February. While I was waiting, I went into a very bad depression. My husband wasn’t here, and I was living with my baby as a single mom. I wasn’t prepared for it. My husband returned on a tourist visa but is now able to stay while his green card application is being processed.

I heard that if you’re using food stamps, you can’t bring your mother or your father to live with you. I stopped applying for food stamps immediately.

I heard about the public charge rule when I was still applying for my green card. I heard that if you’re using food stamps, you can’t bring your mother or your father to live with you. I stopped applying for food stamps immediately. I was desperate for cash to pay rent, but I didn’t apply for cash benefits. I will never do it. I will go work for 12 hours a day at a retail shop while eight months pregnant rather than receiving cash benefits.

I see people in social media groups saying you can receive unemployment if you’re sponsoring someone. Others say you can’t. And that makes us unsure. Should we do it or not? After I left my full-time job, my lawyer recommended that I keep working because of the public charge rule.

The government makes us feel like we’re not safe until we get our citizenship. I have a relative who got an $18,000 hospital bill. She went to the emergency room for kidney pain. She wasn’t on Medicaid because she was sponsoring her husband and didn’t want him to be considered a public charge. These stories are all around me.

I’m working and keeping myself busy, but it’s not fair to make my husband go nine months without working. He got a 30-day trial at a gym so he can get out for a while. He’s trying to study coding, but he still needs a Social Security number to go to community college. Everyone relied on him at his old job, and now he’s staying home all day with the baby or just doing his daily workout. It’s getting bad. Sometimes, he doesn’t eat or get out of bed.

He’s qualified to work for companies like Apple and Samsung. We saw all these Netflix episodes about people working illegally and getting caught by ICE. That was my nightmare when he applied for his green card. I was afraid of him getting rejected and then having ICE knock on the door. They’d deport him and he’d never be able to come back and live with us.

I think my husband will eventually get approved. I’m optimistic, even though he will have to answer questions about me getting Medicaid, me leaving my job, why he waited for a long time to apply for private health insurance. But I’m afraid it won’t happen until next year. I can’t keep going and working every single day. I go to sleep thinking, “Tomorrow I’ll take a day off,” but I can’t.

My mental health has really suffered these past few years. Sometimes I feel like I need to go to see a doctor just to talk about it. I’ve never said that to anybody. This is a lot of pressure for one person. I’m only 26, but with all the pressure in my life it feels like I’m 46. Dad had a heart attack then after that my uncle. I remember going back to work and crying while delivering pizza and sushi.