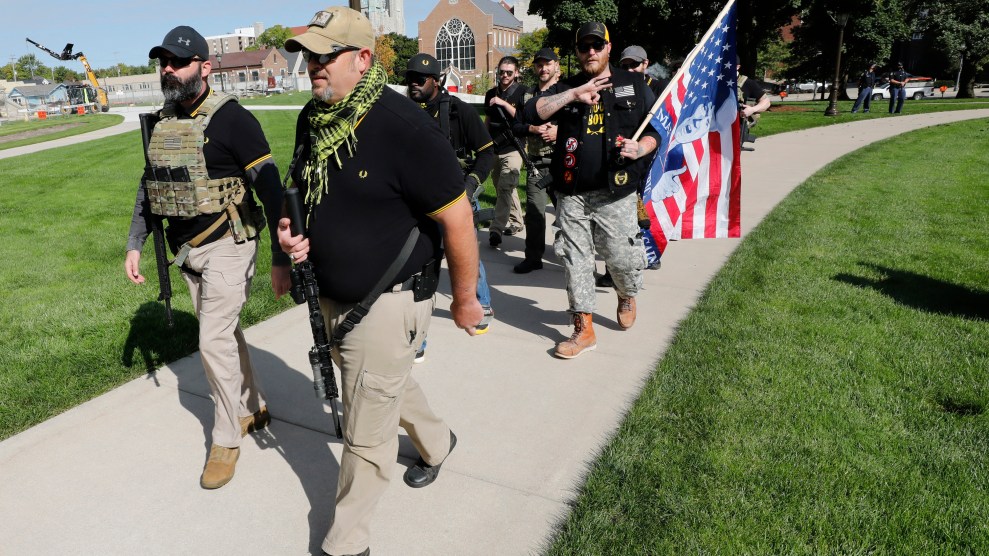 Supporters of the Second Amendment to the United States Constitution gather for a rally at the statehouse in Lansing, Michigan in September. Militia members charged on Thursday had met up at a similar rally in Lansing this past June.Jeff Kowalsky/AFP via Getty Images

On Thursday, 13 men in Michigan and elsewhere were charged by state and federal authorities for allegedly plotting to violently overthrow state governments and kidnap and possibly kill Michigan Gov. Gretchen Whitmer. Several had a history of posting far-right memes on social media, including posts in support of Boogaloos, a loose-knit group of armed provocateurs that advocates for a new civil war in the United States, and whose adherents have killed police officers and whose ranks include white supremacists. Other posts celebrated Kyle Rittenhouse, the 17-year-old facing homicide charges after gunning down three protestors in Kenosha, Wisconsin, last month.

The FBI charged six individuals with conspiracy to kidnap Gov. Whitmer, and the state of Michigan separately charged seven others with “providing support for terrorist acts,” among other charges. Brandon Caserta, one of the six described in an FBI affidavit, posted several memes endorsing the deadly shootings by Rittenhouse. One shows Rittenhouse laughing underneath the text: “when you’ve smoked 3 commies before you can legally smoke cigarettes.”

Another showed a convoluted meme depicting a man stuffing his foot in a wood chipper—an allegory for how politicians passing gun laws will only embolden Boogaloo extremists.

In an Instagram post from two years ago, Caserta praised Jordan Peterson, a reactionary Canadian psychology professor who in recent years has become an icon among young political right-wingers. Peterson’s ideology is vague and mostly focuses on attacking politically correct language and the use of someone’s preferred gender pronouns, but an analysis by the Data & Society Research Institute found that, via YouTube’s algorithms, Peterson was a gateway to violent far-right extremism. (The video-streaming platform has adjusted its algorithms since that research was conducted.)

Caserta’s activity on YouTube further suggests his worldview: He subscribed to Project Veritas, an outlet known for pushing right-wing disinformation, and the channel run by Ben Shapiro, also considered by some experts to be a gateway to online radicalization, among others. Caserta’s Facebook likes included one for the page “Michigan Revolution,” whose profile photo shows a man dressed in Revolutionary War–era clothing and holding an assault rifle paired with the text “NEW AMERICAN REVOLUTION.”

In his own Facebook videos, Caserta voiced disdain for the police, alluding to being “robbed” by them, although it was unclear what he was referring to.

Two of Caserta’s charged co-conspirators, Ty Garbin and Adam Fox, were present at an event in which “attendees discussed plans for assaulting the Michigan State Capitol, countering law enforcement first responders, and using “Molotov cocktails” to destroy police vehicles, according to the FBI affidavit.

Another man charged by federal authorities, Kaleb Franks, kept a lower profile on social media but “liked” dozens of pages on Facebook including tactical equipment and firearms sellers, as well as pro-Trump groups including Turning Points USA and the National Rifle Association.

Other online activity showed Caserta and others in the group floating across various ideologies without a coherent or consistent commitment to any particular one. But the seven men charged by Michigan Attorney General Dana Nessel were affiliated with a Michigan-based militia group called Wolverine Watchmen, with the alleged intention of overthrowing the state government.

Fox, one of the six facing federal charges along with Carseta and Franks, “said he needed ‘200 men’ to storm the Capitol building in Lansing, Michigan, and take hostages, including the Governor. Fox explained they would try the Governor of Michigan for “treason,” and he said they would execute the plan before the November 2020 elections,” according to the FBI affidavit.

Caserta, Franks, Garbin, and Fox, along with Barry Croft and Daniel Harris, the FBI said, had also plotted to attack police in hopes of igniting a civil war.

In the course of their plotting, the six men charged by the Feds reached out to the Wolverine Watchmen, according to Nessel. Seven Wolverine Watchmen members—Paul Bellar, Shawn Fix, Eric Molitor, Michael Null, William Null, Pete Musico, and Joseph Morrison—were charged by Nessel for “providing material support for terrorist acts” and, in Musico and Morrison’s case, threatening terrorism, among other charges.

Several of the Wolverine Watchmen maintained social media accounts where they posted far-right conspiracy theories. The Daily Beast reported that Eric Molitor also praised Kyle Rittenhouse on his Facebook page, posted about QAnon-adjacent conspiracy theories, and shared images in support of the III Percenters, a right-wing militia group. Musico had a profile on Gab, a “free speech” alternative social media site that has been home to white supremacists and anti-Semites. On it, Musico posted about the unfounded far-right conspiracy that in “South Africa they are killing White people.”

The FBI said that the six men it charged (who appear to be part of an extremist entity separate from the Wolverine Watchmen) first came to its attention after they noticed members of their group “attempting to obtain the addresses of local law-enforcement officers.”

“At the time, the FBI interviewed a member of the militia group who was concerned about the group’s plans to target and kill police officers, and that person agreed to become a CHS,” the affidavit read.

The affidavit also reinforces the plotters’ ties to pro-gun Second Amendment groups. In it, the FBI claims that the leadership of the group who the six facing federal charges belong to, including Garbin, met up at a Second Amendment rally in Lansing, Michigan, at the state Capitol in June.

The group, according to the FBI, had talked about storming the statehouse with hundreds of men to abduct Whitmer and take her hostage and try her for “treason.”

Their plot comes in the wake of President Trump inciting militia groups in April when he tweeted “LIBERATE MICHIGAN!” (along with other states) when armed militia members were protesting at and inside statehouses for the government to lift lockdown restrictions aimed at stopping the spread of the coronavirus. At the time, extremists saw the tweets as a call to arms.

At a press conference on Thursday, Gov. Whitmer called for greater empathy and unity in fighting the coronavirus. She also denounced violent militia groups and other far-right extremists and laid the blame for the alleged plot against her and state governments squarely at Trump’s feet. She called out his failure to denounce violent white supremacy during the first presidential debate: “‘Stand back and stand by.’ Hate groups heard the president’s words not as a rebuke, but as a rallying cry. As a call to action.” She continued, “When our leaders meet with, encourage, or fraternize with domestic terrorists, they legitimize their actions, and they are complicit. When they stoke and contribute to hate speech, they are complicit.”