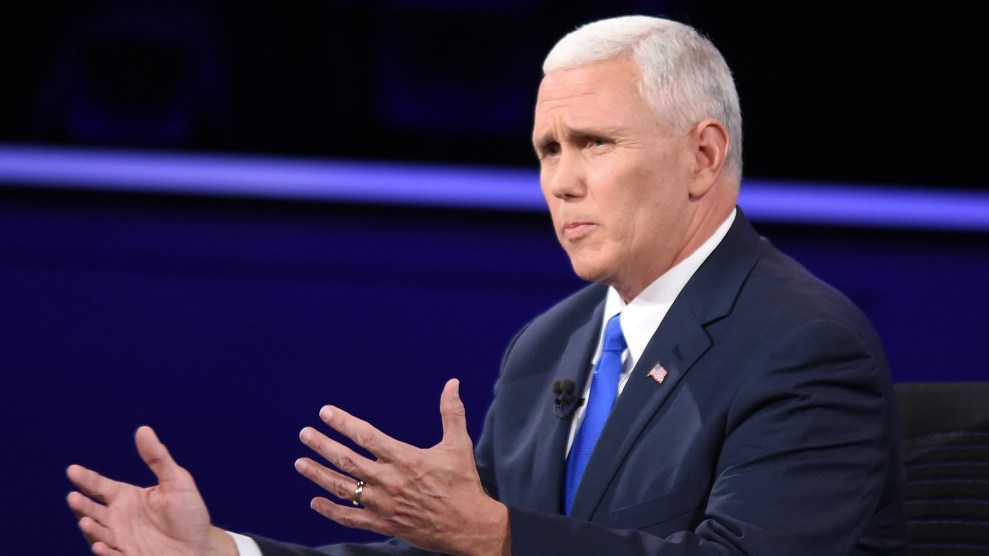 Heading into the 2016 vice presidential debate, the Republican ticket found itself in a now-familiar position: trailing in the polls and awash in scandal. Donald Trump had struggled in his first debate, and Mike Pence, then governor of Indiana, faced the unenviable prospect of defending a presidential nominee with a record of bigoted and sexist comments, legal and ethical transgressions, and deeply unpopular policies. How would Pence defend the seemingly indefensible?

The answer, it turned out, was easy: He simply denied it all.

Over and over again, to the visible frustration of his Democratic opponent, Virginia Sen. Tim Kaine, Pence returned to the same circular tactic when confronted with his own nominee’s words. First, a disappointed shake of the head and a flat-out denial, then a denial that he was in denial, and finally a vigorous promise to defend Trump should he ever be presented with anything the candidate actually said.

This year’s vice presidential debate, which tips off Wednesday night at the University of Utah, isn’t likely to shake up the race. Traditionally, this event is a box-checking affair, fan service for the kind of political diehards who lowered their flags to half-staff when CNN canceled Crossfire. The most famous line ever uttered at a VP debate was delivered by a candidate whose ticket went on to lose 40 states. Even given the advanced age of both presidential candidates—one of whom was recently hospitalized with a deadly illness—the election isn’t about the running mates, and it won’t hinge on what happens in Salt Lake City. But as Pence showed four years ago, just because a debate isn’t memorable doesn’t mean it can’t be revealing. His 2016 performance foreshadowed the ways in which nearly every Republican official—even the ones most critical of Trump—would learn to fall in line by feigning ignorance. And it offers a preview of what’s in store for Harris.

Back in 2016, at Longwood University in Farmville, Virginia, the tone was established early on. “Both Donald Trump and Mike Pence think we ought to eliminate the federal minimum wage,” Kaine said.

“No I don’t,” Pence said quietly, shaking his head with the not-mad-just-disappointed look that would remain fixed on his face for much of the next four years. But Trump had said during the campaign that the federal government should be eliminated, and Pence had previously complained that having a minimum wage “violates fundamental free market economics” and “costs jobs.” (President Trump’s chief economics adviser Larry Kudlow has called the concept of a federal minimum wage a “terrible idea.”)

Later, Kaine mentioned Trump and Pence’s stated support for privatizing Social Security—a position Trump had articulated in one of his books—appropriately titled The America We Deserve—and Pence advocated on the floor of Congress.

Pence, of course, did not defend the deeply unpopular idea. Instead he denied that either of them had held it. “There they go again, okay?” he said, invoking Ronald Reagan’s famous 1980 debate line. “All Donald Trump and I have said about Social Security is we’re going to meet our obligations to our seniors. That’s it.”

(This assertion is even more questionable today, now that Trump has proposed permanently eliminating the payroll tax—through which Social Security is funded.)

Like the Clinton campaign more broadly, Kaine focused a lot of his energy on all of the terrible things Trump had said about, well, everyone—and challenged Pence to defend any of them.

“Donald Trump during his campaign has called Mexicans rapists and criminals,” Kaine said. “He’s called women slobs, pigs, dogs, disgusting. I don’t like saying that in front of my wife and my mother. He attacked an Indiana-born federal judge, and said he was unqualified to hear a federal lawsuit because his parents were Mexican. He went after John McCain, a POW, and said he wasn’t hero because he’d been captured. He said African-Americans are living in Hell. And he perpetrated this outrageous and bigoted lie that President Obama is not a US citizen.”

Once again, Pence didn’t take the bait. He did not even accept the premise that Trump said these things. “If” Trump said them, he argued—if—it was nothing compared to the things Hillary Clinton had said, such as her remark that many Trump voters were “deplorable.”

Pence denied that Trump had promised to send a “deportation force” to deport undocumented immigrants, and denied that a federal judge had struck down Pence’s own order blocking Syrian refugees from coming to Indiana (a state-level version of what Trump would eventually do at the national level).

“With respect to refugees, we want to keep people out if they’re dangerous,” Kaine said a short while later. “Donald Trump said keep them out if they’re Muslim.”

Pence, again, shook his head with a pained look. “Absolutely not.”

Just to be clear: At the time of this debate, the “Muslim ban” was still posted on the Trump campaign website.

When the subject turned to foreign policy, Kaine pointed out that Trump called NATO “obsolete and that we need to get rid of NATO.”

“That’s not his plan,” Pence said.

Not only was this a fair rendering of Trump’s views then, but the New York Times reported last year that Trump as president had, in fact, floated breaking up the alliance. A man of his word, just like Pence promised.

Pence’s habit of shaking his head and saying something was not true when confronted with something that was started to wear on Kaine. Eventually, he got tired of it and called Pence out on his strategy.

“Six times tonight, I have said to Governor Pence I can’t imagine how you can defend your running mate’s position on one issue after the next,” he complained, “and in all six cases, he’s refused to defend his running mate.”

Pence, predictably, denied that too. “Well, let’s—no, no, don’t put words in my mouth,” he said, adding, “I’m very, very happy to defend Donald Trump. If he wants to take these one at a time, I’ll take them one at a time.”

Kaine obliged. “More nations should get nuclear weapons—try to defend that,” he said.

“Most of the stuff you’ve said, he’s never said,” Pence insisted, starting the cycle yet again.

Trump did say those things, of course. The real tell was that Mike Pence said he hadn’t.