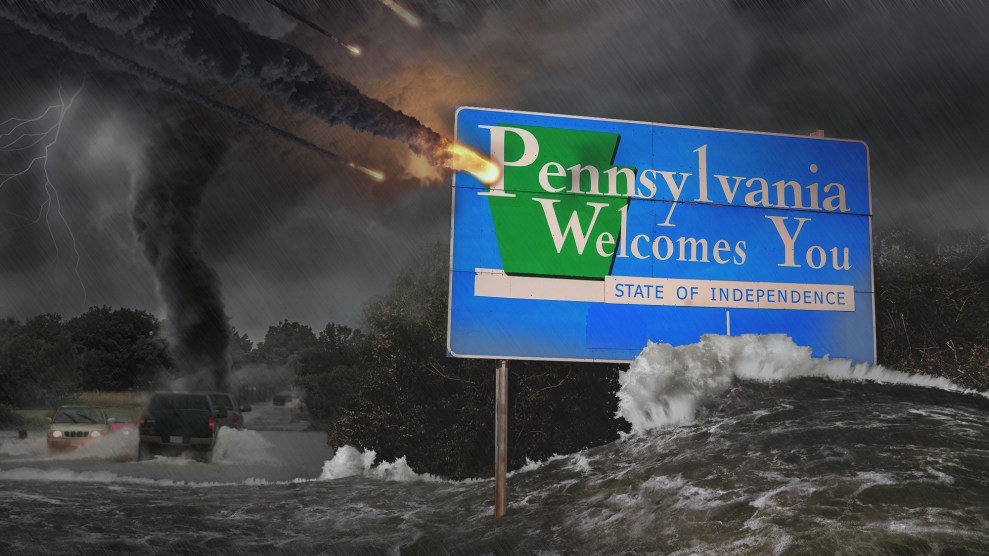 With a record of nearly 30 million Americans already having cast votes as of Monday morning, the 2020 election is well underway—and problems are already popping up in key swing states.

Philadelphia’s top election official has warned of “post-election legal controversy, the likes of which we have not seen since Florida 2000.”

Perhaps nowhere worries experts more than Pennsylvania. As a perennial presidential battleground, its 20 electoral college votes—decided by just 44,292 votes in 2016—always attract the spotlight. But this year, the state is grappling with a number of unprecedented conditions and challenges that could complicate the smooth administration of November’s election, including a recent overhaul of state election law predating the pandemic, continuing fights over changes to voting prompted by the coronavirus, and a growing sense that President Donald Trump’s campaign and supporters will ignore democratic norms to ensure victory in a state that he must win. It’s a brew that in a close election could send the state in the direction of high stakes, drawn out, and hard fought post-election challenges that could determine the fate of the nation.

“If the election comes down to electoral college votes in Pennsylvania, I think it’s going to be hell,” says Rick Hasen, a UC Irvine law professor and expert on election administration and voting rights.* “That’s one of the worst possible outcomes.”

For Hasen, the state’s inexperience with mail ballots is a key concern. In 2019, Pennsylvania’s Republican controlled legislature passed a bill with largely bipartisan support that allowed voters, as part of a growing national trend, to cast ballots by mail under any circumstance. This fall’s general election would have been the first conducted under the new rules, but no one expected a pandemic would push an unforeseeable number of the state’s 8.8 million voters to opt for mail balloting. The flood could swamp little-tested mailing, handling, and processing procedures. Already, issues are flaring up: On October 14, election officials in Allegheny County, home to Pittsburgh, announced that nearly 29,000 ballots went to voters with the wrong contests, a mistake noticed by attentive voters. Officials intervened to prevent another 19,000 faulty ballots from being sent, and have pledged to re-issue correct ballots.

Adding to Hasen’s worries is a state law that bans substantial processing of mail ballots until Election Day. The provision is almost certain to result in a delay between the release of results collected at in-person polling places and those that came by mail ballots, hindering the quick designation of a clear winner. Trump supporters have outlined plans to exploit the delay. Last week, the Associated Press reported that Trump allies think “their best bet” at holding the White House is to “hope results look close on election night, before some of the mail-in ballots are counted, allowing Trump to declare victory and have the results thrown to the courts.”

“If the election comes down to electoral college votes in Pennsylvania, I think it’s going to be hell.”

Pennsylvania’s Democratic secretary of state, Kathy Boockvar, told reporters at a press conference last week that she thought there was “still…hope for a legislative deal that would allow counties to do more pre-processing of mail ballots, but that absent one, local officials are prepared to do their best to get a quick count. By Monday, the legislature’s Republicans, who had put forth a package that would have allowed just three days of pre-processing while banning all drop boxes, said any chance of a legislative deal was dead.

During the press event, Boockvar rebuffed the broader idea that Pennsylvania is the year’s most worrisome swing state, citing longstanding work by her staff and others to safeguard voting. She added that her office is also working to “expand preparedness for on-the-ground issues,” such as voter intimidation.

“We look at election security across the board in every realm,” she said, “and I’m so proud of the partners that we work with at the federal, state, and local level to make sure that every voter in Pennsylvania can have tremendous confidence that their vote will be counted securely and safely, and counted accurately.”

It’s Boockvar’s job to make sure that happens, and as part of the effort, her office has been involved in several federal and lawsuits pushing for interpretations of election rules that would make voting easier. While Pennsylvania Republicans have failed to convince judges overseeing the election to limit drop boxes or make it easier to discard ballots over disputed signatures, they did win a portion of a state supreme court case upholding a requirement that ballots must be returned inside two envelopes. Last month, Lisa Deeley, Philadelphia’s top election official and a Democrat, wrote the legislature’s Republican leaders asking them to end the rule, saying it could lead to up to 100,000 rejected ballots while providing no substantial privacy benefit. Deeley’s letter warned the rule puts the state on course to be “the subject of significant post-election legal controversy, the likes of which we have not seen since Florida 2000.”

The same state supreme court ruling will allow local officials to count ballots that arrive up to three days after the election, in some cases even if they lack a postmark. While that will benefit voters who mail ballots close to the election or whose ballots encounter postal delays, it will push back finalization of results, and potentially create time-consuming debates over late-arriving, unpostmarked ballots. The state’s Republican legislative leadership asked the US Supreme Court to reverse that aspect of the ruling, and on Monday the court split 4-4 on the question, a tie that leaves the state supreme court’s greater allowance for late-arriving ballots in place.

Mike Straub, communications director for the Republican House majority, insisted that even though the body has failed to pass a bill expanding ballot pre-processing, GOP lawmakers “share concerns over the election, and ensuring accurate and secure results in a timely manner.” He assailed the state’s supreme court ruling as an “openly partisan decision” that “will potentially put Pennsylvania in the middle of a disastrous national crisis as the world awaits the Commonwealth to tally election results days or weeks after Election Day.”

A GOP spokesman said judicial rulings had set up “a disastrous national crisis as the world awaits the Commonwealth to tally election results.”

While observers expect misinformation about voting and results to run rampant in any time between polls closing and results being certified, Pennsylvania has already become an epicenter of White House-fueled disinformation on mail ballots and election integrity. In September, the Justice Department issued an unusual press release on an investigation into how one Republican-controlled Pennsylvania county threw away nine mail ballots. The release disclosed that some of the ballots contained votes for Trump, prompting a flood of messaging attacking the absentee ballot process from the president, his attorney general, and campaign allies. (A county official later said the incident had been an inadvertent mistake by a temp worker.) The drumbeat continued during the September 29 presidential debate, when Trump alleged that “bad things happen in Philadelphia,” falsely claiming that Republican poll watchers had been barred from a satellite early voting office.

Chris Deluzio, a voting rights expert at the University of Pittsburgh’s Institute for Cyber Law, Policy, and Security, said conditions in the state, combined with Trump’s attacks on the integrity of voting by mail, suggest that the pitched battles the state has already seen could stretch beyond the election.

“When I think about the rhetoric coming out of the White House, and the things Donald Trump is saying about delayed results, I think it sets up Pennsylvania to be an obvious place for campaigns and candidates to fight,” he said.

Deluzio says an additional wrinkle facing the state is that people who go to polling places in most of the state’s 67 counties will use equipment acquired since the last major election. “Many voters have not used these new machines,” he said, which could potentially cause lines on Election Day. Meanwhile, Trump has called upon his supporters “to go into the polls and watch very carefully” for signs of fraud. Deluzio worries such instructions could lead to indiscriminate challenges from GOP poll watchers that could “gum up the works” by contesting legitimate in-person voters’ ability to participate, slowing voting in Democrat-heavy urban centers like Philadelphia and Pittsburgh. He’s also concerned armed supporters of the president could show up outside polls and intimidate voters. “The risks are real,” he warned. “It merits folks paying extra special attention to what’s happening here.”

“Many voters have not used these new machines…the risks are real.”

“When every eligible ballot is counted, the voice of Pennsylvania voters will drown out the threats, attacks, lawsuits, and disinformation directed at the Commonwealth,” Shapiro said in a statement. “My office and the PA Dept. of State are working hard to bring an end to the distracting litigation, educate voters on how to properly cast their ballot, and stop the misinformation that improperly undermines faith in our election.” He added that his office is “working closely with law enforcement colleagues at the local, state and federal levels to prevent fraud, intimidation, and interference so everyone can have confidence in Pennsylvania’s voting process.”

A proposal from Republicans in the legislature would have stood up a GOP-controlled commission with investigatory powers to review the 2020 election and file legal claims, potentially even while voting was still taking place. The broad language in the resolution creating the commission had an eerie echo to the explosive reporting from The Atlantic‘s Barton Gellman, who spoke with senior Pennsylvania Republicans who said they were weighing ways to “bypass” election results and have the legislature select Trump-friendly electors if they could point to problems with the election. A scenario like that, Hasen said, “would inspire national rioting.”

While the commission seemed ready-made to help provide Pennsylvania Republicans with claims of election malfeasance, after stiff opposition from Democrats and even some fellow Republican members of the legislature, the proposal was withdrawn from the legislative calendar earlier this month—suggesting that as messy as things get, there could be a limit to how far Pennsylvania Republicans can or will go to protect the reign of an unpopular president.