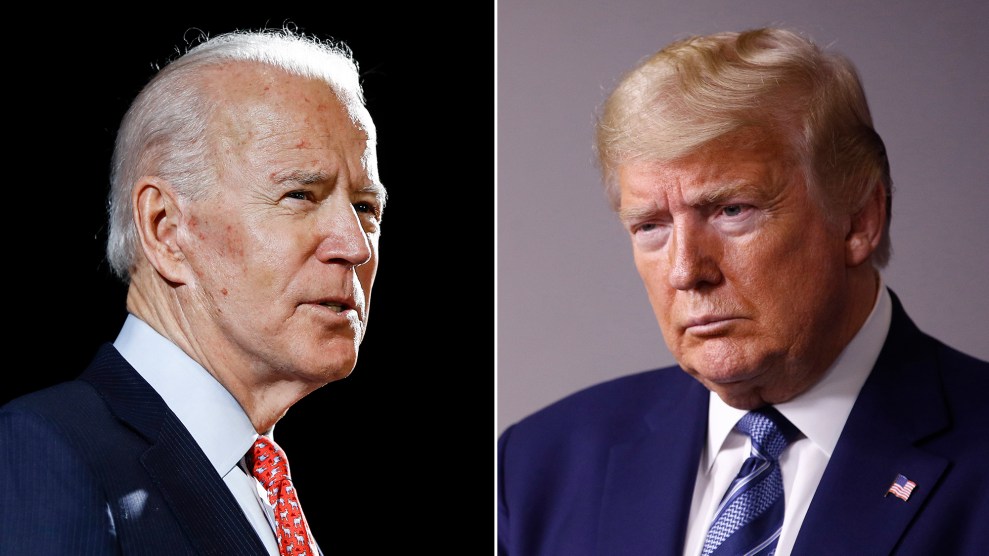 Mother Jones Podcast host Jamilah King was joined by eight reporters from across the Mother Jones newsrooms last night for a special live taping of the award-winning weekly podcast. They gathered to discuss the key issues and latest election news as the country heads into the final week of voting before November 3.

The first half of the show focused on the election itself: What are the polls saying? What has the energy been like in each campaign? On election night, are there certain states that are the most important ones to watch? Despite Democratic candidate Joe Biden’s current lead in the polls, DC Bureau Chief David Corn cautioned that nothing should be taken for granted.

“Trump has made a bet that he can get every angry white guy Republican who’s not on a ventilator to vote for him this year. He’s not gaining votes in any category, yet still he remains competitive,” Corn told Jamilah King. “There are people who look at Donald Trump and say, yeah, I want that. Versus other Americans who look aghast at his 200,000 plus lives [lost], his handling of the coronavirus, and his bigotry, his racism, misogyny, you know the list.”

Senior Reporter Tim Murphy is our resident political historian, who can go into detail describing some obscure 19th-century election. Reflecting on the similarities and differences between the presidential races in 2016 and 2020, Murphy explained how Trump’s campaign tactics feel eerily familiar.

“It’s a really weird kind of déjà vu where we’re seeing the same thing, but stupider,” said Murphy. “The Trump campaign is trying to recreate the exact same playbook against a much different opposition.”

One basic difference between 2016 and 2020 is the way that the progressive left has coalesced around Joe Biden’s candidacy, even as the former vice president has positioned himself as the moderate candidate. DC-based reporter Kara Voght covers progressive politics and noted, “People who sat out 2016 because they didn’t like Hillary Clinton will not make that mistake again.” Indeed, now it seems as if “everyone is holding hands and walking through the door together to get Joe Biden elected.”

But that all depends on whether they are able to vote at all and have their votes counted. Voting rights Senior Reporter Ari Berman was quick to point out the impact that Supreme Court Justice Amy Coney Barrett’s confirmation could have on the election.

“The Supreme Court’s affecting the election as we speak,” said Berman, referring to the Supreme Court’s 5–3 decision to uphold Wisconsin’s voting laws, meaning that ballots that are postmarked by election day but counted after will be discounted. He imagined that this newly configured Supreme Court “will try to roll back virtually all voting rights protections.”

So there’s an overview of the politics of this election, but what about what’s at stake for the country? The second half focused on some of the big issues like immigration, COVID-19, racial justice, health care, disinformation campaigns, and white supremacy. DC-based reporter Nathalie Baptiste, who covers racial justice, summed up her top takeaway from Donald Trump’s first four years: “No matter what it is that Trump is doing and saying, there’s a 99 percent chance that it’s actually just racism.”