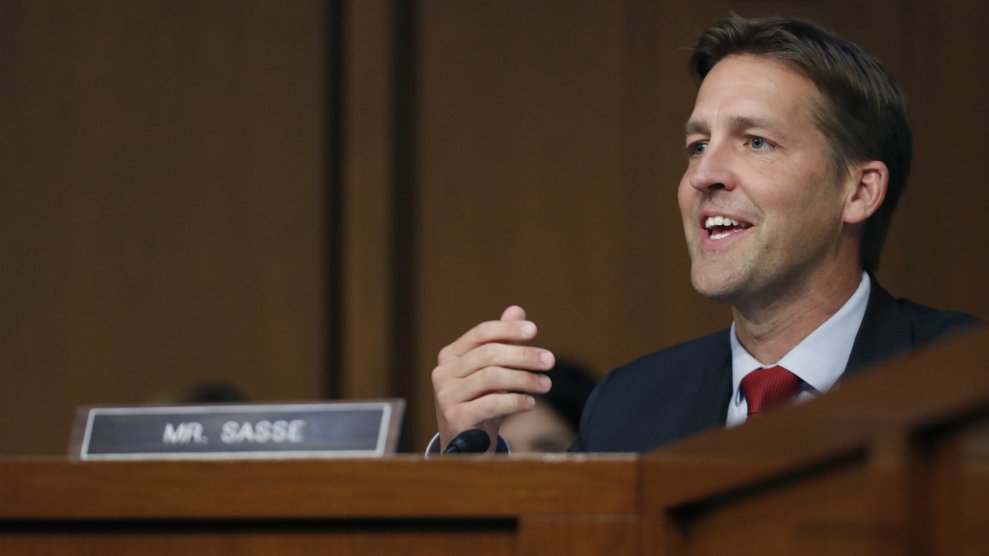 On Saturday morning, Donald Trump launched a Twitter attack on Sen. Ben Sasse (R-Neb.) after the Senator’s telephone town hall comments criticizing the president were reported in the media. Sasse excoriated Trump over his handling of the coronavirus, his foreign policy, and his sexist remarks. “I’m now looking at the possibility of a Republican blood bath in the Senate, and that’s why I’ve never been on the Trump train,” he said. In response on Twitter, the president called Sasse the “least effective” Republican senator painting him as a “stupid and obnoxious” RINO.

…Nomination to run for a second term. Then he went back to his rather stupid and obnoxious ways. Must feel he can’t lose to a Dem. Little Ben is a liability to the Republican Party, and an embarrassment to the Great State of Nebraska. Other than that, he’s just a wonderful guy!

The president is known to get riled up about even the smallest of criticisms, so his comments lashing out at Sasse are to be expected. And Sasse’s attempt to cast himself as a moderate, anti-Trump Republican is part of a broader rebranding effort ahead of what many in the GOP assume will be a bloodbath in the general election. But will they be able to distance themselves from Trumpism after spending four years watching as Trump damaged democratic institutions and eroded the public’s faith in government?

It’s hard to see Sasse’s comments as anything but a political tactic, as opposed to genuine concern for the hell the Trump presidency has unleashed. In 2016, Sasse emerged as a vocal Trump critic—he once compared the president to David Duke, a former grand wizard of the Ku Klux Klan. But when he was facing a primary challenger, he toned down the anti-Trump talk and earned himself an endorsement from the president last year.

Senator Ben Sasse has done a wonderful job representing the people of Nebraska. He is great with our Vets, the Military, and your very important Second Amendment. Strong on Crime and the Border, Ben has my Complete and Total Endorsement!

Sasse isn’t alone. Even Senate Majority Leader Mitch McConnell sought to distance himself from the president, couching his criticism is pandemic safety. Earlier this month at an event he mentioned that hadn’t been to the White House since August 6 because their public health protocols were too lax. “My impression was their approach to how to handle this is different from mine and what I insisted that we do in the Senate, ” McConnell said, “which is to wear a mask and practice social distancing.” Maryland Gov. Larry Hogan, who is rumored to be considering a run for president in 2024, has always been a vocal critic of Trump. On Friday, he took it a step further by writing in Ronald Reagan for president on his ballot.

Republican politicians’ sudden desire to distance themselves from the president comes as Trump’s poll numbers continue to trail far behind former Vice President Joe Biden. With the election just weeks away, the president still hasn’t been able to articulate any policy goals for a second term. Instead, he has chosen to repeatedly lie about the course of the pandemic, attack his political opponents, and engage in racism on the campaign trail. The result is that more and more Republicans are planning for a post-Trump future.

It’s obvious that Republicans and conservatives are preparing to insist that they were on the right side of history. It’s what they always do. We already saw a glimpse of this time-honored tactic with the passing of John Lewis, Georgia congressman and longtime civil rights icon. McConnell and other Republicans who fought hard against Lewis’ life project of ensuring voting rights for all were suddenly praising Lewis’ work in their statements after his death, as I wrote in July:

I realized I was watching the time-honored practice of whitewashing of history. Over and over again, people who are attacked while fighting for the rights of the marginalized are embraced by the group that did the attacking. The duplicity was inevitable, but also useful: We witnessed the rewriting of history that has taken place with other great Civil Rights leaders by those who have done everything they can to oppose what they fought for in real time, unlike what happened with Rev. Martin Luther King, Jr., which took place over years.

Their effort to distance themselves from Trump is not unlike what happened in the post civil rights era. Though Martin Luther King, Jr. and the civil rights movement was largely unpopular during the 1960s, today many politicians claim to have supported the movement in its heyday and frequently cite MLK when talking about racial justice. If Republicans are successful in rewriting history once again, in 20 years, don’t be surprised if they claim to be the ones who actually stood up to Trump.