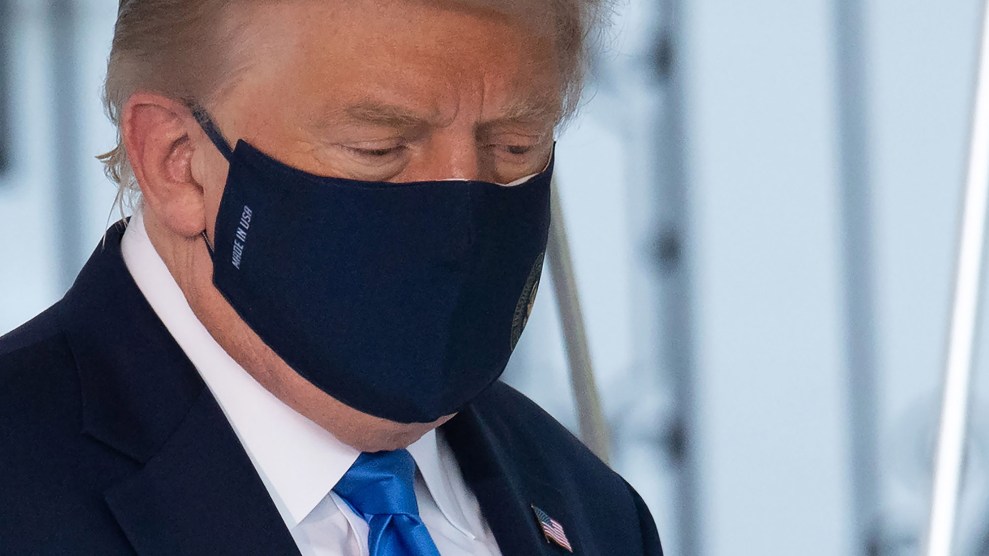 Even by the warped standards of the Trump era, the past few weeks have been an unusually exhausting blur, culminating in the shocking yet not entirely surprising news that the president has COVID-19. In case you’re trying to recall (or managed to forget), here’s how those three weeks of ongoing denial and dark hints of political chaos unfolded:

September 13: President Donald Trump holds an indoor campaign rally near Las Vegas, ignoring a state order limiting gatherings to 50 people. • Asked if he’s worried about exposure to the virus at an indoor rally, Trump says, “I’m on a stage and it’s very far away. And so I’m not at all concerned.”

September 15: Trump tells Fox & Friends that a vaccine will be approved “in a matter of weeks.” • At an ABC News town hall, asked why he’d downplayed the pandemic, Trump replies, “In many ways I up-played it in terms of action.” He says again that, even without a vaccine, the coronavirus will go away. “You’ll develop herd—like a herd mentality,” he says.

September 16: Attorney General William Barr says pandemic lockdowns and stay-at-home orders are the “greatest intrusion on civil liberties in American history” since slavery. • Department of Health and Human Services spokesperson Michael Caputo goes on medical leave after he claims that a “resistance unit” inside the Centers for Disease Control and Prevention is trying to undermine the president. • Trump claims that Democratic states are to blame for coronavirus death rates: “If you take the blue states out, we’re at a level that I don’t think anybody in the world would be at.” • Asked about CDC Director Robert Redfield’s comments that a vaccine wouldn’t be widely available before 2021, Trump insists 100 million doses will be available by the end of the year and says the CDC head “made a mistake.” • Joe Biden asks the president to prove that vaccine development is not being politicized. “I trust vaccines, I trust scientists, but I don’t trust Donald Trump,” he says.

September 17: The New York Times reports that HHS staff, not CDC scientists, wrote the agency’s recent recommendation that asymptomatic people with possible coronavirus exposure do not need to be tested. • Just over half of Americans surveyed say they would get a COVID-19 vaccine if it were available. • Olivia Troye, a former homeland security adviser to Pence who worked on the COVID task force, calls out Trump’s “flat-out disregard for human life” and endorses Biden. She says the president saw the coronavirus as positive because he would no longer have to shake hands with “disgusting people.”

September 18: The CDC backtracks, again recommending testing for asymptomatic people who may have been exposed to the coronavirus. • For the first time, the agency posts information about the transmission of the coronavirus via droplets that can travel more than 6 feet. • Due to the coronavirus, the Organization for Security and Cooperation in Europe says it’s cutting the number of monitors it will send to observe the November election from 500 to 30.

September 21: The CDC removes the new information about airborne transmission from its site, saying it had been “posted in error.” • Johnson & Johnson begins Phase 3 trials of a vaccine. • Trump tells Fox and Friends, “We’ve done a phenomenal job…On public relations, I give myself a D. On the job itself, we take an A+.” • At a rally in Ohio, Trump downplays the risks of COVID-19: “Now we know it affects elderly people with heart problems and other problems. If they have other problems, that’s what it really affects. That’s it…Take your hat off to the young because they have a hell of an immune system, but it affects virtually nobody. It’s an amazing thing.”

September 22: The Washington Post reports that $1 billion in funding directed to the Pentagon to buy medical equipment was mostly spent on military gear. • The US death toll passes 200,000, which represents more Americans dying in any discrete mass casualty event besides the Civil War, World War II, and the 1918 flu pandemic. • Outside the White House, a reporter asks Trump, “Why haven’t you said anything about the US hitting 200,000 deaths from COVID?” Trump ignores the question, but when he’s asked again about the milestone, he says, “Well, I think it’s a shame. I think if we didn’t do it properly and do it right, you’d have two and a half million deaths.

September 23: At a Senate hearing, Sen. Rand Paul (R-Ky.) suggests New York’s cases have dropped because it has achieved herd immunity. National Institute of Allergy and Infectious Diseases Director Anthony Fauci replies, “If you believe that 22 percent [infection rate] is herd immunity, I believe you are alone in that.” • The CDC reports that one-fifth of people with COVID in the US in August were in their 20s. • Trump says that any attempt by the Food and Drug Administration to impose stricter guidelines on emergency authorization of a vaccine “has to be approved by the White House.” • Asked if he’ll commit to a peaceful transition of power after the election, he answers, “We’re going to have to see what happens…Get rid of the ballots… and we’ll have a very peaceful—there won’t be a transfer, frankly. There will be a continuation.”

September 24: Trump, wearing a mask as he visits Justice Ruth Bader Ginsburg’s coffin on the steps of the Supreme Court, is jeered by people chanting “Vote him out!” • The US has had more than 7 million confirmed coronavirus cases.

September 25: A study finds that less than 10 percent of Americans have coronavirus antibodies, suggesting “herd immunity remains out of reach.” • Florida Gov. Ron DeSantis says all restaurants may reopen and suspends penalties for refusing to wear a mask.

September 27: Trump tweets that the Supreme Court striking down the Affordable Care Act “Would be a big win for the USA!” • Biden says that the effort to confirm Amy Coney Barrett before the election “is designed to take away the ACA and your health care in midst of a pandemic.” • Trump golfs at Trump National in Virginia.

September 28: Redfield is reported criticizing Trump’s coronavirus adviser Scott Atlas, saying “Everything he says is false.” Fauci tells CNN he worries a member of the coronavirus task force is giving Trump bad information. “I think you know who the outlier is,” he says. • The worldwide death toll passes 1 million.

September 29: Airlines brace for mass layoffs unless a new stimulus bill passes. Disney announces 28,000 layoffs. • The White House blocks Redfield’s attempt to keep cruise ships docked until next February. • At the first presidential debate, Biden slams Trump’s handling of the pandemic. “[Trump] said, ‘It is what it is.’ Well, it is what it is because you are who you are. That’s why it is. The president has no plan,” he says. “He knew all the way back in February how serious this crisis was.” Trump again mocks Biden for wearing a mask in public.

October 1: All New York City schools are open again. • Trump plans campaign rallies in Wisconsin, where cases are surging. • White House adviser Hope Hicks tests positive for the coronavirus. After finding out, Trump mingles maskless at a fundraiser. • At another event that evening, Trump declares, “The end of the pandemic is in sight.”

October 2: At 12:54 am, Trump tweets that he and Melania have tested positive for COVID-19.