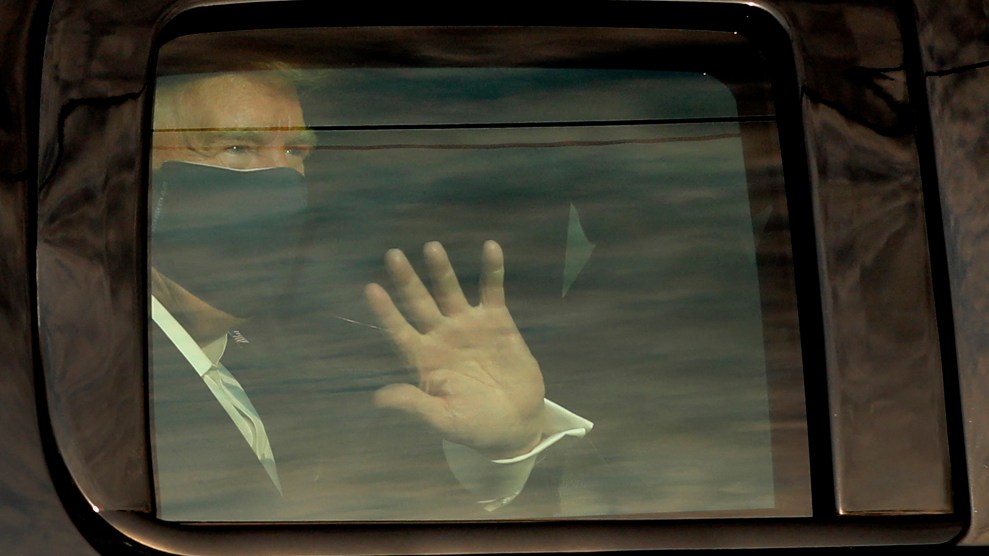 President Donald Trump announced via Twitter on Monday afternoon that he would soon be released from Walter Reed Army Medical Center. The president was taken to the hospital by helicopter on Friday after his case of COVID-19 worsened. Doctors told reporters over the weekend that he had been given supplemental oxygen and an assortment of treatments generally reserved for serious to severe cases.

Health shocks like this can sometimes change a person. They can give a new sense of perspective, bring to mind what really matters, or maybe convey the urgency of a threat previously blown off. Donald Trump is not an ordinary person, though. Here is what he tweeted:

I will be leaving the great Walter Reed Medical Center today at 6:30 P.M. Feeling really good! Don’t be afraid of Covid. Don’t let it dominate your life. We have developed, under the Trump Administration, some really great drugs & knowledge. I feel better than I did 20 years ago!

Even by his standards, this is repulsive. Trump’s takeaway from being airlifted to a hospital and at the center of an outbreak that has given his wife, close advisors, senators, and White House residence staff a potentially deadly virus is that COVID actually isn’t that bad. After all, he—a man with access to the best doctors in the world and treatments that are unavailable to many others—only needed to spend three full days in a hospital. This message is especially dangerous at a time when cases are once again on the rise in the United States, and places like New York City are enacting new restrictions to slow the spread.

Be afraid of COVID. Be afraid of getting it, be afraid of giving it to others, be terribly afraid of people you care about contracting it. Be afraid of what an pandemic—even if it doesn’t seem to affect you personally—means for your neighbors. (It’s good to care about other people, despite what the callous behavior of the Trump White House over the last week would suggest.) Be afraid of COVID even if you’re a ghoul and a sociopath and none of those things matter, because when people don’t properly fear COVID, everything shuts down and people get laid off and no one can pay their bills or buy food and there are many ways  for people to suffer without ever getting infected. Be afraid of COVID! It sucks. It can do plenty of terrible things to you even if you survive it—even if you’re literally in your twenties. It has killed well more than 200,000 people in the United States, and counting. It killed a thousand people just last weekend, and both those figures should be viewed as simply the minimum known number. It is killing people right now.

Be afraid! Because if everyone took the virus seriously, we’d all have a lot less to fear.