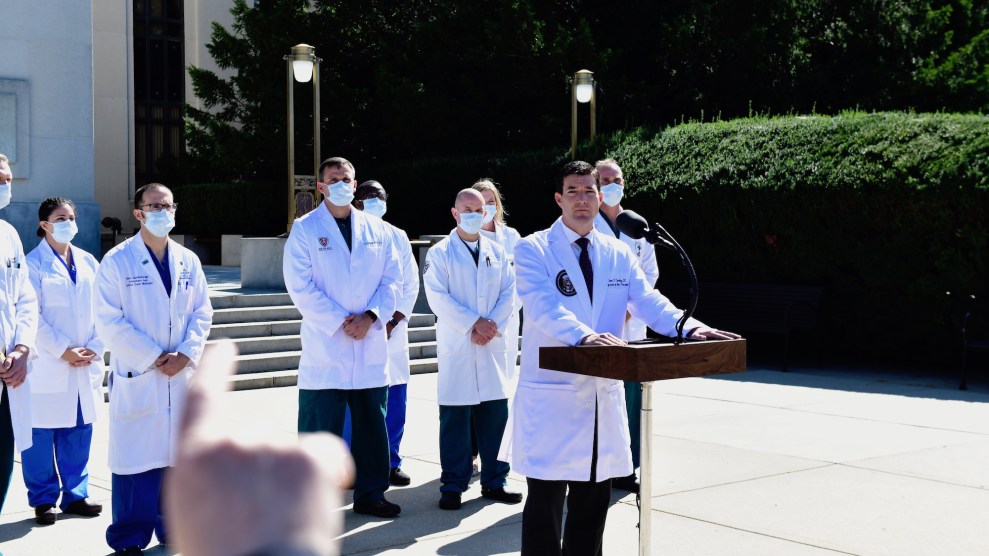 The team of doctors treating President Donald Trump for COVID-19 briefs reporters on the president's condition on October 3, 2020.Rod Lamkey/CNP via ZUMA Wire

White House physician Sean Conley said they were “extremely happy with the progress the president has made” since President Donald Trump was moved to Walter Reed Medical Center on Friday to be treated for COVID-19. But the briefing he and the team of doctors treating Trump gave on Saturday left a number of unanswered questions as to the precise nature of his condition—and raised others as to whether the White House has been truthful about the timing of Trump’s diagnosis.

One of the most serious questions from the briefing was the way in which Conley’s description of the president’s diagnosis and treatment didn’t match up with what previous official reports had indicated about the timeline of the his condition. Trump tweeted that he and First Lady Melania Trump had tested positive for COVID-19 around 1 a.m. on Friday morning. But Conley said that, as of the briefing on Saturday, the president had been 72 hours into his diagnosis. Another doctor treating Trump who spoke at the briefing said that the president had been administered a Regeneron antibody cocktail, an experimental treatment, 48 hours before, even though a White House press release announced that it had been administered after the president’s positive test—which, according to Conley had occurred on Thursday evening.

Nor would Conley answer when the president had his last negative coronavirus test, saying only that the president had been tested after news that Hope Hicks, the president’s senior aide, had tested positive for the virus on Thursday. He did not indicate the results of any tests potentially administered to the president in advance of Tuesday’s debate against Joe Biden or his Wednesday campaign rally in Minnesota—an appearance that was nearly half as long as his usual events.

According to Conley, Trump has been “fever free” for over 24 hours, and the symptoms the president had—which included shortness of breath and a cough—are “resolving and improving.” His medical team is encouraging him to eat, drink, stay hydrated— “working to do the things he needs to do to get well.” The president reportedly said he felt like he could “walk out of here today,” according to one of the doctors on his team.

But for all the optimism, there have been reports that Trump, in fact, could not “walk out” today. After the press conference, the White House press pool received a quote from “a source familiar with the President’s health” that said Trump’s “vitals over the last 24 hours were very concerning, and the next 48 hours will be critical in terms of his care.” The unnamed source added that he is “still not on a clear path to a full recovery.” (New York‘s Olivia Nuzzi noted that White House chief of staff Mark Meadows was caught on camera asking to brief reporters off-the-record after the press conference was over, but before the anonymous quote was sent out.)

The WH TV pool just received this quote from “a source familiar with the President's health…” – “The President's vitals over last 24 hours were very concerning and the next 48 hours will be critical in terms of his care. We are still not on a clear path to a full recovery."

UPDATE: Immediately after the press conference ended and before the anonymous statement was sent out, Mark Meadows briefed reporters without cameras—but he was caught on a feed asking to be off the record. pic.twitter.com/JyrhSmu1Y0

Conley very specifically not answering whether POTUS has been on oxygen at any point. Two sources close to POTUS tell me his blood oxygen levels dropped yesterday.

The decision to transport Trump to Walter Reed was announced amidst reports that his condition had been worsening. Conley insisted that moving the president there was “as a precautionary measure” to provide “state-of-the-art monitoring.” The White House said on Saturday morning that the president had begun receiving Remdesivir, an anti-viral medication. Conley said Trump would receive Remdesivir’s full five-day treatment course, as well as additional treatment including Regeneron, zinc, and aspirin.

Neither Regeneron and Remdesivir, nor any other treatments, have been officially approved by the FDA to treat COVID-19. Regeneron is still considered to be an experimental treatment and is in clinical trials. It is administered to patients under the FDA’s “compassionate use” guidelines, which allows doctors to administer such drugs on a case-by-case basis. The company reported in a recent press release that it has been shown to diminish COVID-19 symptoms and reduce a patient’s viral load. Remdesivir recently received the FDA’s emergency authorization for use in severe cases of COVID-19. The decision to give him both treatments so early, according to Conley, was made in the event there was “any possibility it would add value to his care and expedite his recovery.”

As to when Trump would leave Walter Reed, Conley would not say, noting only that the “first week is the most critical” in determining the severity of the illness. He noted that the “advanced therapies” the president had been given made it difficult to say where he was on the course of recovery. “Every day we’re evaluating ‘Does he need to be here?'” Conley said.

As reporters began to piece together the discrepancies in the timelines provided by Conley and White House, Wall Street Journal reporter Rebecca Ballhaus said a White House official corrected Conley: “He says Conley meant to say it’s Day 3, not 72 hours in—the diagnosis was made Thursday night—and that Garibaldi meant to say it’s been two days, not 48 hours, since the Regeneron was administered on Thursday night,” she tweeted.

But the conflicting information asks the public to choose between the word of a doctor and the word of the White House, neither of whom have demonstrated much openness or credibility regarding the president’s health.

You can watch the full briefing here.