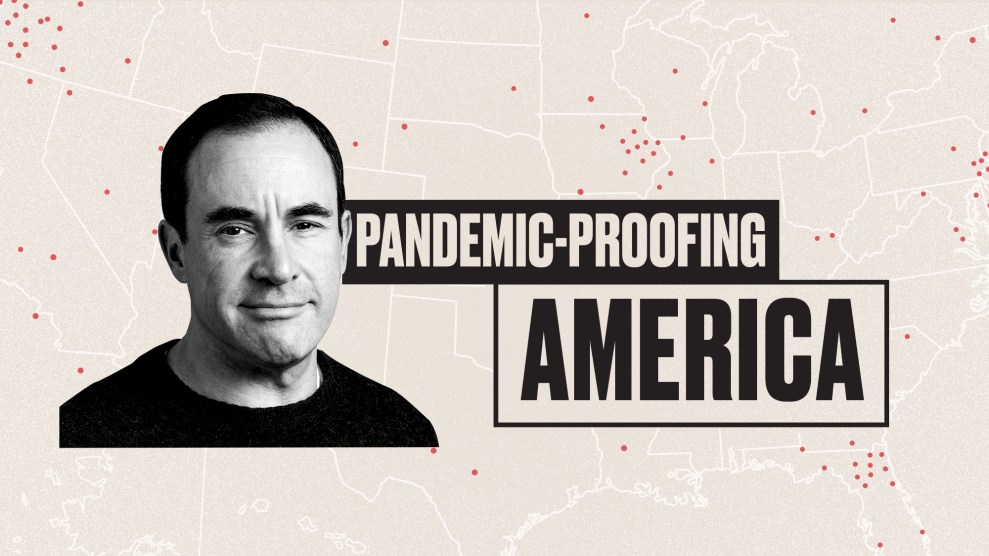 As the world grapples with the devastation of the coronavirus, one thing is clear: The United States simply wasn’t prepared. Despite repeated warnings from infectious disease experts over the years, we lacked essential beds, equipment, and medication; public health advice was confusing; and our leadership offered no clear direction while sidelining credible health professionals and institutions. Infectious disease experts agree that it’s only a matter of time before the next pandemic hits, and that one could be even more deadly. So how do we fix what COVID-19 has shown was broken? In this Mother Jones series, we’re asking experts from a wide range of disciplines one question: What are the most important steps we can take to make sure we’re better prepared next time around?

Throughout the course of the pandemic, epidemiologist Gregg Gonsalves, who is on faculty at both Yale School of Public Health and Yale Law School, has distinguished himself as a voice of reason on the political and social dimensions of the crisis, advocating for equity in testing and treatment. An expert on infectious disease modeling, Gonsalves began his career in the 1990s during the HIV/AIDS epidemic working extensively with activist organizations including ACT UP and the Gay Men’s Health Crisis to advocate for treatment. His history of HIV/AIDS work has given him a unique perspective on the art of effective science communication—and he’s emerged as a sharp critic of the Trump administration’s coronavirus response. “@realDonaldTrump would have had every scientist by his side if he had ever been serious about #COVID19,” he tweeted recently. “He turned to quacks, charlatans. Even a few hours after his defeat you can see what a real response might start look like without him.” I caught up with him to discuss the challenges that the Biden administration faces—not just in addressing the public health implications of the pandemic but also the legacy of anti-science messaging from the Trump administration.

On Biden’s coronavirus plan: The three co-chairs of Biden’s coronavirus task force [Yale physician Marcella Nunez-Smith, former US Surgeon General Vivek Murthy, and former FDA commissioner David Kessler] are superb. The Biden plan is good. It stresses all the right public health components, the need to have paid sick leave and economic support for businesses. But we’re going to need something much more substantial in terms of economic relief. The job numbers haven’t rebounded for women or for communities of color. Their plan mentions support for gig workers, but somehow it misunderstands the level of stress that people are experiencing.

A lot of people are subsidizing the wealthy getting to stay home. Grocery store workers who I see are often elderly women. They come across hundreds of people in a day. Our lives are being subsidized by people who are economically disadvantaged. We must figure out a way to help people survive based not on their gross annual income. We might consider paying people to stay home and isolate. If the choice is stay home or eat, it’s not much of a choice. All the behavioral economists say that you have to make the correct choices easy for people. So far we’re not doing that.

“Mitch McConnell doesn’t have a generous bone in his body, but this isn’t about politics, it’s about survival.”

Our biggest explosive outbreaks are in prisons and jails. What are we going to do about that? Biden’s plan doesn’t say anything about that or about dealing with warehouses or meat processing plants.

On how to heal the CDC: There are some amazing career people at the Centers for Disease Control, but how many people have left over the past four years because they just couldn’t take it anymore? It’s about rebuilding. They’ve been beaten down. Robert Redfield was such an utter disaster in the role [of CDC head]. As for a new head, [former New York City health commissioner] Mary Bassett would be up there for me. Mary understands that public health isn’t just about bugs and drugs, it’s about who we are as a nation. It’s really important to have someone who understands that this is a social and economic crisis as well as an infectious disease crisis. CDC people know this. It’s fine to have a physician in the post, but it needs to be someone who understands that it’s not just a biomedical problem.

On the irreversible damage from Trump: Trump poisoned the well on the pandemic response with his malfeasance and undermining of science. If there were no Trump, and we started from the baseline before 2016, we would have been in better shape. But now COVID-19 is raging across the country. We’ve had eight months of relentless anti-science rhetoric. We’re going to pay the price of that. Most people don’t know someone who is sick. All they know is, I lost my job and my kid is home from school. So talking about the economy and getting people back to work relentlessly is actually very clever. Biden can’t just issue a plan or present this as a public health crisis. People need to feel like their most immediate problems are being taken care of, too.

We have more COVID than ever before, and we’re going into the winter. People are starved for social interaction, and the holidays are coming up. These holidays are central to American life. Biden gets inaugurated in the middle of January, we’re losing two months. The Department of Health and Human Services is basically a ghost town, so many people have left. Biden is going to have to fill all these career positions.

Tony [Fauci] and to a lesser extent Deborah Birx have been marginalized. Tony is a civil servant so it’s hard to fire him. The main problem is that [White House COVID-19 adviser] Scott Atlas is going to be here for the next few months. The man is basically saying “Do nothing.”

On the vaccine trust deficit: Before COVID-19, we had vaccine hesitancy in the United States that was bipartisan. Now this dynamic is on steroids. Even on the left, you have, “Is this a Trump vaccine? Does it really work?” We could see an Emergency Use Authorization during the lame duck, but the distribution will all be under Biden. There will have to be a full-scale communications effort to convince people to take it. Most people will understand that the vaccine will help them not have to be distant from their families anymore. But people on the far right and far left will likely remain there.

On what Biden can do simply by changing the tone in the White House: Even without any legislation, we won’t have someone spouting misinformation from the White House anymore. He’s not going to be the charlatan-in-chief that Trump has become. He won’t be pushing hydroxychloroquine. You’ll get some truth-telling that it’s not going away tomorrow, that this is going to be a long haul, and that we’re going to have to come together. I don’t think this is about him being a Democrat. Both Presidents Bush would have been similarly inclined. This will go a long way, because right now, it’s really about how we behave with each other. It takes encouragement, which is what the president is supposed to do.