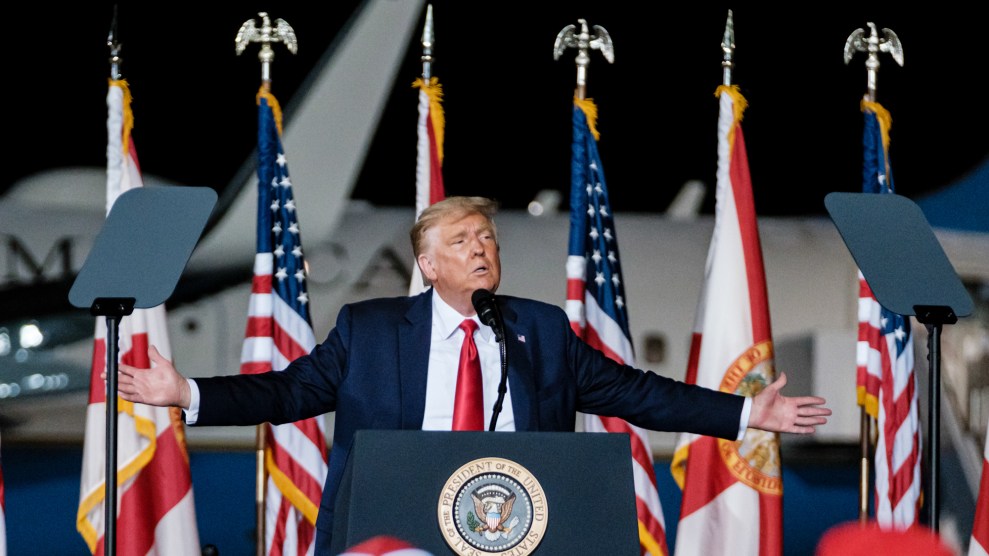 President Donald Trump has won Florida, keeping his hopes of reelection alive. Losing the state would have meant a quick and almost certain defeat for the president.

Biden did unusually poorly in Miami-Dade County, where polls showed Cuban Americans breaking heavily toward Trump. With most of the votes counted, Biden was leading by only about 6 points in the county. Hillary Clinton won there by nearly 30 points. Barack Obama had a 24-point margin of victory in 2012.

Biden is at least slightly outperforming Clinton in some areas outside Miami, where polling showed him doing better among non-Hispanic white voters. But it wasn’t enough to offset the huge setback in Miami-Dade County, and other counties where Biden is doing worse than Clinton did in 2016. Biden is also running significantly behind Clinton in Osceola County, which is majority Hispanic and home to a large Puerto Rican population.

Florida is particularly fast at counting votes. Early voting and mail-in ballots results were due to the secretary of state’s office within 30 minutes of the polls closing, and the state does not count ballots received after Election Day. Most polling locations in Florida closed at 7 p.m. ET.

The presidential race is almost always close in Florida. No Democrat has gotten 52 percent of the vote in the state since Lyndon Johnson signed the Civil Rights Act of 1964. In 2012, Barack Obama won Florida with 50.01 percent of the vote. Four years later, the state (barely) flipped back to Republicans and then stayed (barely) Republican in gubernatorial and Senate races in 2018, despite the national Democratic wave.

Heading into Election Day, this year’s presidential contest was another tossup, with nearly all the final Florida polls ending up within the margin of error. Between early voting and mail-in ballots, about 110,000 more Democrats than Republicans had voted. That was only slightly more than the 90,000-vote advantage Democrats had in 2016, when they ended up losing the state by more than 100,000 votes. But those early voting numbers didn’t show which candidates independents were supporting. Polls showed them breaking toward Biden after narrowly backing Trump in 2016.

Cuban Americans’ enthusiasm for Trump was evident in massive car caravans, the success of right-wing Cuban American YouTubers, and a Sunday night Trump rally in Miami-Dade County that drew thousands of people. Another sign of that excitement: About two-thirds of Hispanic Republicans had already voted by Tuesday, roughly 9 points above Hispanic Democrats. Matthew Isbell, a Democratic data analyst, found that Republicans were turning out in particularly high numbers in heavily Cuban areas of Miami-Dade County like Hialeah, where Republicans had a more than 20-point turnout advantage in some precincts a few days before the election.

Just how much support Biden lost among Hispanic voters is still unclear. A poll released by Telemundo last week showed the former vice president beating Trump by only 5 points among Florida Hispanics, a dramatic drop from when they favored Clinton by 27 points in 2016.

But the numbers were all over the place: The New York Times’ final Florida poll showed Biden ahead by 22 points among Hispanics, while the Washington Post found him leading by only 4 points. Regardless of the exact margin, Biden owed much of his lead among Hispanics to the state’s large share of Puerto Rican and Mexican American voters. Still, Trump was running about 12 points ahead of where he was in 2016 in majority-Hispanic districts, according to results from the Times.

What happened in Florida?

Biden made big gains in suburbs, seniors, and military

Trump made gains in rurals, but most important were gains where Hispanic Democratic turnout was DOWN (like OSC/HIL/ORA) – and a 22%!!!! swing in Miami-Dade #flapol pic.twitter.com/AYGjVGQkGH

South Florida Democrats spent years warning party leaders that Democrats had a major problem among Hispanic voters. The validity of those concerns was made clear after Democrats Bill Nelson and Andrew Gillum lost their respective Senate and gubernatorial bids in 2018. Both candidates’ biggest losses in Miami-Dade County came in heavily Cuban areas. Yet when I reported from Miami last month, many Hispanic Democrats told me little was done in the immediate aftermath of 2018 to fix the problems that plagued their party in the midterms. As I reported last week:

After Obama nearly won the Florida Cuban vote in 2012 following extensive on-the-ground organizing, Nelson and Gillum lost it by about 40 points.

The need to fix things before the presidential election was obvious. “Guess what was done?” said Amandi, the former Obama consultant. “Nothing.” Martínez agreed. “Where has the Democratic Party been? Where is it at? Nowhere to be seen.”

The Biden campaign boosted its efforts to win over Florida Hispanics about two months ago, when it announced a long list of new Latino advisers and increased spending on Spanish-language advertising. Those efforts appeared to help win back some Cuban voters. But it was out of the question that Biden would match Obama’s 2012 showing among Florida Cubans, when he nearly won a majority.

In 2016, Clinton wound up losing Florida because the state’s non-Hispanic white voters favored Trump by 32 points, according to exit polls. The final Florida polls from the New York Times and the Washington Post showed Biden doing at least 12 points better than Clinton among non-Hispanic white voters. Much of that increase appears to have come from seniors vulnerable to the pandemic Trump ignored.

Black voters remained the core of the Democrats’ base in Florida. Prominent Black Democrats in Miami-Dade County were concerned by early voting numbers showing that Republicans turned out more of their base in the county before Election Day. Rep. Frederica Wilson, who represents a majority-Black district, criticized her party’s decision to delay returning to knocking on doors during the pandemic. “I screamed,” she told Politico. “Hollered. I called. I lobbied from the top to the bottom.” But Black voters were also expected to make up a larger share of voters on Election Day than during early voting, and it’s too early to say whether the concerns about Black turnout proved premature.

Both campaigns made frequent stops in Florida in the final days of the campaign. Biden was in Broward County last week, and Obama came to Miami on Monday. Trump, who often spends his weekends at his Mar-a-Lago resort in Palm Beach, has been a constant presence in South Florida over the past four years. He returned to the Miami area for a final time on Sunday.

Trump’s rally in Opa-locka attracted thousands of people to a site that once housed Cuban refugees. Before the president arrived, the band Los 3 de La Habana played their pro-Trump salsa campaign song in front of Cuban flags. After getting onstage just before midnight, Trump blew through Miami-Dade County’s COVID-19 curfew as he addressed a tightly packed crowd. He stuck to the message that worked so well for Florida Republicans two years ago by portraying Democrats as Cuba-style communists. In 2020, it appears to have worked again.