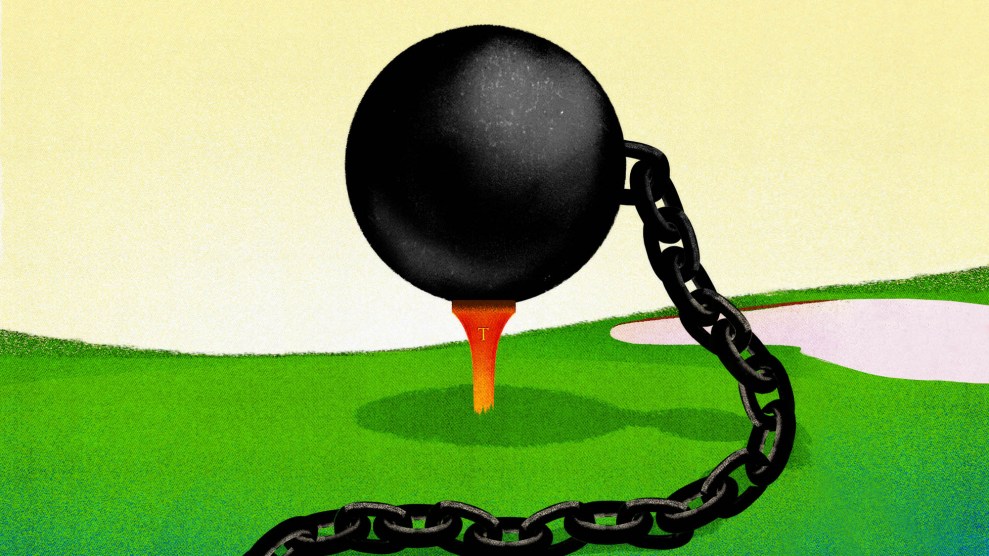 Hillary Clinton, Barack Obama, Joe Biden, James Comey, Christopher Steele, John Bolton, a Time journalist, flag burners—this is just a partial list of the people Donald Trump has wanted to see imprisoned during his ignominious presidency. Yet the moment he steps out of the White House, shedding the sheath of immunity that enshrines all presidents, it is Trump who should be most concerned about a legal reckoning. His list of alleged offenses, committed both during and before his presidency, includes tax and bank fraud, obstruction of justice, bribery, defamation, and more. Legal experts have even debated whether Trump could face criminal charges connected to his woeful response to the coronavirus pandemic.

In its 244-year history, the United States has never prosecuted a president (that is, outside the specialized judicial theater of impeachment). Not that some didn’t deserve it. The reticence is understandable. Locking up a former commander in chief would be politically divisive and potentially set a dangerous precedent. Would holding him accountable restore faith in the justice system or further erode it? But for Trump, whose antics and incompetence contributed to the deaths of tens of thousands, who attacked the very foundation of the democratic institutions that made the United States a beacon, and who pushed the nation to the threshold of autocracy, the American people might be willing, even eager, to take the risk.

Trump has offered state and federal prosecutors a buffet of options for criminal and civil charges. On the federal level, one of the most plausible crimes Trump could be charged with is obstruction of justice. In his two-part report on his Russia investigation, special counsel Robert Mueller all but laid out the case, chronicling Trump’s assorted efforts to stymie the probe. The report also includes evidence suggesting that Trump may have perjured himself in written responses to questions from Mueller’s team, though this claim is more difficult to prove. Mueller stopped short of concluding that Trump had committed a crime, but mostly because, as a sitting president, he was arguably immune from prosecution. But that protection no longer applies once he leaves office.

Barbara McQuade, a former US attorney in Michigan who led the corruption case against Detroit Mayor Kwame Kilpatrick, argues an obstruction conviction would be easy to obtain and is the most likely route for federal prosecutors. (McQuade spoke to Mother Jones before joining Biden’s transition team; she stressed that she was not speaking on the new administration’s behalf.) But the body of evidence is only one consideration when it comes to placing Trump, or any former president, on trial. “The second question a federal prosecutor must ask is, ‘Would a prosecution advance a substantial federal interest?’” she says. “When a president is involved, that’s a much harder question. I’m sure there is some sentiment that the country should move on, but perhaps some sentiment that we should not let a president get away with crimes with impunity just because they’re the president.”

Renato Mariotti, a former federal prosecutor in Chicago who specialized in busting white-collar criminals, is less sure about convicting Trump of obstruction or other crimes—and not because there isn’t a bounty of evidence. “How would the fact that it’s Donald Trump impact a jury?” he wonders. Nevertheless, he thinks an obstruction prosecution is warranted if only for the message it sends. “To me the best argument for taking action is a future deterrence argument,” he says. “Trump is somebody who was focused on defeating the lawful functions of the Justice Department, so taking action sends a signal that presidents should not do that again.”

Both prosecutors warn that any case against Trump must be as free of politics as possible, not just to convince a judge or jury to convict but also to restore confidence in the Justice Department and avoid weakening democracy in the process. One way to buffer the case from political calculations would be for the new attorney general to appoint a special counsel who could pursue the investigation independently. “I think we’ve learned a lesson, hopefully, from, let’s say, the mistakes of James Comey and his handling of the Clinton matter,” Mariotti says, recalling the FBI’s infamous investigation into Hillary Clinton’s email server before the 2016 election. “The best way to do it is to have an insulation from political appointees, and to essentially not have press conferences or anything like that—just make decisions about whether or not there’s anything worthy of prosecution and do it with as little fanfare as possible.”

Eager to turn the page on the Trump era, Biden, for his part, has expressed reservations about a federal prosecution targeting his predecessor. He has described such an effort as “probably not very…good for democracy,” though he’s also said he would not “interfere with the Justice Department’s judgment.” Kamala Harris took a different position on the campaign trail, saying the DOJ “would have no choice” but to pursue obstruction-of-justice charges against Trump.

According to the New York Times and other news outlets, Trump is keenly aware of the legal jeopardy he confronts as a private citizen and, as a result, was particularly fearful of losing the election. In fact, the possibility that he might be charged with a crime has been on Trump’s mind for much of his presidency. After the 2017 appointment of Mueller to oversee the Russia investigation, Trump declared in a tweet that he had the right to pardon himself. Some legal experts have speculated he might attempt such a gambit prior to leaving office.

However, says Philip Bobbitt, a professor at Columbia University who specializes in constitutional law, presidential pardon power is not unlimited. He raises what he says is a more likely scenario, similar to what occurred in 1974 when Richard Nixon resigned and was promptly pardoned by Gerald Ford. In the waning days or hours of his presidency, Bobbitt speculates, Trump could invoke the 25th Amendment and briefly surrender presidential authority to allow Mike Pence to pardon him. Alternatively, Trump could resign on the final day of his term, leaving Pence to momentarily assume the presidency and absolve his former boss of all federal crimes.

But a federal pardon will not help Trump at the state level, and it’s there where he and his company, the Trump Organization, may face the most legal peril. Two investigations targeting his company are underway in New York. Since 2019, New York Attorney General Letitia James has been probing the Trump Organization for bank, tax, and insurance fraud. One of the matters she is scrutinizing is whether Trump paid taxes on $50 million in forgiven debt related to his Chicago hotel and tower project. This aspect of her inquiry appears based in part on my reporting in Mother Jones, which revealed that Trump claims to hold a loan connected to a venture that may not exist. This potentially contrived liability may in fact be a scheme to dodge taxes on a debt, deeply discounted by a lender, that Trump paid off in 2012. (A loan is not taxable; forgiven debt is considered income.)

James’ case is civil, but it could nevertheless lead to steep fines, back taxes, and penalties. Moreover, her inquiry could provide fodder for criminal investigators, such as those in the office of Manhattan District Attorney Cy Vance. In 2019, following revelations that Trump had engineered a payoff of former adult film star Stormy Daniels to keep their alleged affair quiet during the 2016 election, Vance impaneled a grand jury to examine potential financial misconduct by Trump and his company. Since then, Vance has sought a variety of records from Trump’s accounting firm. Trump has battled the DA’s subpoena all the way to the Supreme Court, arguing that he was unfairly targeted. The court, however, cleared the way for Vance’s investigation to go forward. Court filings suggest Vance’s probe now goes well beyond the hush-money payment and may overlap with some of the issues James is investigating. Legal experts say that state-led cases may offer the best opportunity to hold Trump accountable while avoiding the polarizing debate that a federal prosecution could ignite. The investigations in New York also focus on matters that predate Trump’s presidency, unlike obstruction charges related to the Mueller probe.

In both New York cases, Trump and his lawyers have used delay tactics, deploying arguments that had little success in court but that substantially slowed the investigations. But soon Trump will no longer be able to use his office to stave off probes by claiming they are either politically driven or too time-consuming for a sitting president.

That may be just the start of his legal concerns. Media reports, and in particular the series of explosive New York Times articles based on copies of Trump’s tax records, may have left other breadcrumbs for investigators to follow in pursuit of Trump, his close associates, and his children. There’s also the possibility of yet-unrevealed investigations by state or local authorities, still lurking in sealed court filings.

And we’re just talking about the United States. In Scotland, where Trump has invested more than $200 million in his golf courses, lawmakers are pushing for their government to request an Unexplained Wealth Order to peer into Trump’s finances. This type of court order—invoked in the past against suspected money launderers—authorizes investigators to probe politically prominent individuals whose public spending does not match what’s publicly known about their finances.

Throughout his life, as he’s faced off against angry creditors or jilted business partners, Trump has honed a tried-and-true legal tactic of “punching back” at his antagonists—launching furious counterattacks that mired the other side in court filings and legal bills. Yet this strategy, as effective as it was when Trump was a private businessman, is unlikely to slow down prosecutors. “I think that when you are a private entity there are other equities you have to think about besides the outcome of the case,” McQuade says. “You have to think about your reputational risk, if he’s going to slam you in the press, and there’s a worry there’s going to be negative impact on your bottom line.” To a prosecutor, a defendant who blusters and threatens isn’t much of a deterrent. “Getting criticized is part of the job,” she says.

Attempts to hold Trump accountable in office were almost entirely unsuccessful. His loss in November was the first true check on his conduct. The next—which seems all but inevitable—may come in a courtroom.