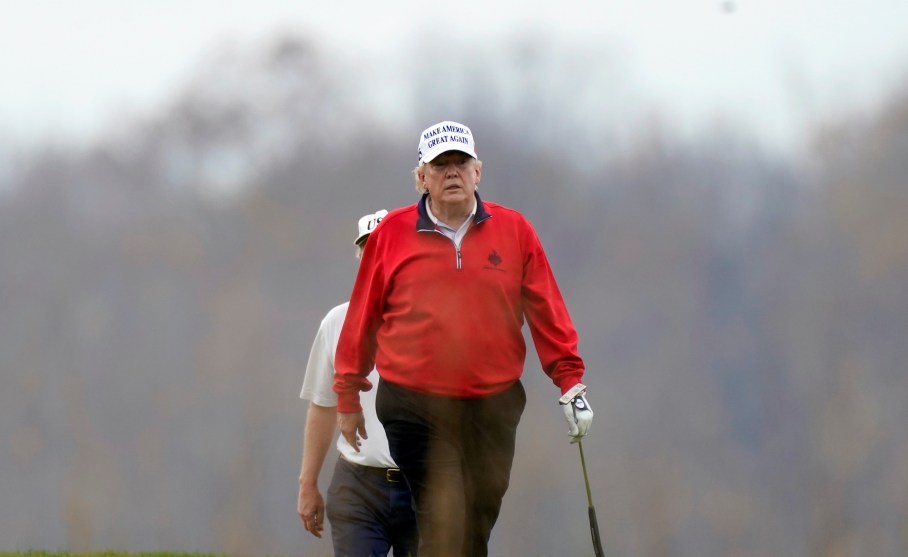 Donald Trump briefly attended a virtual world summit Saturday morning—long enough to brag about himself—and then returned to spending his morning as he does on any other weekend: golfing and tweeting.

The annual Group of 20 meeting was set to be hosted in Saudi Arabia this year, but due to the COVID-19 pandemic, global leaders have been meeting virtually this weekend. The virtual format has created some weirdness—like the familiar-to-most-Americans-by-now collage of faces on a screen virtually “meeting,” but populated by Russian president Vladimir Putin, Saudi King Salman, and Chinese president Xi Jinping—but it’s also drastically lowered the bar for how much effort a world leader needs to make to attend. Trump managed several minutes, and mainly the part in which he got to speak. And even that was weird.

According to audio obtained by the Observer newspaper, Trump opened by talking about how he plans on attending the meeting again, although he will leave office on January 20 and it’s a meeting for world leaders.

“It’s been a great honor to work with you, and I look forward to working with you again for a long time,” Trump reportedly said. He also falsely took credit for the development of two potential COVID-19 vaccines through his administration’s Operation Warp Speed. According to the Observer, no other world leader discussed their own domestic politics, and the majority of comments were focused on the global crisis and how to stop it. Bloomberg also reports that “[u]nlike other leaders, Trump did not speak of the need to share vaccines around the world, especially with poorer nations. He also urged fellow leaders to reject lockdown measures as a tool to control the virus, one official said.”

A number of leaders, including German chancellor Angela Merkel and French president Emmanuel Macron, returned to the virtual summit after the opening session to discuss the global handling of the pandemic more specifically. Trump instead was spotted heading towards the golf course, his 303rd visit to a golf course since he took office.