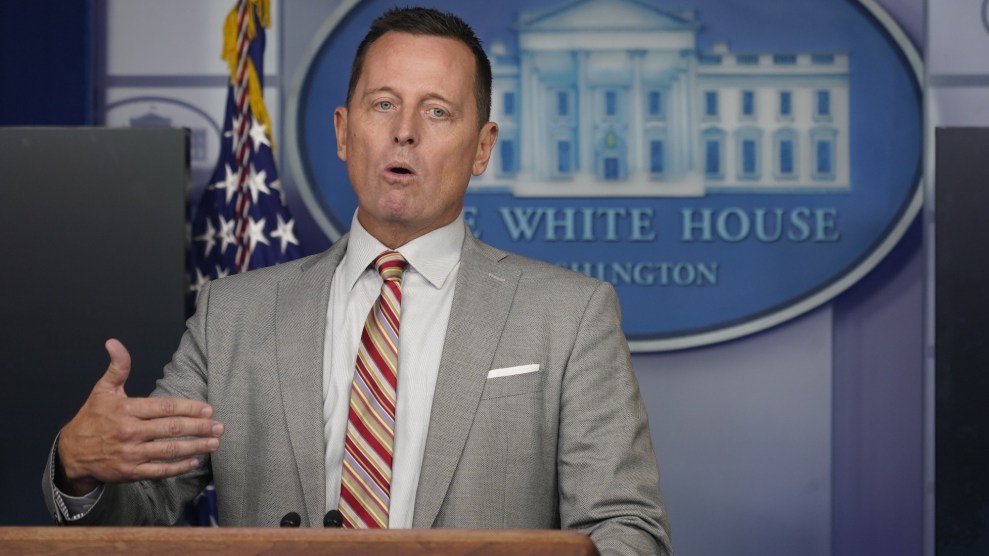 The primary source of disinformation in the 2020 campaign is not Russia, or any foreign state, but rather President Donald Trump and his administration. And a key culprit is Trump’s former acting director of national intelligence, Richard Grenell.

Grenell—who has also served as Trump’s ambassador to Germany and as a special envoy for peace talks between Serbia and Kosovo—on Sunday tweeted a photograph showing Joe Biden maskless on a plane, along with an image of Biden wearing a mask while outdoors. The tweet suggested that Biden is a “phony” whose mask use is nothing more than a public pose. But as legal scholar Steve Vladeck and others quickly noted, the photo of Biden without a mask is from November, before the pandemic. Grenell appears to have taken the picture from a Vogue Magazine article on Biden’s traveling press secretary, Remi Yamamoto, while omitting the caption that noted the date.

As anyone can see for themselves, the picture you've posted (nicely edited to crop out the caption and credit) is originally from a November *2019* @voguemagazine story—before anyone was wearing masks:https://t.co/Q8ntbf69qH

Confronted with his error, Grenell attacked those who flagged it, then posted another picture of Biden without a mask, this time ignoring the fact that it came from a drive-in rally where Biden wore a mask prior to taking the stage, where he spoke alone.

This is nothing new for Grenell, a noted Twitter troll. Last week, Grenell retweeted a false claim by an account with the username “Heshmat Alavi” that lobbyists for Iran had “established ties with the Biden/Harris circle.” This claim includes multiple layers of falsehoods. First, according to a report last year by the Intercept, Alavi “appears not to exist” but is instead a composite persona created by the radical Iranian opposition group Mojahedin-e-Khalq, or MEK. The nominal author was published widely in Forbes and in right-leaning outlets before the deceit was uncovered. MEK, based in Albania, exercises strict control over adherents that has drawn frequent comparisons to a cult. The State Department listed the group as sponsor of terrorism following its alleged involvement and in an attack on US soil in 1992, and in the killing of US citizens in Iran in the 1970s, before removing the group from the list in 2012. MEK aggressively lobbies in the US for the overthrow of Iranian regime. Mother Jones has reported that MEK has received vocal support on Twitter from a network of “likely bots along with real accounts and ‘cyborg’ accounts—accounts run by real people, but augmented with software to push posts faster and more frequently.” It’s unclear who is behind these Twitter accounts.

“Heshmat Alavi is a persona run by a team of people from the political wing of the MEK,” a high-ranking MEK defector told the Intercept. “They write whatever they are directed by their commanders and use this name to place articles in the press. This is not and has never been a real person.” In a subsequent blog post, a person identifying themself as Alavi acknowledged that is not the name of a real person, but claimed it was a pseudonym intended to protect “all of my family, friends and myself, both inside & outside of Iran, in complete danger.”

The Alavi tweet that Grenell promoted showed Sen. Kamala Harris (D-Calif.) standing near two women, Iranian-American journalist Negar Mortazavi and Yasmine Taeb, a senior fellow at the Center for International Policy, a think tank. It asserts they are former members of the National Iranian American Council (NIAC), which it falsely calls “Iran’s lobby arm in DC.” In fact, the event pictured was a January 29, 2017, protest in Washington of Trump’s Muslim ban—an event that Mortazavi and Taeb helped organize. Harris and Sen. Catherine Cortez Masto (D-Nev.) attended to support the protesters but have no other ties to the women, Mortazavi told Mother Jones. NIAC has supported diplomacy with Iran, including the Joint Comprehensive Plan of Action, or Iran nuclear deal, that was forged under the Obama administration. Those actions have led the MEK and right-wing advocates of Trump’s bellicose “maximum pressure” policy to accuse the group of lobbying for Iran. But there is no evidence for those claims. The organization denies them and is not a registered foreign agent. (Americans lobbying for MEK are registered as foreign agents.)

When I pointed out last week that Grenell had amplified false claims by a composite persona, the former director of national intelligence accused Mother Jones of “giving aid and comfort” to Iran’s rulers.

Grenell also made several false claims during remarks at the Republican National Convention in August that were aimed at bolstering Trump’s false “ObamaGate” assertions. Grenell said that “the Obama-Biden administration secretly launched a surveillance operation on the Trump campaign, and silenced the many brave intelligence officials who spoke up against it.” He also claimed that “Biden asked intelligence officials to uncover the hidden information on President Trump’s incoming national security adviser three weeks before the inauguration.”

A Washington Post factcheck faulted Grenell for bolstering “unfounded conspiracy theories” in those remarks. The FBI investigation into links between the Trump campaign and Russian entities was not ordered by former President Barack Obama or by Biden. The claim about Biden ordering an investigation into former national security adviser Michael Flynn relies on Biden’s attendance at a January 2017 White House meeting where Flynn was discussed. Handwritten notes by a former FBI agent suggest Biden may have mentioned the Logan Act, a law Flynn could potentially have violated through his secret contacts with Russia’s ambassador during the presidential transition. (Flynn was never charged with breaking this law.) But officials present have said they do not recall Biden saying anything at the meeting. And the FBI’s investigation into Flynn had started many months before that, rendering it impossible for the then-VP or Obama to have initiated the investigation into Flynn at the meeting.