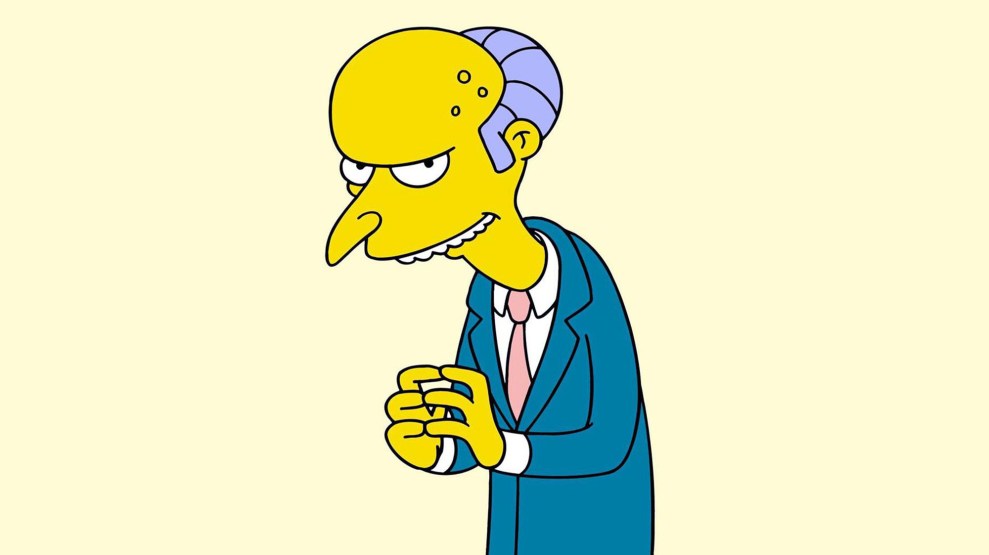 Mr. Burns would be pleased with the bill.20th Century Fox/Entertainment Pictures

Back in July, I wrote about how lawmakers from both parties were backing a COVID relief provision that, in effect, is a massive, unnecessary bailout for America’s richest business owners. Congress never managed to come together on that particular bill, so the effort was tabled for a while, but guess what: It’s back, and even better for the big fish.

The bipartisan provision, which is opposed by the IRS and also, oddly enough, by Treasury Secretary Steve Mnuchin, is known as a “double-dip” benefit. It allows businesses that get PPP loans—which the new COVID bill aims to expand—to not only have those loans forgiven, but to be able to deduct the loan amount spent on business expenses from their taxable income.

Getting one benefit or the other seems reasonable, but allowing both would be a major departure from accepted policy and an unprecedented waste of taxpayer money, critics say, that would primarily benefit wealthy law firms, accounting practices, and other well-to-do “pass through” businesses that have dominated the process.

On December 2, the New York Times reported that about one-quarter of all the PPP money went to just 1 percent of the recipients, including highly profitable businesses, including white-shoe law firms run by Donald Trump’s personal lawyer, Marc Kasowitz, and celebrity lawyer David Boies.

Steven Rosenthal, a tax attorney and senior fellow at the nonprofit Tax Policy Center had calculated that the earlier version of the double-dip proposal would have amounted to a stealth break of $100 billion to $150 billion, skewed heavily toward the nation’s wealthiest business owners. Martin Sullivan, an expert in federal tax law and former staff economist for both the Treasury Department and Congress’ bipartisan Joint Committee on Taxation, estimated the cost, back of the napkin, at roughly $100 billion.

The latest package is expected to expand the PPP program and make the loans more flexible—and thus more easily forgiven. In a blog post, Adam Looney, a senior fellow at the Brookings Institution, points out that “for the relevant group of pass-through business owners, about 70 percent of business income is earned by the top 1 percent of taxpayers. Hence, most of those deductions would be used by high income-taxpayers and save them $0.37 to $0.396 in taxes for each dollar they deduct. He continues…

The bipartisan proposal—the final bill that comes to the floor may be different—provides about $268 billion more in PPP funds. If we assume the total PPP funding will come to $700 billion and the average tax rate of business owners is 29 percent, that is a tax windfall of $203 billion. Even if only 60 percent of this goes to the top 1 percent, that’s a $120 billion windfall for well-off business owners.

“It’s hard to imagine a tax cut that is so large in magnitude and still so targeted to those who need it least,” Looney says in an email.

My earlier piece cites Kimberly Clausing, an economist at Reed College who specializes in trade and taxation, and who had taken to Twitter to explain why the double-dip makes little sense. (I changed the numbers, but same idea.)

Suppose your small business has $1.5 million in sales and $1 million in payroll and other allowable costs. The pandemic hits and sales drop to $500,000. Damn! Your $500K profit just turned into a $500K shortfall. So you land a $1 million PPP loan. You follow the rules and your loan is forgiven. Clausing offers three scenarios:

Scenario 1: The IRS treats your loan as taxable income, so your overall income is now $1.5 million, as before. But the tax agency lets you deduct the payroll and other expenses covered by your $1 million loan. You are left with $500,000. “This reflects the true profitability of the firm,” she writes.

Scenario 2: The IRS lets you exclude your forgiven loan from taxable income, but it does not allow you to then deduct the covered business expenses. The outcome is the same. You still end up with taxable income of $500,000, and your employees get paid. This is the scenario the IRS favors.

Scenario 3: Here’s the double-dip scenario. The IRS lets you exclude the forgiven loan from your taxable income and lets you deduct those business expenses. Now you have $500,000 in income and $1 million in deductible expenses. You report a $500,000 loss on your taxes, even though you actually made $500,000. This is a giveaway to business owners and the wealthiest investors—who own, according to a 2019 Goldman Sachs analysis, 56 percent of the total value of all equities, public and private, held by U.S. households—none of whom would be under any obligation to pass that money along to the workers.

“The wage deduction should not be allowed if loan forgiveness is not included as income,” Clausing tweeted. “Doing otherwise is both very expensive and unnecessary. It also sets a bad precedent for tax policy in the future.”

Some businesses are in desperate straits, of course, and need our help. But if Congress wants to bail out independently owned bars and restaurant and so forth, there are better ways, Rosenthal says. They could means-test the double-dip, or cap the size of the companies allowed to apply. (In the first round, famously, big restaurant chains owned by private equity firms raked in PPP cash.) But to allow a double-dip across the board is bad financial stewardship, he says, not only from the Party of Trump, but also the Democrats—who are equally on board. (House Dems passed a double-dip provision in their doomed HEROES Act.)

One prominent Democrat who questioned the arrangement is Texas Rep. Lloyd Doggett. “Allowing a deduction for an expense never incurred is unjustifiable,” he told Mother Jones in July, adding, “This approach provides the most for the insiders who got the biggest and quickest PPP loans.”

But the lobbying has been intense. “There are a lot of wealthy business owners who are applying very heavy pressure in every congressional district in the country. We can’t even get the usual champions to stand up on this one,” Rosenthal says. “We’re going to lose.”