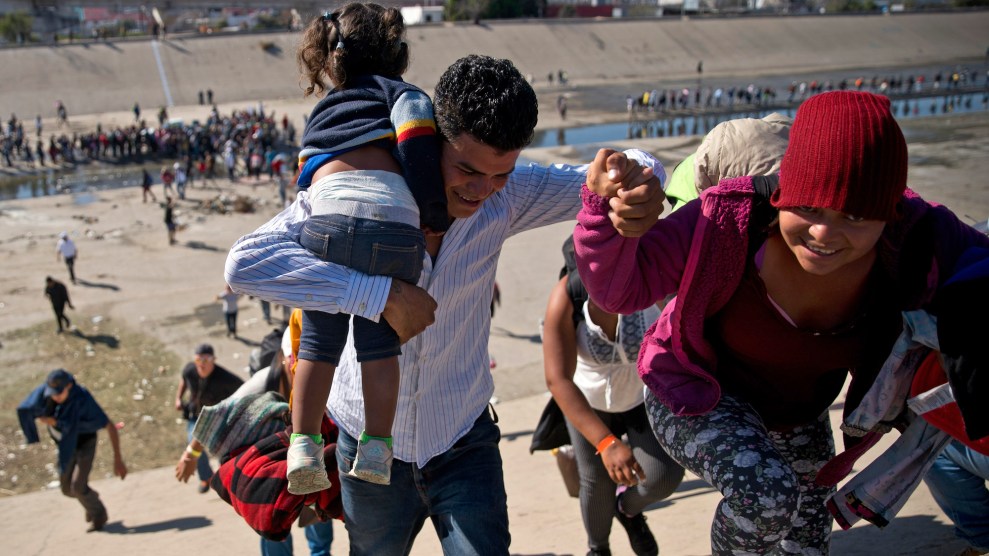 Migrants walk up a riverbank at the Mexico-US border near Tijuana as they try to reach the United States. Ramon Espinosa/AP

In recent weeks, devastating hurricanes in Central America, a northbound caravan of migrants from Honduras, and a spike in the apprehension of unaccompanied minors at the United States–Mexico border have generated headlines about an imminent immigration “crisis”—one, some have claimed, that might be exacerbated by more lenient policies in a Biden administration.

“If you assume that you don’t want any of these people coming in, no matter how many or how few, it obviously seems like a crisis,” says Yael Schacher, an immigration historian at the global organization Refugees International and the author of a report released Friday titled “Building Better, Not Backward: Learning From the Past to Design Sound Border Asylum Policy.”

But there’s another way to look at it, she says—as an opportunity to finally fix 30 years of failed, costly, and often cruel deterrence policies. To end a “cycle of crises,” it becomes necessary to change the paradigm. “For the first time in decades,” she says, “we need to think how we can actually allow, receive, and welcome them in a way that’s fair rather than presume from the get-go that our goal is to keep them out.”

Schacher, who is writing a comprehensive history of asylum in the United States, notes in the report that immigration policies for the southern border were by and large conceived to push asylum seekers and migrants away. She lays out recommendations for the Biden administration on how to adopt screening and admission practices that are both more humane and more effective.

Schacher is not alone: Other immigration scholars and advocates are pushing for a similar shift in mentality. “The policies we are suggesting are ones that would implement a vision of a welcoming approach and that this is about humanitarian protection and not national security,” says Kennji Kizuka, who researches refugee policy at Human Rights First. “These are not just pie-in-the-sky kind of requests, but they are based on US law and treaty obligations and the expectation that the US lives up to what used to be its best traditions.”

It’s no small task to mitigate, if not reverse, the damage from the last four years of draconian measures aimed at toughening the immigration system at large and gutting asylum. Hundreds of parents and children separated at the border as a result of the zero-tolerance policy have yet to be reunited. More than 67,000 asylum seekers have been forced to wait in Mexico under life-threatening conditions, and the majority of asylum cases that have gotten a hearing have been denied. Since March, as many as 13,000 arriving unaccompanied minors have been expelled under an emergency decree purported to be a public health measure.

But the policies of the Trump administration did not occur in a vacuum. Since the late 1980s, both Democratic and Republican administrations have sought to prevent migration through deterrence, from detention and separation of families to the construction of border fencing. But there have also been periods of what Schacher calls “humanitarian and constructive policies.” She points to 1975, at the end of the Vietnam War, when US helicopters lifted and then resettled thousands of Southeast Asian refugees, and to the 1990s, when public pressure and litigation led Congress to create paths to permanent residency for Central Americans fleeing wars.

Following the 1992 election, Democrats broke their promise of a more humanitarian immigration approach. After criticizing George H.W. Bush’s policy of turning away Haitians fleeing widespread violence in the aftermath of a military coup, Bill Clinton continued to intercept arriving boats and sent thousands of refugees to Guantanamo to be repatriated later. In 1996, he signed a law that Schacher describes as having “kept us in the wrong track,” and helps explain much of what is broken about the current immigration system.

The Biden administration has an opportunity to do better, Schacher argues. So far, the president-elect has promised to end the so-called Remain in Mexico policy but hasn’t taken a definitive stance on the Centers for Disease Control order shutting down the southern border during the pandemic. Although immigration advocates agree that these would be critical first steps, they argue that more action is needed.

Instead of insisting on decades-old policies to block people already on the move, organizations say a new government could shift resources from enforcement operations to programs that serve as alternatives to detention, as well as to border shelters and to local and public health authorities receiving and providing services to asylum seekers. Eventually, Schacher suggests, the government could set up “humane reception centers” along the border with appropriately trained immigration officials and social workers providing legal orientation.

There will be other pressing needs, such as fixing the immigration courts and addressing a growing backlog of cases. But advocates and public health experts have said that allowing people seeking protection to have access to the border, and then treating them right, shouldn’t be negotiable or politicized.

“This anxiety about the surge is about disorder and chaos, but there’s a fair and orderly way to deal with the border,” Schacher says. “The issue of creating a manageable system is not a matter of can we do it, but do we actually want to?”