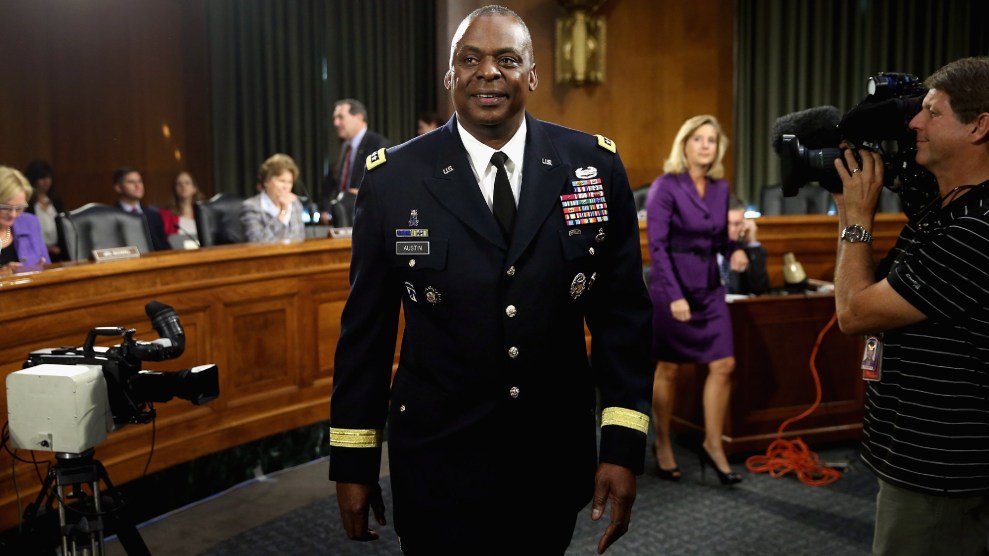 Joe Biden, in defending his decision to nominate retired Army Gen. Lloyd Austin as his Defense secretary pick on Tuesday, cited Austin’s “intimate knowledge of the Department of Defense and our government,” adding that those qualities make him “uniquely matched to the challenges and crises we face.” Outside of government, those qualities were also uniquely matched to a post-military career spent cultivating ties between people in power and the defense industry.

After retiring from the Army in 2016, Austin joined the board of a defense industry giant, set up his own consulting firm, and became a partner at a private equity firm that invests in defense and aerospace companies. He quickly cashed in, earning at least $1.4 million since he joined the board of United Technologies Corp. in 2016. Earlier this year, UTC merged with Raytheon, giving Austin a seat on the board of one of the country’s most powerful defense contractors. Last year, Raytheon received more than $16 billion in federal government contracts, the fourth-most of any company.

The progressive flank of the Democratic Party, which has debated how to oppose Biden’s Defense secretary pick even before the announcement, expressed concern with Austin in a barrage of statements on Tuesday. Common Defense, a veterans group, called his nomination “a grave, democracy-threatening mistake.” Win Without War Executive Director Stephen Miles said the “historic nature of this nomination is indeed laudable,” but called on Austin to “address the ethics concerns raised by his connection with Raytheon” and “at minimum, commit to recusing himself from any decision relating to Raytheon.”

“They have exploited these connections to keep the bombs flowing. How well equipped will General Austin be to resist these pressures? Will he tip the scales in favor of his former company?”

The Massachusetts based contractor has made off particularly well by selling weapons to Saudi Arabia and its allies as part of the controversial Saudi intervention into Yemen’s civil war, an ongoing catastrophe that has spiraled into the world’s worst humanitarian disaster. “Since the Yemen war began, Raytheon has booked at least a dozen major sales to the kingdom and its partners worth more than $5 billion,” the New York Times reported in May. Congress has repeatedly passed resolutions that oppose further sales to Saudi Arabia and its Middle East allies, but firms like Raytheon have relentlessly lobbied the Trump administration to keep the spigot flowing, despite American weapons being connected to massive civilian casualty events in Yemen. President Trump has vetoed bills to block arms sales in the past and is expected to do so again, pending how Congress votes on similar legislation this week.

If Austin’s gets a seat in Biden’s Cabinet, it raises questions of how sincerely he believes in Raytheon’s activities and whether he would advocate for a continued transfer of weapons. Last year, Biden called for the United States to stop providing financial and military support for the Saudi war in Yemen, reversing a policy that originated under the Obama administration. He also said he would make Saudi Arabia, which has come up for increasing criticism in Congress since its state-sanctioned murder of Washington Post journalist Jamal Khashoggi, into “a pariah.”

Under Trump, who appointed former Raytheon lobbyist Mark Esper as Defense secretary, Raytheon has been able to secure influence at the highest levels of government. “They have exploited these connections to keep the bombs flowing. How well equipped will General Austin be to resist these pressures? Will he tip the scales in favor of his former company?” says William Hartung, director of the Arms and Security Project at the progressive Center for International Policy. “These are questions that should not need to be asked—these kinds of potential conflicts should not be present in an independent secretary of Defense able to make the right decisions on arms to Saudi Arabia and other key security issues.”

In recent years, the boardrooms of major US defense contractors have become something of a feeder school for senior Pentagon leaders. Trump’s three Defense secretaries who served for any extended time—James Mattis, Patrick Shanahan, and Esper—had roles at General Dynamics, Boeing, and Raytheon before joining his administration.

“If President-elect Biden is serious about enacting reform upon taking office, he would be better served by a Defense secretary without ties to one of the top five contractors. We need defense leaders who are ready to make decisions that are right for the American people, not former industry officials who stand to be influenced by their ties to contractors,” said Mandy Smithberger of the Project On Government Oversight, which tracks the industry ties of current and former government officials. “The revolving door between the Defense Department and industry has contributed to far too many decisions that benefit defense contractors at the expense of the American public, and I’m disappointed to see that Biden isn’t committed to mitigating industry influence on the government.”

Austin’s nomination was applauded by the Congressional Black Caucus, who pushed for Biden to nominate a Black Defense secretary, but many other Democrats in Congress have already voiced opposition to his nomination—a point that especially matters for this Cabinet position, since Austin would require a congressional waiver to serve as Defense secretary. He only retired from the Army four years ago and federal law requires a seven-year cooling off period before a military leader can serve as secretary of Defense, a civilian role. (The cooling off period initially extended for 10 years, but Congress reduced it in 2007.) Mattis, who was in a similar situation as a retired Marine Corps general, ultimately received a waiver from Congress, but some prominent Democrats who opposed a waiver for Mattis, including Sens. Elizabeth Warren (D-Mass.) and Richard Blumenthal (D-Conn.) have said they will similarly not support one for Austin. Rep. Elissa Slotkin (D-Mich.), who worked at the Pentagon while Austin was leading US troops in the Middle East, said she has “deep respect” for his work, but “choosing another recently retired general to serve in a role that is designed for a civilian just feels off.” She didn’t rule out voting for his waiver, but her reluctance speaks to some of the frustration among Democrats that Biden would pick a retired general after the outsize influence military leaders had at the Defense Department over civilian officials during Mattis’ tenure.

Austin’s 41 years in uniform evidently didn’t disqualify him in Biden’s eyes. Industry connections haven’t appeared to hurt Biden’s national security appointees either, many of whom served outside of government in similar consulting jobs. Avril Haines, Biden’s nominee for director of national intelligence, was a principal at WestExec Advisers, a consulting firm co-founded by Secretary of State nominee Antony Blinken and Michèle Flournoy, an ex-Obama Defense official who was among Biden’s finalists for the Defense secretary job. Austin, Flournoy, and Blinken are all partners at Pine Island Capital Partners, a private equity firm founded by former executives at Merrill Lynch, Coca-Cola, and Goldman Sachs, though Blinken is currently on leave. A spokesperson for the firm did not immediately respond to a request about Austin’s status; he joined the firm in late July, according to a press release on its website. Austin also sits on the board of Nucor, an American steel producer, and Tenet, a health care firm.

“Joe Biden has pledged the most ethically rigorous administration in American history, and every cabinet member will abide by all disclosure requirements and strict ethics rules—including recusals when appropriate,” Andrew Bates, a Biden spokesperson, said in a statement, adding that Austin, if confirmed, would “divest of his interest in Pine Island and in Raytheon.”

Pine Island’s holdings include two defense contractors: InVeris Training Solutions, which produces “advanced technology-enabled virtual and live-fire training systems,” and Precinmac Precision Machining, which makes parts for rocket launchers and other weapons. InVeris, formerly known as Meggitt Training Systems, was a subsidiary of a British firm that signed multiple contracts to produce parts for the F-35, the troubled aircraft that has been plagued by years-long problems. Congress has held multiple hearings related to production problems with the F-35, the most expensive weapons program in US history, and pressured Lockheed Martin—the contractor who gave work to Meggitt—to pay back the US government for the cost of defective spare parts. Before being acquired by Pine Island, Meggitt Training Systems signed a $78 million contract with an undisclosed Middle Eastern government to build an outdoor training facility. Congress will have the opportunity to probe those business deals at Austin’s confirmation hearing, which is shaping up to be one of the more unpredictable ones of the early Biden administration.